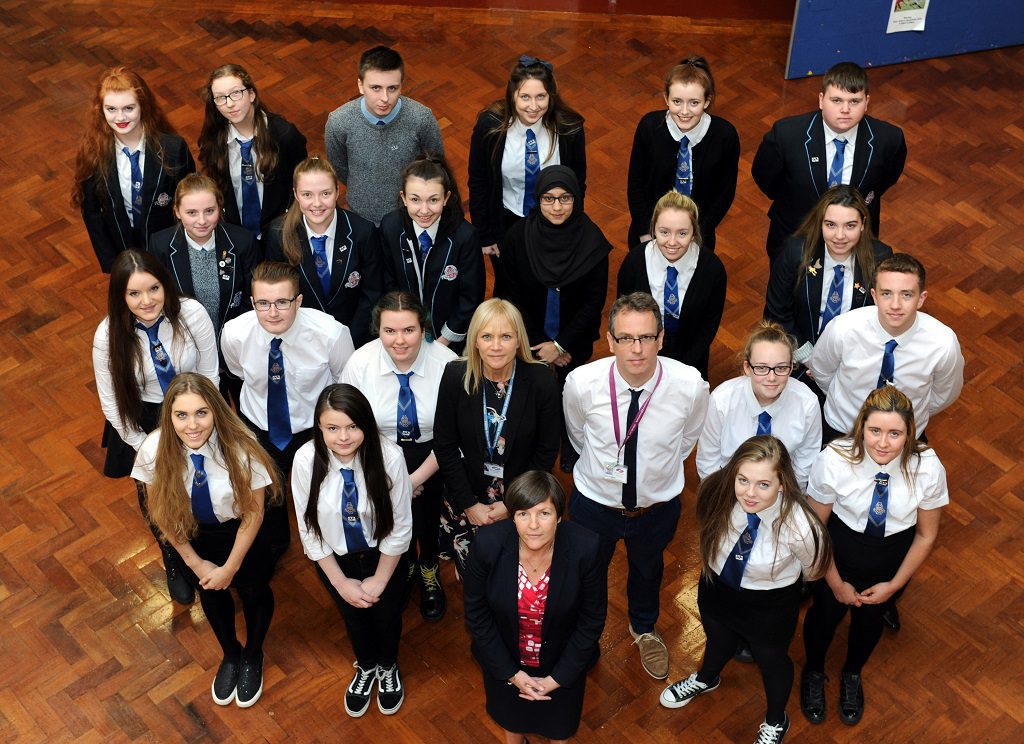 Senior pupils at a Paisley school are stepping into the shoes of their teachers – as they help lead the way on a ground-breaking programme to tackle bullying and abuse. The unique role reversal will see S5/6 pupils at Paisley Grammar teaching younger children on how to deal with conflict, challenge violence and abuse, and stay safe online.

The older pupils have been trained to act as mentors to youngsters in S1 and 2 – and soon will be leading their own lessons to the younger classes. It’s all part of the Mentors in Violence Project (MVP) – a globally-recognised programme which equips people to challenge bullying and abusive behaviour.

Paisley Grammar is the first school in Renfrewshire to work on the project, under the direction of the school’s head teacher Janice Levens, who took up her post earlier this year.

Janice said: “MVP is a perfect fit for the school’s values, which we are doing a lot of work to promote – learning, honesty, respect, fairness and trust.

“We think the idea of pupils as mentors is a great one – not only are they helping the younger ones but they are developing a skillset they will need in the future.”

The person who brought MVP to Renfrewshire is teacher Fiona Hewitt, who is based at Paisley Grammar and has the role of co-ordinating the programme across the area.

She said: “Paisley Grammar is the first school in Renfrewshire to have completed the mentor training but we will soon be rolling that out in Renfrew High and Johnstone High too.

“So far 35 staff have been trained to deliver MVP, and not just teachers but community leaders, Homelink workers, and educational psychologists too.

“The programme also takes in an online element – these days so much of teenagers’ lives are now lived through the internet.

“So MVP takes in topics such as online behaviour, use of words and insults, and the dangers of sexting – pupils will get the chance to deliver lessons to the younger ones which include those things.

“But we try not to preach to the pupils – the programme is more about giving them options on how to deal with a situation and equipping them to make good decisions.”

There’s an old saying that sticks and stones will break your bones but names will never hurt you – but senior pupils at Paisley Grammar are aiming to show the second part of that isn’t always true.

A group of around 30 S5/6 pupils are being trained in how to set a good example for their younger counterparts by being positive role models for them to follow – a key part of MVP’s philosophy.

Annie Campbell of S6 said: “The younger ones might not always see what is hurtful and how it might hurt someone. People can say something is just banter but it can be harmful.

“So we are trying to show them what they say can offend people. I feel honoured to have been given the chance to help the younger years.”

Fellow S6 pupil Rachel Smith added: “We are teaching them how to react to certain situations and how that does not always mean putting yourself in the line of fire.

“There are other options depending on the scenario. Sometimes that could be just talking between friends – you could pull one person aside and speak to them.”

Pupils have been learning about MVP’s bystander approach – which aims to create a culture where abusive behaviour is challenged rather than tolerated.

Nathan Black of S5 added: “So far we have learned about how to be an active bystander, which is someone who tries to stop what is happening, and not a passive bystander who just watches.

“For us, we have learned a lot about confidence and working as a team.”

MVP is one of the longest-running and most widely influential gender violence, sexual harassment and bullying prevention programs in the world.

Founded in 1993 in the USA as a way to tackle sexual abuse, it since has inspired countless people to challenge and change social, cultural and institutional norms that support abusive behaviour.

It centres around ‘the bystander approach’ and the training has three key aims –
– To help students develop a range of options for intervention in specific situations and scenarios;
– To create a culture that motivates everyone to get involved in challenging and interrupting abuse, and where abusive attitudes, beliefs and behaviours are seen as unacceptable, uncool and unwelcome;
– To help people develop the skills to become leaders and mentors to others around preventing abusive relationships.