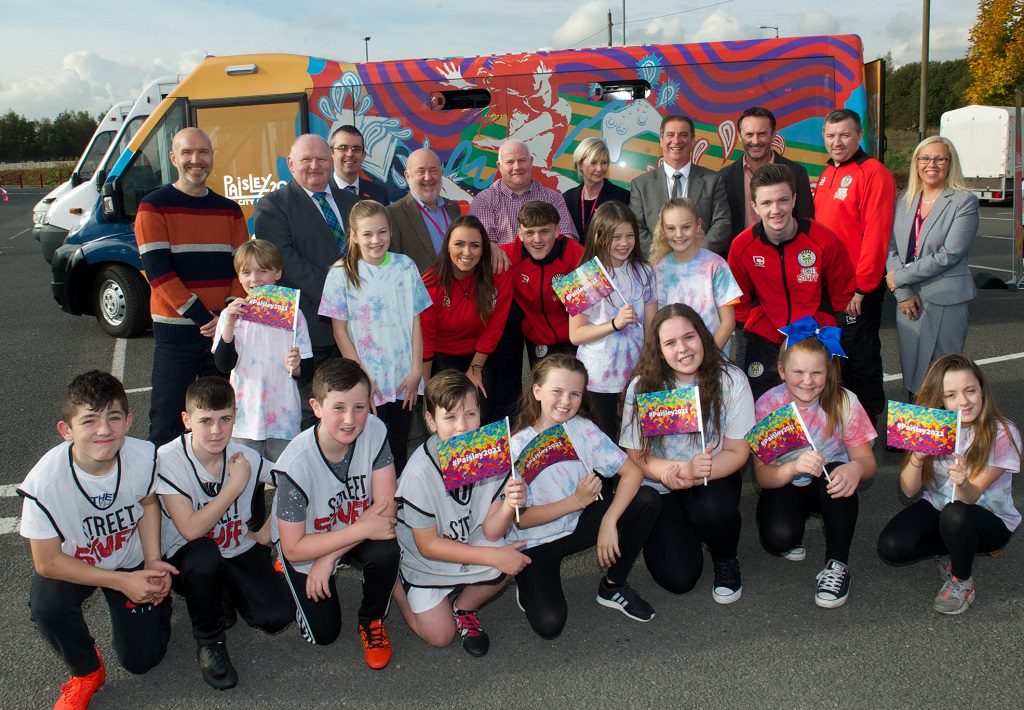 Paisley’s bid for UK City of Culture 2021 is hitting the road on a grand tour of Renfrewshire – thanks to the area’s award-winning Street Stuff youth scheme. Street Stuff staff, councillors plus repreentatibes of St Mirren with some of the boys and girls taking part in the camp

Street Stuff is a council-led partnership which has helped cut youth disorder locally by 75% since 2009 through offering activities including football, dancing and mobile youth clubs for young people in selected areas.

And the Street Stuff fleet has been boosted with the addition of a ‘culture bus’ –designed by the young people themselves after a consultation with more than 250 of them led by the Paisley 2021 team and Street Stuff staff.

The inside is equipped with the latest video-game consoles as well as DJ decks and other musical equipment.

The brightly-coloured graffiti-style artwork on the exterior of new bus was produced by a group of Street Stuff attendees working with Paisley-based visual artist Duncan Wilson.

Street Stuff is run by a partnership including Renfrewshire Council, St Mirren FC, Police Scotland and Scottish Fire and Rescue.

And staff involved in managing the project gathered at the Paisley 2021 Stadium, to see the culture bus for the first time before it set off around Renfrewshire.

The stadium was a busy place during the October school holiday, with St Mirren running football coaching in the club’s Airdome and dance classes inside the stadium.

There was also some catwalk action in the form of a fashion show featuring some of the young people who designed their own bespoke tie-dye T-shirts.

Street Stuff holiday camps across the area also provided free meals to all attendees during the week, thanks to the council’s Tackling Poverty Programme, which funded an extension of the scheme.

Renfrewshire’s Street Stuff champion, Councillor Eddie Devine, said: “Street Stuff has made a huge difference in the areas where it operates over the years – last year saw more than 37,000 attendees and 4,500 healthy meals provided.

“It’s also a great example of what partnerships can achieve – ourselves, St Mirren, the police and fire brigade have all played a role in what has been a nationally-recognised success, and everybody involved is immensely proud of that.

“Street Stuff also links together some of the biggest projects happening across the area at the moment.

“Paisley’s bid for UK City of Culture 2021 aims to harness the power of creativity to help change people’s lives, and key to that is creating opportunities for young people to engage in whatever form of culture means most to them.

“The new bus was only made possible by the input of the young people who already take part in Street Stuff – they told us what they wanted inside it.

“It also means we can take cultural activity to all areas of Renfrewshire and make it easier for people in all areas to enjoy the benefits.

“And at the same time, Street Stuff is a key part of the council’s innovative programme to tackle poverty – the holiday camps are making sure pupils continue to get a free healthy meal and activity even outwith the school term.”