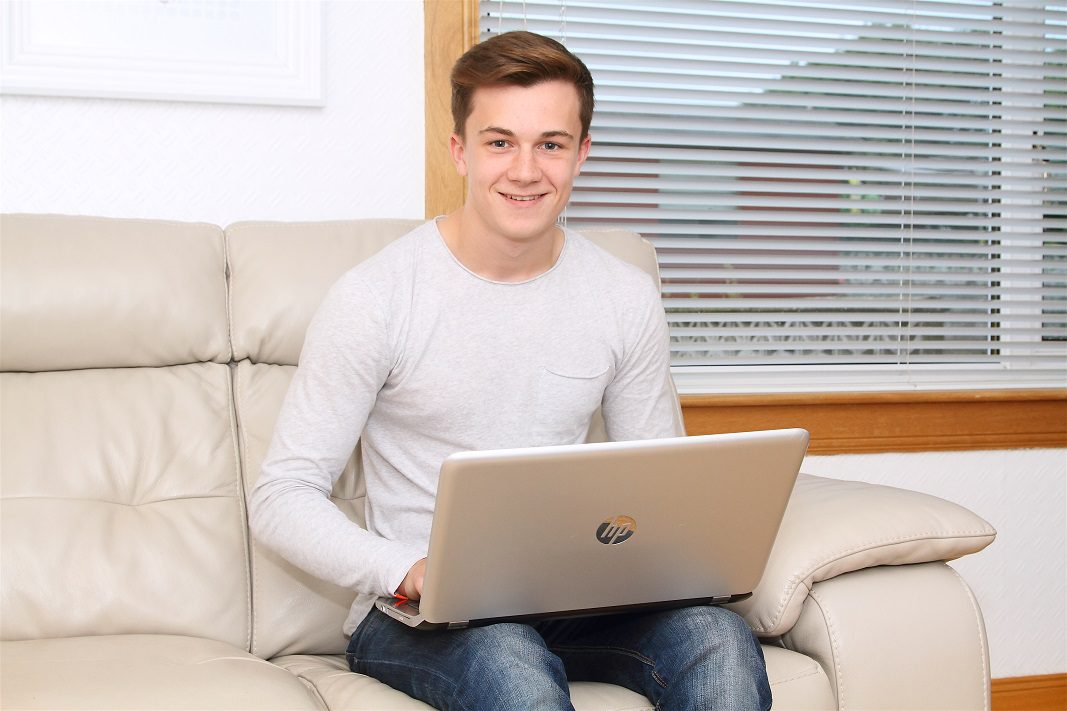 A Linwood resident has become one of three students to be awarded grant funding as part of a new national bursary scheme from Chivas Brothers, the Scotch whisky and premium gin business of Pernod Ricard – securing £1,000 towards a further education course in Aircraft Engineering. Adam Donnelly, whose mother Jacqueline works as a payroll analyst at Chivas Brothers’ Paisley site, took one step closer to his dream of becoming an aeronautical engineer when he was accepted into Ayrshire College’s Aircraft Engineering HNC (Higher National Certificate) course earlier this year. The course forms an essential part of Adam’s plan to continue the subject at university in 2017 – but he was concerned about the cost of travel for the one-hour commute between his home and the college. After hearing about the newly launched Chivas Brothers Bursary scheme, he decided to apply.

Adam explains: “Getting a place at Ayrshire was a real milestone for me, because my long-term plan is to take my studies to degree level, and ultimately get a job as an aeronautical engineer. My only worry was covering train fares between Linwood and the college in Ayr three times a week. My mum had been sent a copy of the bursary application at work, and noticed that it was open to both Chivas Brothers staff and their direct family members. She sent it on to me and told me to go for it! It feels amazing to have been chosen as one of the three successful candidates.

“The £1,000 grant will make a big difference over the next year. It means I can put all my own savings towards my actual studies, rather than just travel. I’ll be able to invest in books and resources for the course and focus on getting the results I need for university. I’ve got my sights set on Glasgow or Strathclyde, which are the best in the UK for aeronautical engineering – it will be hard work but I’m up for the challenge!”

Introduced for the first time this year, the Chivas Brothers Bursary has been developed in partnership with the Scottish International Education Trust (SIET). The SIET was set up in 1971 to help talented men and women fulfil their personal and professional goals by providing them with grants to complete further study. The launch of the new bursary scheme makes it easier for employees and their families to apply for support from the SIET, with up to £5,000 a year on offer over the next three years. It follows a £100,000 donation by Chivas Brothers to the SIET last year, and complements an ongoing employee development programme that has seen the company invest extensively in professional training for its staff.

Anthony Schofield, Public Affairs Director at Chivas Brothers, says: “The new Chivas Brothers Bursary marks our ongoing commitment toengaging and inspiring our people, and giving back to the communities where we work. We’ve been incredibly impressed with the high level of applications we’ve had for the scheme in its inaugural year. We’re very pleased to be supporting Adam in his journey to become an aeronautical engineer, and want to congratulate him on his excellent application.

“Adam’s experience is testament to his drive and passion for his subject. He missed out on a place at university this year, but didn’t let that deter him from his career goals. Instead he plans to reapply next year after further study at college. We wish him the best of luck for a successful HNC at Ayrshire and what is undoubtedly a very bright future.”

Chivas Brothers counts some of the world’s leading whisky and gin brands as part of its portfolio – including Chivas Regal, Ballantine’s, The Glenlivet, Royal Salute and Beefeater gin – and has opened the new bursary scheme to employees at all of its 32 sites, which span Orkney, Speyside, Central Scotland, Ayrshire, London and Plymouth.

Also awarded funding under the 2016 Chivas Brothers Bursary scheme were Mia Forbes, whose father works in the company’s London offices, and Laura Caban, whose grandfather works at its Glasgow site. Mia is putting her grant towards a Classics degree at the University of Cambridge, and Laura will be using her funds to help cover costs during an undergraduate degree in Acting for Stage & Screen at Edinburgh Napier and Queen Margaret universities.