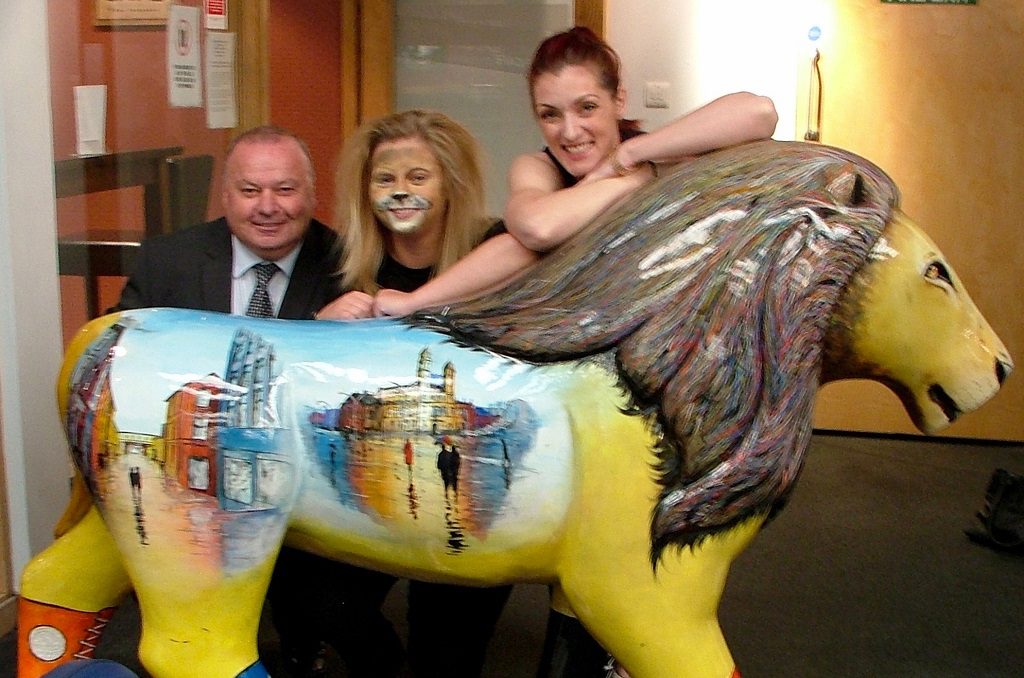 Buddies are being urged to prowl around town and put themselves in the frame before the Pride of Paisley disappear from the streets on Sunday night. (Sept 25). Ian Henderson,chairman Paisley First, Gayle Brannigan, chief executive Pro-Life and Julia Barclay who works at the gym but is going on the prowl at the weekend and of course Colourful Paisley

The lions, which have been a roaring success, will be rounded up and taken to their den where they will stay until they line up for public auction on Friday, October 21.

But before they go Pro-Life Fitness Centre and Paisley First have joined forces in a bid to give folk the chance to snap up some great prizes by taking a memorable picture on the unique Lions Trail. Three people will win a year’s membership to Pro-Life in New Sneddon Street with goodie bags up for grabs too during the main event this weekend.

All you have to do is visit the 23 lions in the town centre – Glasgow Airport is excluded – and record the visit either on the Paisley First app or in picture form.

There will be prizes for the funniest method around the route – like getting a lift in a wheelbarrow for example. Then another free year’s membership for the most unique mode of getting around the trail – perhaps on a space hopper maybe – and another prize for the most impressive lion for those who dress up. The winning pictures will be chosen from those taken at Pro-Life’s lion, Wild Paisley which is no 11 on the trail at Oakshaw Trinity church.

He said: “We are delighted to support this initiative by Pro-Life and it is a great idea to encourage everyone to see the Lions during a fun event before they are rounded up.

“The competition and generous prizes are an added attraction and I am sure that Pride of Paisley will enjoy a final flurry of activity.”

Gayle Brannigan, chief executive at Renfrewshire Sports Charity which runs Pro-Life,  added: “The lions have been a wonderful addition to the town and everyone thinks they are just brilliant.

“Every time we have one here in the gym people just love it. We’ve had Colourful Paisley here for a while after he was brought home from Glasgow’s Central Station and he’s been a star attraction.

“I’ve been so impressed with the staff and volunteers at Paisley First and when the manager Andrew Mitchell was looking for something to bring it all to a close we came up with the idea of giving everybody the chance to win a year’s membership to Pro-Life.

“We work hard here and our motto for members at the moment is that if you want to be a lion you have to train with the lions. That’s what we’re giving people a chance to do.

“I think we will all be sorry to see them go but pictures last a lifetime so it’s worth getting snapping and saving the memories. The fact that we’re giving three people the chance to get fitter and healthier is an added bonus.”

To register to take part call Pro-Life on 0141-889 5027 or call in at the centre on 98 New Sneddon Street. Entries can be posted on Pro-Life’s Facebook page or emailed to info@prolifefitnesscentre.com

You must complete the trail to enter and can do it any time from now until the lions are caged on Sunday night.

Mr Henderson revealed: “Tickets are now available for the Lion Auction dinner at the Normandy Hotel on 21st October when all 25 Lions will be sold without any minimum reserve price.

“Open to the public and priced at £36, they are available from the Paisley First Office, PACE, online, Eventbrite and several other outlets in the town.”

The Pride of Paisley trail runs until Sunday, September 25 and has been an overwhelming success, bringing more than 20,000 visitors to the outdoor exhibition

JOHNSTONE BANDS MOVING UP IN THE WORLD
Scroll to top