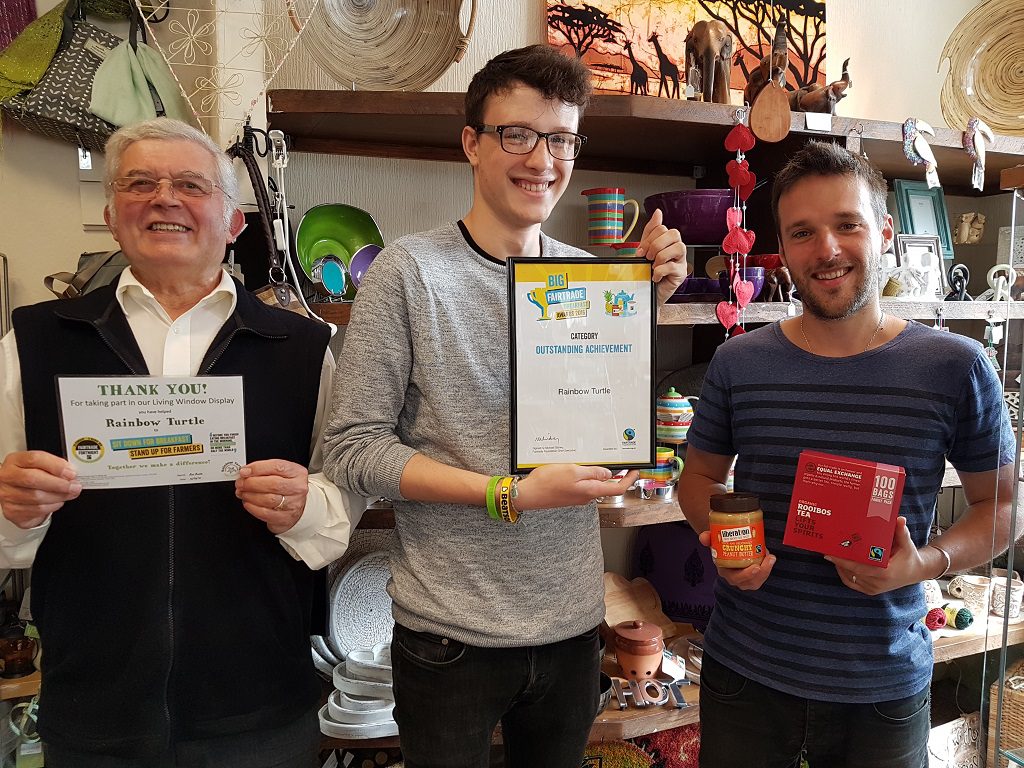 Innovative Renfrewshire charity Rainbow Turtle have won a national award for their work during this year’s Fairtrade Fortnight. The charity was awarded the Outstanding Achievement Award by the Fairtrade Foundation for their ‘Living Window Display’.

Public figures, volunteers and members of the public were invited to eat breakfast in the window of the Rainbow Turtle shop on Gauze Street in Paisley to highlight the ‘Sit down for breakfast, Stand up for farmers’ campaign.

The campaign centred around Martin Luther King’s quote “Before you finish eating breakfast in the morning you’ve depended on half the world.”

His words were used to encourage people to tackle injustice and to support farmers and workers to put food on their families’ tables, by harnessing the power of a Fairtrade breakfast.

The collaborative and imaginative event encouraged consumers to think about their breakfasts and provided opportunities to engage with Fairtrade.

Councillor Jim Sharkey, Chair of the Renfrewshire Fairtrade Steering Group, said: “This is a fantastic achievement and it is great to see a Renfrewshire charity being recognised on a national level.

“I took part in the ‘Living Window Display’ myself and saw firsthand how it drew the attention of passers-by and engaged them with the campaign’s message.

“I am delighted that a member of the steering group has received this kind of recognition and I would encourage anyone that has an interest in fair trade to enquire about joining the group.

“We are always looking for new members to help support the activities completed by our local groups- such as Rainbow Turtle- and advance the fair trade message across Renfrewshire.”

For more information on fair trade in Renfrewshire or how to join the steering group, visit: www.renfrewshire.gov.uk/fairtrade