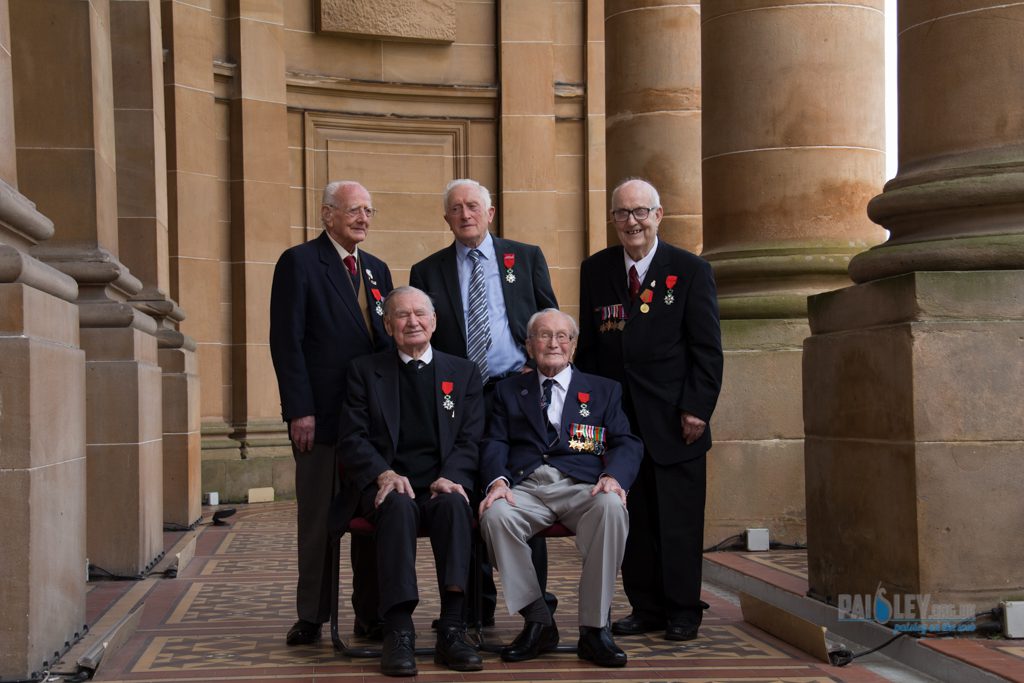 Five Scottish veterans were rewarded for their role in the liberation of France with the awarding of the Legion d’Honneur- the highest French military honour. photos taken by Robert Moore on behalf of Paisley.org,uk

On the 70th anniversary of D-Day in June 2014, the French President announced that the distinction would be awarded to all British veterans who fought to liberate France during the Second World War.

The medals are awarded in appreciation of the bravery of those who fought to preserve the emancipation of France.

The Consul General de France, Emmanuel Cocher, presented the former servicemen with their medals at a civic reception held at Paisley Town Hall.

photo taken by Robert Moore on behalf of Paisley.org.uk

Emmanuel Cocher said: “France will never forget the gallantry and bravery veterans showed in taking part in the liberation of France 70 years ago.

“The actions and sacrifice of these men, and that of so many who fell on the battlefield, was instrumental in bringing back freedom and peace in France and across Europe”.

The Légion d’Honneur was established in 1802 by Napoléon Bonaparte and is France’s highest distinction- awarded in recognition of both military and civilian merit.

Veterans must have taken part in military operations in France between 1944 and 1945 and, on average; just 10 British nationals per year receive the Légion d’Honneur.

Renfrewshire’s Provost Anne Hall said: “I’m delighted the bravery of our veterans is being acknowledged and I wholeheartedly support the decision of the French President to honour our soldiers and the part they played in the liberation of France.

photos taken by Robert Moore on behalf of Paisley.org,uk

“Our Armed Forces make incredible sacrifices in order to keep our country safe and it is important that we recognise their endeavours wherever possible.

“These are five men that we can be extremely proud of and I was thrilled to host this reception to recognise their achievements.”

All veterans, including Royal Navy or Royal Air Force, who served in France between 1944-45 are eligible to apply for the honour and can do so via  www.gov.uk/government/publications.