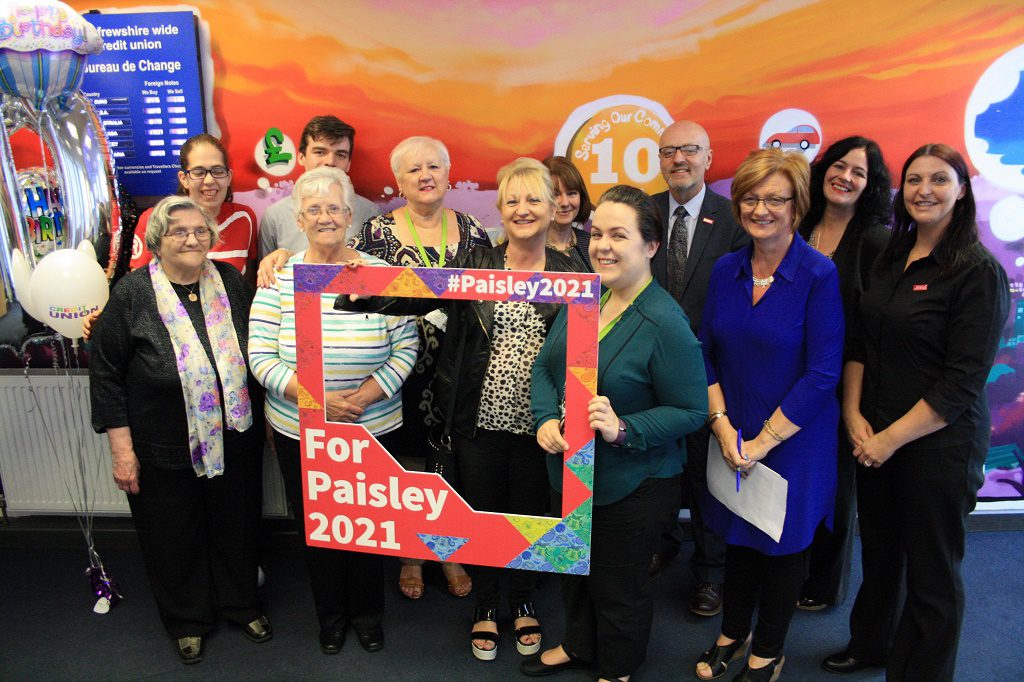 Renfrewshire-Wide Credit Union extended an invitation on Friday 15th July to a public unveiling of a specially commissioned community artwork, to celebrate the credit union’s 10-year anniversary of their people helping people commitment and their proud support for the Paisley 2021 City of Culture bid. RWCU’s Manager, Karen Graham, said: “In 2006 a group of volunteers from different local areas decided to work together, to ensure that everyone who worked or lived in Renfrewshire had access to a credit union. From their hard work Renfrewshire-Wide Credit Union was born. Ten years later Renfrewshire-Wide Credit Union is proud to be serving our community to provide access to affordable, ethical financial services, as well as working with local schools to educate our young people on the benefits of saving via the RWCU Cash Cubs program. “To mark the occasion and in support of the Paisley 2021 City of Culture Bid, we commissioned up-and-coming local artist Ross Dinnett to paint a mural. The mural captures the hopes and lifestyle aspirations of the members we serve, helping them to achieve their dream wedding, holidays or a new car, but also helping them through tough times such as loans for an unexpected bill or the passing of a loved one incurring unplanned funeral costs.

“Our aim at Renfrewshire-Wide Credit Union has always been to promote ethical, affordable financial choices. We believe that our credit union services and products offer the people of Renfrewshire a great value, community-based alternative to the poor deals offered elsewhere.

“Some of the original volunteers who worked hard to bring Renfrewshire-Wide Credit Union to the people of Renfrewshire continue to volunteer week after week. In fact two of our volunteers, Betty Anderson and Margaret Gourlay, recently received the Provost Award for Voluntary service having clocked up over 60 years of service to the community of Renfrewshire. Their dedication really brings the idea alive that ‘together we can achieve greatness’.

“Our 10-year anniversary is a great example of what can be achieved by ‘People helping People’. We look forward over the next 10 years to helping the people of Renfrewshire make the most of our fantastic savings and loans, enjoying our new mural and hopefully seeing a bit of themselves in our vibrant new artwork.”

The unveiling took place on Friday 15th July at 11am.