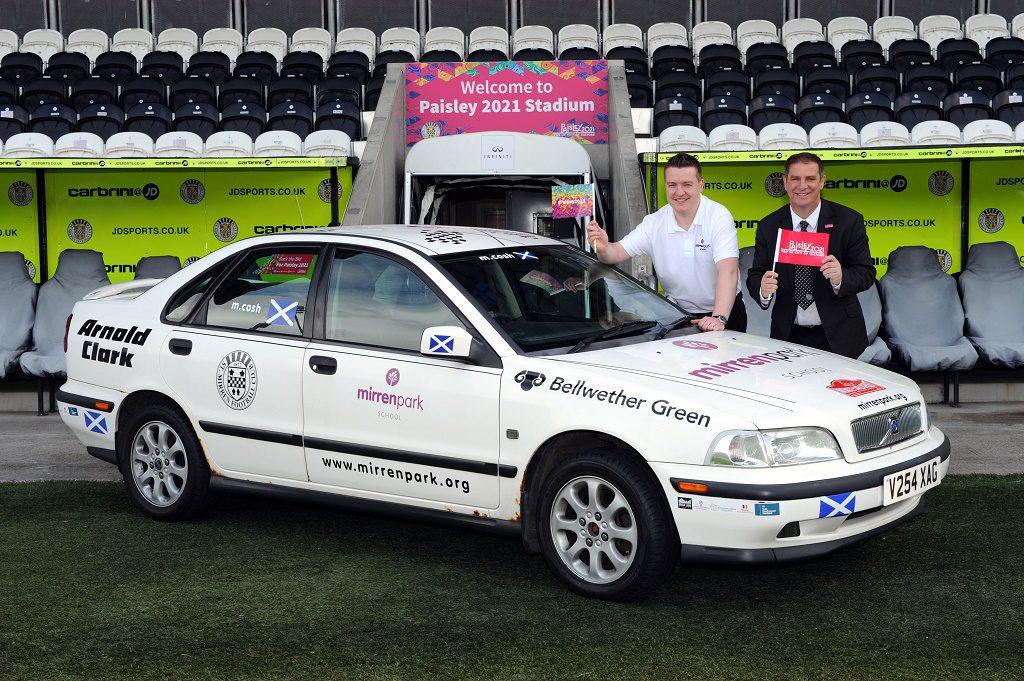 A Paisley man is driving from the town to Monte Carlo to help raise awareness of a local charity and spread the word about Paisley 2021, the town’s bid to become UK City of Culture. Martyn Cosh , Managing Director of Mirren Park School, is taking part in the ‘Monte Carlo or Bust’ rally later this week. Mirren Park School is a non-profit independent school based in Paisley which places a firm ethos on providing the area’s young people with the best opportunities for achieving their potential.

Earlier this year, the school received a special achievement award at the Aiming Higher ceremony in recognition of its contribution to Renfrewshire Council’s Invest in Renfrewshire program.

The ‘Monte Carlo or Bust’ challenge is to drive from Saint Quentin on France’s Normandy coast to Monte Carlo on the Cote d’Azur in just three days. The catch is that all cars taking part are allowed to have cost no more than £300, so Martyn will attempt to complete the journey in a 1999 V-reg Volvo.

On his way to Friday’s official start point in Saint Quentin, Martyn will visit Hull, UK City of Culture 2017, to catch the ferry to Zeebrugge in Belgium. From there, he’ll travel to Saint Quentin before driving the rally’s route, stopping in Dijon and Turin before arriving in Monte Carlo on Sunday.

Along the way, Martyn will be stopping for pictures with the official Paisley 2021 banner and handing out bumper stickers and mini-flags to other drivers and fans along the way. In total, Martyn will drive more than 2,500 miles during his round-trip.

Paisley has a proud connection with the Monte Carlo Classic Rally, with the town being the only UK start leg for the world famous event in each of the last three years. Earlier this year, more than 70 classic cars dating back as far as the 1920s gathered outside Paisley Abbey before being sent on their way by Renfrewshire’s Provost Anne Hall.

Martyn’s rally adventure also aims to raise support for Mirren Park’s new vocational skills centre which is due to open in Paisley at Scott’s Road in August 2016. The new centre will offer courses in construction skills, automotive mechanics, and DIY skills to any local young people interested in learning such skills.

It’s Martyn’s hope that his 17-year-old Volvo will survive the rally and become the first vehicle to be used in the workshop at the vocational skills centre.

Martyn said: “I am aiming to use the ‘Mirren Park to Monte Carlo’ trip to help raise awareness of our school and hopefully raise funds for our new charity Mirren Park Pathways. We have a number of plans in development such as our Vocational Skills Centre and the charity links with organisations such as Young Enterprise Scotland and St. Mirren Football Club.

“It will be a pleasure to be an unofficial ambassador of Paisley 2021 on my travels.”

The school is also launching a new charity, Mirren Park Pathways, which aims to secure small grants to deliver community-based projects. The charity is working closely with St Mirren Football Club and Young Enterprise Scotland on an initiative which will deliver courses in sport and personal development, and also landscape a new community garden adjacent to the Paisley 2021 Stadium.

Jean Cameron, Bid Director for Paisley 2021, said: “The work which Mirren Park School does in our local community is extremely important and it’s great to hear that Martyn and his team have plans to further strengthen what they do.

“The support and encouragement which they give to local young people is fantastic and in many ways is similar to what we aim to achieve with Paisley 2021. Celebrating and encouraging cultural development among our young people will allow them to fully express themselves and reach their potential.

“I’m pleased that Martyn has chosen to spread the word on his travels about the many exciting things we have going on in our town as part of Paisley 2021.”

Tony Fitzpatrick, Chief Executive of St Mirren Football Club, said: “It’s quite a journey Martyn is taking on and we’re pleased to be supporting him as he looks to raise awareness of the great work which Mirren Park School does in the local community.

“We’re looking forward to working in partnership with the school to develop further initiatives which bring benefits to the people of Paisley and Renfrewshire.”