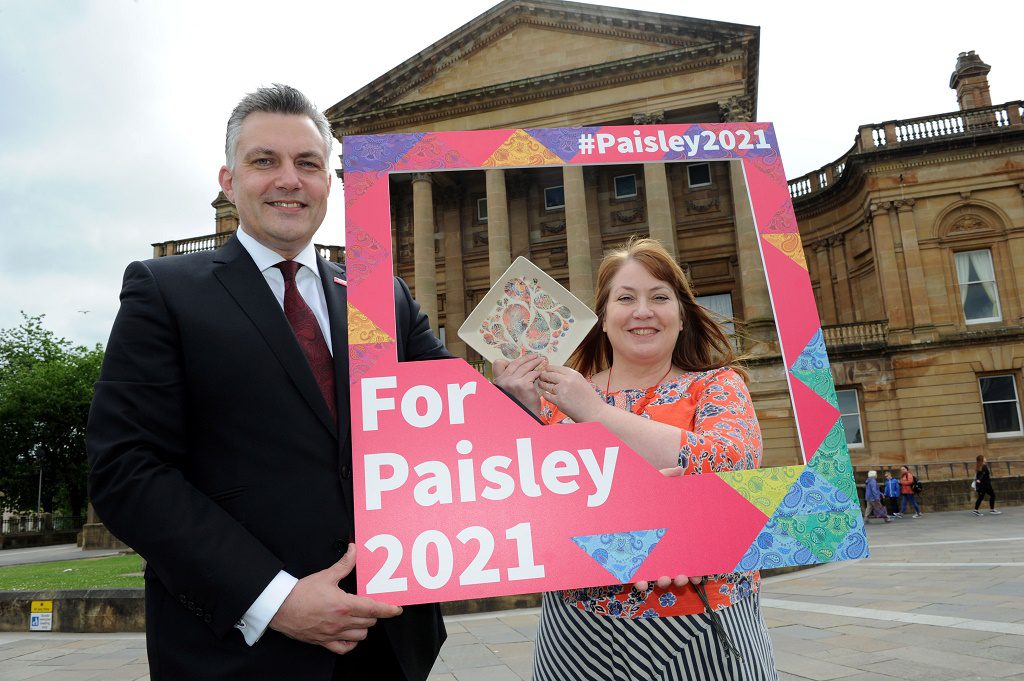 Some of the biggest stars in Scottish music are heading to Paisley next week – and will walk away with a prized memento specially created by a Renfrewshire artist. The Scottish Album of the Year Award ceremony – one of the most prestigious dates in the country’s musical calendar – will take place in Paisley Town Hall on Wednesday 29 June, as part of the push towards the town’s UK City of Culture 2021 bid.

And each of the ten shortlisted acts – including big names such as Franz Ferdinand and Sparks, CHVRCHES and Young Fathers – will receive a unique contemporary ceramic bell designed by Karen Hanvidge as part of the SAY Design Commssion.

Fittingly, given the musical connection, Karen can claim to be Straight Outta Compton – having been born and grown up in the LA city, before eventually settling in Renfrew. And it has been a long road towards her brush with stardom.

Having failed to get into Glasgow School of Art when she was 17, she refused to give up on her dream and the mum of two finally graduated with an honours degree in ceramics as a mature student in 2012, after 30 years working in the civil service.

Karen is now working with Renfrewshire Council’s InCube business incubator scheme which provides funding and support to creative businesses – with her work on sale as a guest artist at the InCube shop in Gilmour Street, Paisley.

She said: “The SAY Award commission is a fantastic thing to be involved in – I’m a big music fan so this is a great honour.

“I thought a ceramic bell was fitting as bells were traditionally used to bring people together, and music does that too.

“InCube has been very helpful – I just love being a part of a little community of artists It has given me a foot in the door to start getting my work out there.

“I had been painting all my life but wanted to work with clay so did night school and then a part-time degree in ceramics.

“I have now set up a studio in my garage at home, having worked in a shed at bottom of my garden for eight years before that – I think I spent half my life in that shed.”

Karen met up with Renfrewshire Council Leader Mark Macmillan outside the SAY Award ceremony venue where she showed off some of her Paisley-Pattern-inspired designs.

And Councillor Macmillan said: “It was great to meet Karen and find out more about this very special award commission – Paisley’s bid for UK City of Culture is all about helping to showcase the huge depth of local artistic talent Renfrewshire has.

“We are thrilled to be hosting the SAY Award here in Paisley for the first time it has ever left Glasgow in its five-year history.

“Being able to attract an event of this calibre shows we are on the map as a key destination on Scotland’s music calendar.

“Just this week we announced the bill for The Spree festival in October, which has hosted the most recent winners of the SAY Award in each of the past two years.”

Stewart Henderson, Director of the SAY Award, said: “It’s fantastic to have Karen produce our SAY Awards for this year, not only because it’s a first for us to have a designer working with ceramics but because Karen’s bell designs are another great example of how music can inform and inspire creativity across a range of artforms: the very reason The SAY Design Commission exists.”

The Scottish Album of the Year award, which began in 2012, is run by the Scottish Music Industry Association (SMIA). The most prestigious music prize in Scotland, the winner receives £20,000, equal in prize terms to the Mercury Music Prize. Previous SAY Award winners are Kathryn Joseph (2015), Young Fathers (2014), RM Hubbert (2013) and Bill Wells & Aidan Moffat (2012). Visit www.sayward.com for more info.