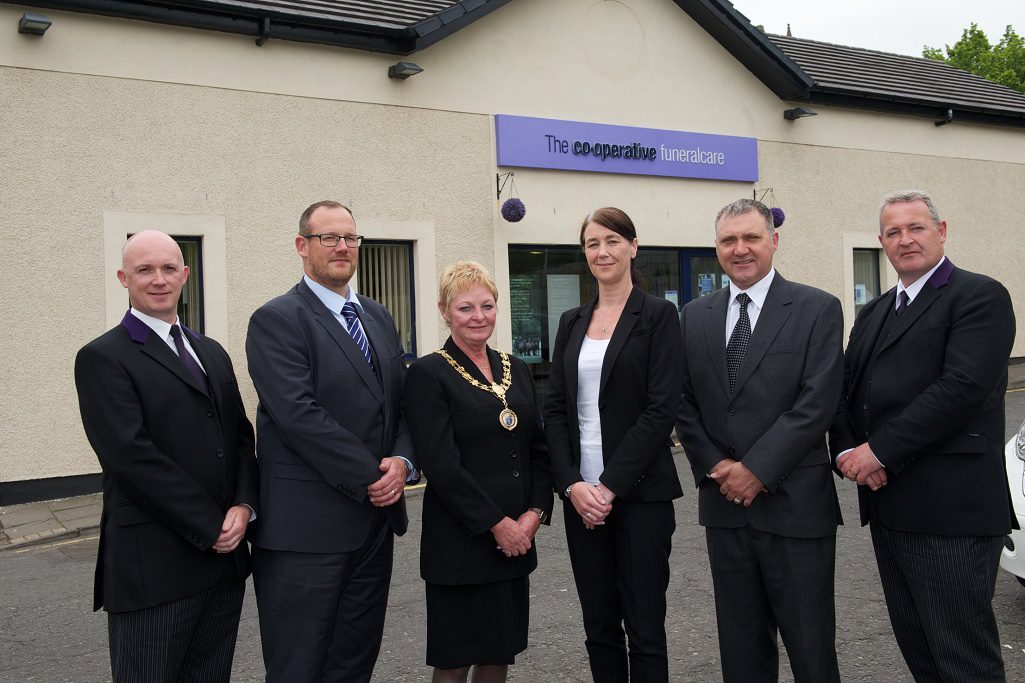 Renfrewshire’s Provost Anne Hall has shown her charitable side once again- working at a local funeral directors to raise money for her charity fundraising scheme. Provost Hall spent the day at Co-operative Funeralcare in Paisley- undertaking a number of daily duties to learn what it takes to be a part of their specialised team.

Beginning work at 8:30am, Provost Hall attended the staff briefing to find out what was in store for her and her colleagues for the day.

And they proved hard taskmasters, putting the Provost through her paces by helping to wash their extensive fleet of limousines and hearses- some of which can reach 19 feet long.

Provost Hall also attended a funeral on the day to see how the Co-op cares for families and ensures the occasion is handled with dignity and professionalism.

Other tasks included the furnishing of coffins, seeing how the funeral arrangers work closely with families to arrange a service and taking a full tour of the facilities.

Provost Hall said: “I was delighted to be asked to spend a day working with the Co-operative Funeralcare and I am grateful for their donation to my fundraising scheme.

“I learned the lengths they go to in order to ensure families receive a sensitive, professional and efficient service at such a difficult time.

“I am determined to raise as much as I possibly can during my time as Provost to ensure the maximum benefit to my four chosen charities- and I’m always on the lookout for new challenges.”

Gordon Powrie, Principal Funeral Director, said: “We, at Co-op Funeralcare Paisley, were delighted to welcome Provost Anne Hall to assist and take part in our daily general duties which are carried out by our Funeral Directors for the community.

“Paula Mitchell, Hub Manager, and the team in Paisley are fully committed to Provost Hall’s charity endeavours throughout the year and have sponsored Anne for this work experience day with the funds to go directly to a charity nominated by Anne herself.”

Provost Hall carries out a number of fundraising activities each year to raise funds for her chosen charities- and her latest challenge is a zip slide across Paisley’s East End Park.

She is seeking as many fellow thrill-seekers as possible to join her on Saturday 3 September to fly through the air and add to the £25,000 she has managed to raise so far.

The money raised will be shared equally among the four charities – Renfrewshire Carers’ Centre, RAMH (Recovery Across Mental Health) and two hospices- Accord and St Vincent’s- chosen by Provost Hall to feature in the special charity giving scheme during her term as Provost.