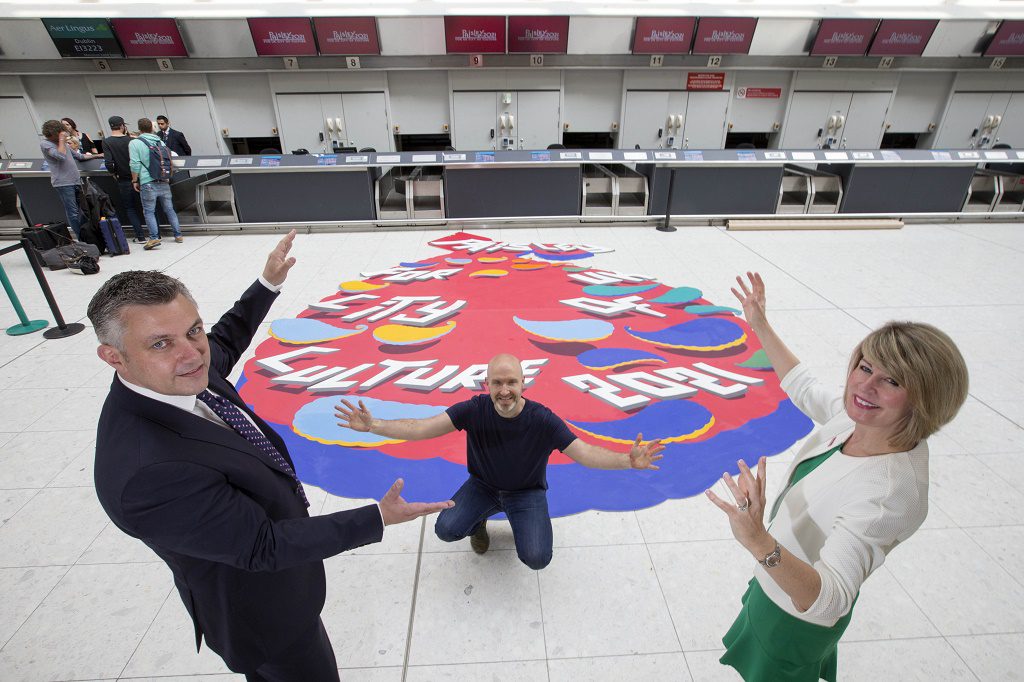 Paisley’s bid to be UK City of Culture 2021 has been cleared for take-off – after it was formally endorsed by bosses at Glasgow Airport. The Renfrewshire town is bidding for the title as part of a wider push to use heritage and culture to transform the area. And Glasgow Airport declared that good for business during an event today which included a Paisley-themed artwork on the floor of the check-in area to grab the attention of holiday-makers.

Renfrewshire Council Leader Mark Macmillan and Glasgow Airport managing director Amanda McMillan were both there along with artist Duncan Wilson, who produced the 3D-effect artwork known as a trompe l’oeil (trick of the eye).

Cllr Macmillan – who is chair of the Paisley 2021 Partnership Board, which governs the bid – said: “As one of the most significant private-sector employers in Renfrewshire, we are delighted the team at Glasgow Airport have decided to publicly throw their weight behind the bid.

“The airport is a direct link between Renfrewshire and the rest of the world, which makes them the perfect fit for the bid.

“Paisley once had connections throughout the globe via the textile industry in the form of the Paisley Pattern and the giant thread mills which followed – and the bid will involve us retelling that unique story to the world.

“The years leading up to 2021 will see two massive projects taking place through the Glasgow and Clyde Valley City Deal which will better connect the airport and Renfrewshire for businesses and travelers alike – the airport surface access project and the Glasgow Airport Investment Zone – and today’s announcement firms up that relationship even more.”

Amanda McMillan, chief executive of AGS Airports Ltd and managing director of Glasgow Airport, said: “Paisley has a vibrant and rich heritage and is known across the globe for its famous Paisley Pattern.

“Not only will UK City of Culture status shine a light on the town’s role in shaping the global textile industry, it has the potential to have a transformational effect on Paisley by harnessing a greater sense of civic pride and showcasing it as a destination in its own right.

“Paisley has the added advantage of having a thriving airport on its doorstep and I have no doubt whatsoever that securing the title of the UK City of Culture will play a major role in driving tourism.

“The bid has the full support of Glasgow Airport and Renfrewshire Council should be commended for its ambition.”

As well as the trompe l’oeil – featuring Paisley Pattern designs – bid team members were out and about with Paisley-2021-branded photo props taking pics of travellers.

Paisley-based artist Duncan Wilson added: “The artwork itself shows a large Paisley Pattern leaf with smaller leafs floating around it, and text in support of the bid in the 3D effect.

“It uses the colours of the Paisley 2021 bid and is very crisp and colourful – people aren’t going to be able to walk past it…you can’t miss it!”