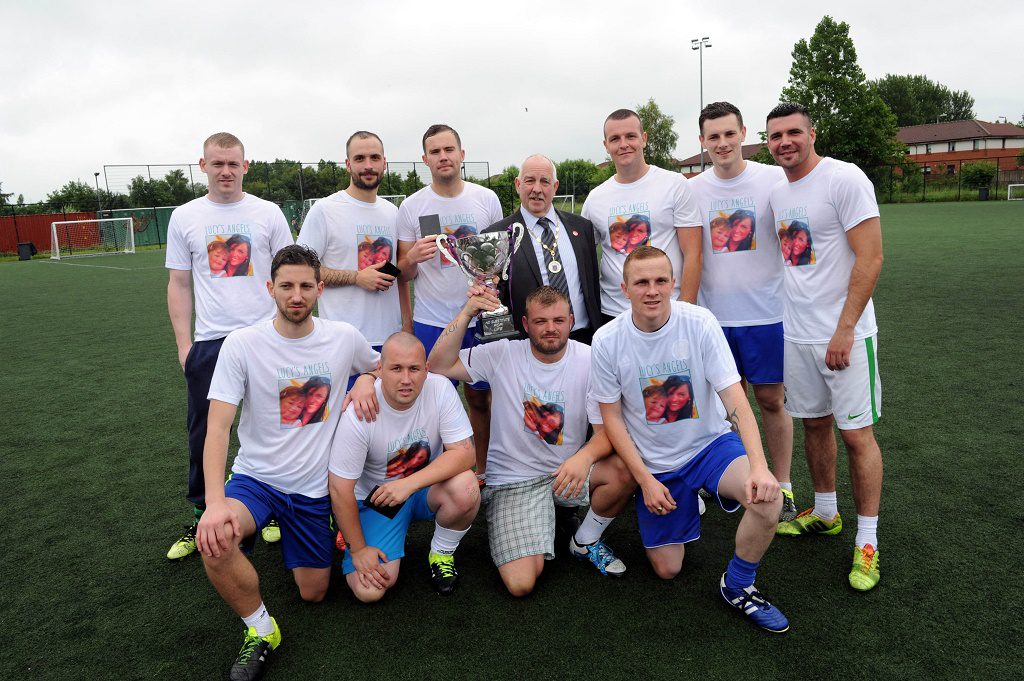 The local Ferguslie community turned out in their hundreds to support a memorial football tournament for those lost to suicide. 17 teams- including two walking football teams- took to the pitch to battle it out for the trophy which sees 7-a-side teams play in a group stage format- with the top teams in each group advancing to the knock out rounds.

And it was Lucy’s Angels who retained the trophy they have won for the last two years after a nail biting penalty shoot out victory against Adam’s United in the final.

Action shot of the penalty shootout in the final

The annual No Substitute for Life tournament was taking place for the fifth time and brings the community together to raise awareness of the issue among men and women of all ages.

The tournament, held at Ferguslie Park Sports Centre, is organised by community volunteers in partnership with Choose Life and Recovery Across Mental Health (RAMH).

The family friendly event also provided plenty for the kids to get involved with including face painting, glitter tattoos, arts and crafts and a magician- while the Street Stuff coaches were on hand to pass on tips to any budding young footballers who weren’t able to take part in the tournament.

Renfrewshire’s Depute Provost, John Caldwell, said: “I was delighted to see so many people turn out for this event yet again and congratulations to all the teams that took part.

“The tournament brings the community together through the medium of football to discuss what can still be a complex and taboo issue in today’s society.

“We need to challenge this perception and ensure that those who are in need of help are aware that it is available and that there are ways to move forward- meaning suicide never becomes an option.”

The event provides an opportunity for those who have lost a loved one to suicide to remember them and also meet others who have faced similar heartbreak.

Lisa Aitken, Choose Life Young Person’s Development Officer, said: “The Choose Life team appreciate the role that community activists like Paul Cardona, Anna Hampson and Kate Sharkey play in helping us to create Suicide Safer Communities in Renfrewshire- and to get across the message that ‘Suicide is everyone’s business’.

“This event takes us into the heart of the community and allows people to see the human face of services such as RAMH’S FIRSTCrisis, Breathing Space and Samaritans- and so hopefully reduces the barriers to people seeking help from them.”