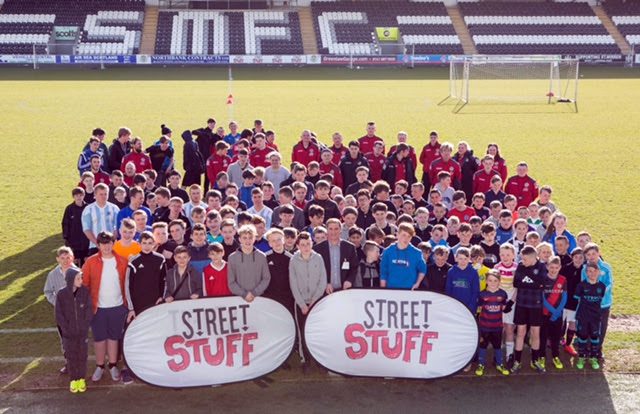 42 five-a-side teams from across Renfrewshire came together to take part in the annual Street Stuff Festival of Football at St Mirren FC’s Paisley 2021 Stadium on 3 May. This was the sixth annual Festival, organised by Street Stuff which provides a year-round programme of football, dance and other activities across Renfrewshire for young people aged 10-18.

At the end of the night the winners of the four age categories were:

The winning teams received trophies and all of the entrants in the younger age-groups received Paisley 2021 goodie bags and participation medals.

All of the participants were provided with healthy food and drinks during the evening.

As well as live football, players and spectators could also enjoy virtual football on FIFA Tournament on games consoles in the two Renfrewshire Youth Buses that attended the event. Attendees could also take part in dance activities inside the stadium complex.

‘It was great to see so many young people turn up to play in this event and support their friends.

‘The fact that this is our sixth annual festival shows how Street Stuff has become an important part of many young people’s lives in Renfrewshire.

‘As well as special events like this, Street Stuff is offering positive things for young people to do in all of our communities, all year round.

‘I would recommend young people in all of our communities find out what Street Stuff is doing in their area and get involved.’

‘We are delighted with the number of local teams that turned out for the tournament here at the Paisley 2021 Stadium.

‘t was great to see so many young people getting involved in the positive activities that Street Stuff is offering across Renfrewshire.’

More information about Street Stuff is available at www.renfrewshire.gov.uk/streetstuff