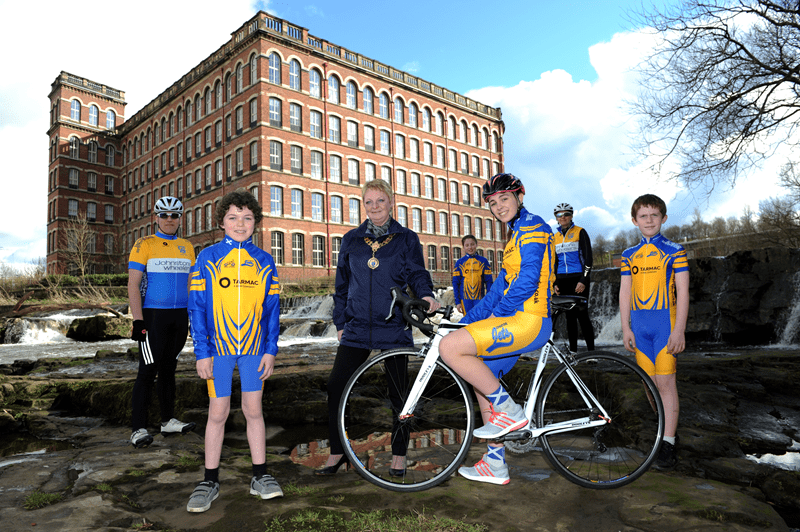 A successful Renfrewshire cycling club are set to fly the flag for Paisley’s bid for UK City of Culture 2021 across the whole country. The Johnstone Wheelers cycling club – and their youth section, the Johnstone Jets – will be proudly wearing the Paisley 2021 logo on their new kit.

The club – whose members compete at major competitions across Scotland and the UK – offered up the space as a way of showing their support for the bid.

The Johnstone Wheelers Cycling Club has been at the hub of cycling in Renfrewshire for almost a century and is this year celebrating its 90th anniversary, while the Johnstone Jets is one of the largest youth cycle clubs in Scotland.

Paisley’s bid for UK City of Culture 2021 is due to be lodged with the UK Government’s Department of Culture, Media and Sport in early 2017.

Renfrewshire’s Provost Anne Hall was on hand to meet some of the club members at a Paisley landmark – the Hamills on the Rivert Cart – to see the new kit.

She said: “Paisley’s bid for UK City of Culture 2021 is about the whole community coming together to tell the world what we are doing and what we as a town can offer.

“Whether we win or not, the process of bidding will bring benefits to the whole area – both in an economic sense and in terms of using the power of culture to make people’s lives better.

“So it’s great to see a club based in Johnstone and which trains in Linwood helping to promote Paisley’s bid – as it is for everybody in Renfrewshire too.”

Kenny Steele, of the Johnstone Wheelers, added: “We are delighted to announce our support for Paisley’s bid to become UK City of Culture 2021.

“With the club carrying such a positive profile, not only in Renfrewshire but across Scotland and the UK, this is an ideal opportunity to reciprocate the support we have received from the council and the people of Renfrewshire over the years.

“Our members represent the club all over the UK at a variety of events and, if we can help get the message out, then we’re proud to do so.”

The Johnstone Jets caters for youngsters aged between five and 17 and has an active club calendar with coached activities at Linwood every Saturday morning and road-race training on Thursday evenings.

For more information on Paisley’s bid for UK City of Culture 2021, see paisley2021.co.uk