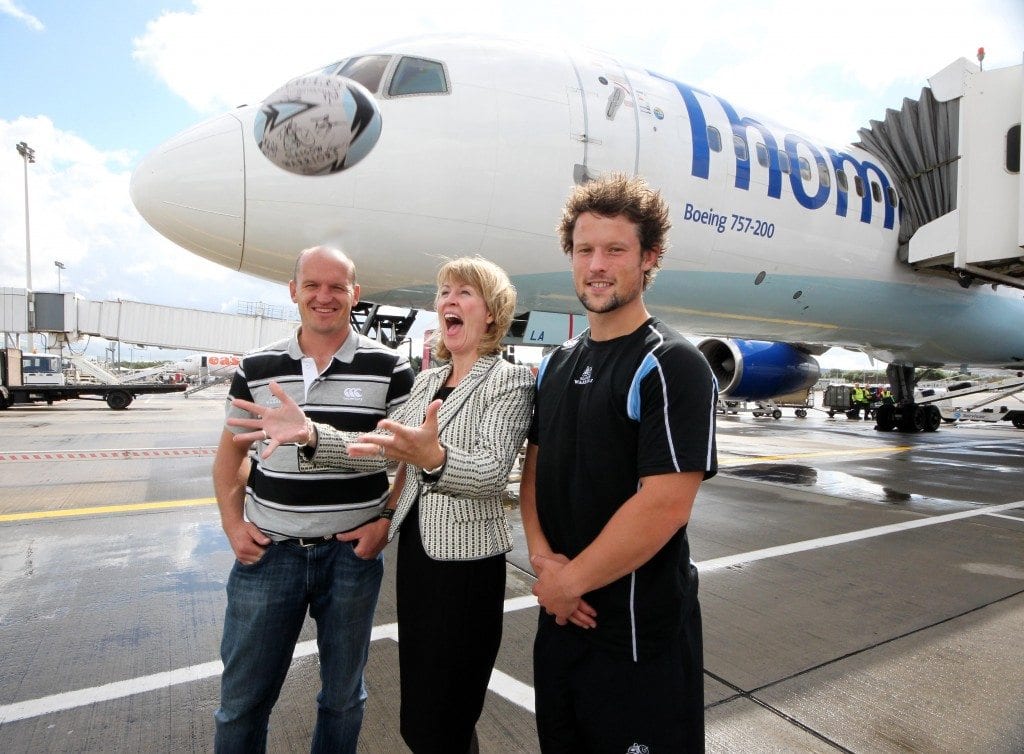 Glasgow Warriors scrum down with Glasgow Airport in new partnership

Glasgow Warriors will have the chance to attract an army of potential new supporters after it was today confirmed they are to join forces with Glasgow Airport in an innovative new partnership.

Some seven million passengers travel through the airport every year and the Warriors will now be able to tap into this mix of travelling Glaswegians and visitors as part of the partnership agreement.

Glasgow Airport will display good luck messages to the Warriors team throughout the terminal area when they fly out for matches in the RaboDirect PRO12 and Heineken Cup, and will also provide lounge access for key coach and commercial meetings.

To enhance the partnership, Warriors players plan to stage skills drills and signing sessions in the terminal, the first date intended to coincide with the airport’s Best of Scotland campaign which is currently showcasing the best of what Glasgow and Scotland have to offer. The partnership was announced as the Warriors prepare to take on Exeter Chiefs in tomorrow’s pre-season friendly at Millbrae, home of Ayr RFC.

“Nearly every weekend of the rugby season Glasgow Warriors and opposition teams and supporters travel through Glasgow Airport to destinations across Europe as part of our schedule in the RaboDirect Pro12 and Heineken Cup.  As we grow and achieve greater success in these competitions, more home and away supporters will be travelling through Glasgow Airport to watch the Warriors.

“With the move to our new home at Scotstoun Stadium, increased investment in our squad from Scottish Rugby, and record season ticket sales, we believe that we are on the verge of achieving something that has never been done before at Glasgow Warriors and give Glasgow and the west of Scotland a successful and thriving professional rugby team.

“But we know we can’t achieve this without support, and Glasgow Airport’s official partnership is a great example of a business seeing the opportunity to get behind what we are trying to achieve.”

Amanda McMillan, managing director of Glasgow Airport, said: “The Glasgow Warriors are regular travellers through the airport, as are their many competitors and legions of supporters, so it is a natural fit for the two of us to come together in this way. “With Gregor Townsend at the helm and the move to the fantastic Scotstoun Stadium complete, this season promises to be an exciting one for the Warriors and we are looking forward to working with Nathan Bombrys and his team as they strive to bring more success to Glasgow.”

Warriors head coach Gregor Townsend and back-row star Peter Horne were today on hand to get the partnership off to a flying start when they took to the tarmac at the airport.

Lighting Up Shakespeare
Scroll to top