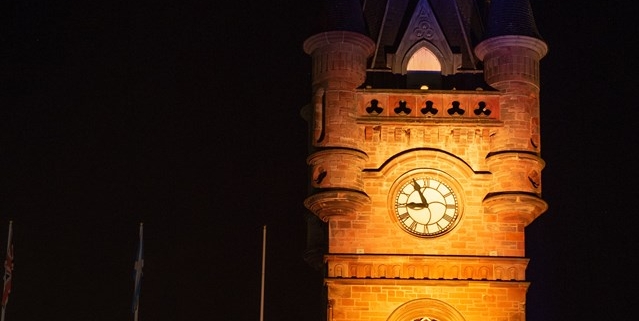 Renfrewshire Council is to light up landmarks across the region in support of communities in Ukraine.

Provost Lorraine Cameron asked for buildings to be lit in the Ukranian colours to show solidarity with the country as it faces hostility from Russia.

Councillor Cameron said: “We are all watching with horror as this conflict unfolds in Ukraine.  I cannot fail to be deeply concerned the intensifying hostilities are going to culminate in a further loss of life and will have a major psychological impact on its citizens, and young children in particular.  Watching the forced separation of children from their fathers, both knowing it may be the last time they see each other is distressing enough to watch from the comfort of my own home – I can barely even begin to imagine what it feels like to live that experience.

“I can only pray, and ask others to do the same, for peace, a speedy resolution and safe passage home for the Ukrainian people.

“Although it doesn’t seem much in light of the horror unfolding, I have asked that buildings across Renfrewshire are lit up to show our solidarity with Ukraine.  It is also my intention to ask for full council support to fly the Ukrainian flag at council HQ, and Renfrew and Johnstone Town Halls.”

Renfrew Town Hall, Bascule Bridge and Johnstone band stand will all be lit from Monday night to Friday this week. The plinths at Paisley Abbey will also be lit in the colours of the Ukranian flag prior to the start of each show for the UK About Us tour which runs in Paisley until March 6th

Glasgow News? Daily Updates part of our network
UNBOXED: Creativity in the UK