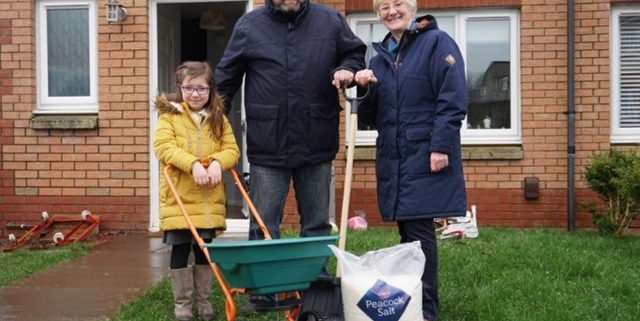 Local people in Renfrewshire are being supported to keep the paths outside their home and their neighbours’ homes ice-free this winter.

As part of the Council’s #RenReady Ready for Winter campaign, community members can borrow a grit spreader, grit and snow shovel from their local community caddy.

Twenty-five caddies are currently spread across Renfrewshire and local people are able to borrow them from the community volunteer who stores it if they wish to grit outside their homes or in the local area.

The equipment is in addition to more than 540 grit bins across Renfrewshire, as well as 20 larger community grit bins, which are available to help keep residential streets and paths safe.

The #RenReady campaign aims to keep people safe and prepared throughout the winter period and outlines the work carried out by the Council and the ways local people can prepare themselves over the winter period.

More than 4,000 tonnes of grit is available to be spread on Renfrewshire’s roads this winter, with more to be added if required, as the Council strives to ensure emergency, school and main routes remain free of snow and ice during winter weather.

Councillor Cathy McEwan, Convener of Renfrewshire Council’s Infrastructure, Land and Environment Policy Board, said: “We want to work with communities to ensure that we are prepared throughout the winter period for all weather conditions and our gritting teams are on standby 24/7 to keep Renfrewshire moving when the temperature, or snow, begins to fall.

“Our teams focus on the main priority routes so it’s not always feasible for them to reach every street in Renfrewshire, so we want to make available resources for people to keep their paths clear when we know that cold weather is coming.

“The equipment in the caddies can help keep you and your neighbours safe, as well as the grit bins placed at key locations across Renfrewshire, so please do your bit if you can and keep your street ice-free.”

The community caddies are part of the award-winning Team Up to Clean Up campaign and were established when council employee Gail Scoular pitched her idea to the Lens programme, the Council’s intrapreneurship programme which gives staff members the chance to be innovative and change the way we work.

She was awarded £12,000 and used this funding to create 14 community caddies which allow volunteers to tidy up their local area with a hedge trimmer, a leaf blower, shears and a variety of other items designed to help tidy local areas.

Glasgow News? Daily Updates part of our network
What’s on at The Bungalow

Festive Fun comes to Renfrew this Saturday
Scroll to top