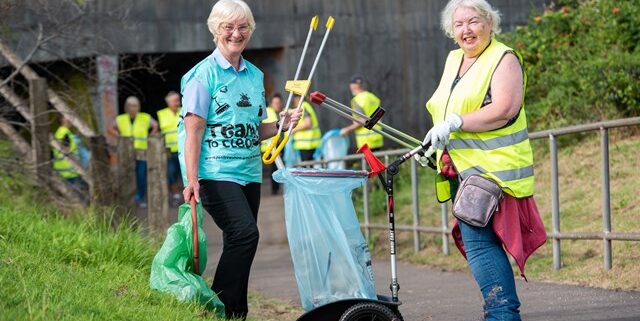 Renfrewshire’s award-winning Team Up to Clean Up campaign is working to tackle littering outside fast-food outlets and encouraging customers to take responsibility for their packaging once they leave the restaurant. 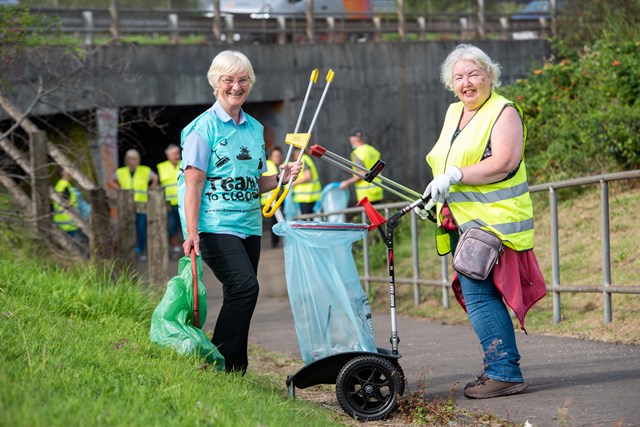 McDonalds staff joined local volunteers and Renfrewshire Council staff for a litter pick at the Phoenix Retail Park in Linwood – which also has a number of other fast-food restaurants – as they cleared discarded food packaging and aimed to change behaviours of customers.

Ensuring that litter is disposed of correctly and not discarded on the roadside is a key priority for volunteers as part of Spotless September.

The month-long litter picking event encourages local volunteers and businesses to make a difference in their neighbourhoods and help create a cleaner local environment.

Other businesses also signed up to take part during September include Glasgow Airport, Ikea and Morrisons Johnstone, with any others wishing to get involved invited to get in touch.

Councillor Cathy McEwan, Convener of Renfrewshire Council’s Infrastructure, Land and Environment Policy Board, said: “It’s so important that as part of this campaign we look at fast-food litter as we know that a lot of what we see is packaging from food bought on the go.

“It’s important that people use the bins provided at fast-food restaurants or shops, or keep it in the car until they get home as littering is not acceptable at any time.

“We’re working hard through our Team Up to Clean Up campaign to change attitudes and behaviours so please think before you throw something away and use a bin instead.”

Spotless September is part of the wider Team Up to Clean Up campaign which brings the Council and community together to tackle environmental issues in Renfrewshire.

Last year, despite the pandemic, an incredible 225 litter picks took place during Spotless September – more than seven a day – and a fantastic 1,072 bags of litter were collected by volunteers and removed by the Council’s StreetScene team.

Volunteers are supported with equipment and collection of the bags from litter picks, while the Council has invested in additional gully cleaning, road sweeping, litter picking as well as fly tipping, dog fouling and recycling campaigns.

For more information and to join thousands of other volunteers as part of the campaign, visit www.renfrewshire.gov.uk/SpotlessSeptember.

Working at Braehead is just the job as staff say ‘come and join us...
Scroll to top