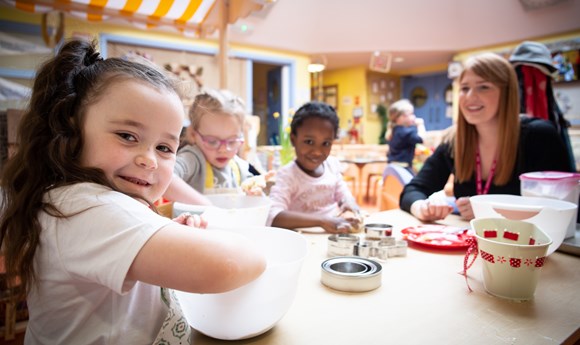 Most children in Renfrewshire are receiving 1140 hours of early learning and childcare, a new report has said.

More than 85 per cent of children eligible for nursery have been receiving the expanded hours since centres reopened in August following the coronavirus pandemic.

The roll-out of expanded hours to all children has been delayed due to the construction industry being shut during a nationally imposed lockdown, but now a new timeline for the remaining four new builds and 11 extension and refurbishment works has been drawn up.

Over the next two to ten months, the following building works will be completed.

Seven are on track to be completed by December 2020 – Gallowhill, Glenburn, Glendee, Kilbarchan, Ralston, St Margaret’s, and Williamsburgh.

Four more are expected to be ready by January 2021 – Houston, Inchinnan, Kirklandneuk, and Lochwinnoch.

Three nurseries have also received their official names following consultation with the public. The names are Dargavel, Kirklandneuk and Lochfield early learning and childcare centres.

The report will be considered by councillors at the next Education and Children’s Services Policy Board on Thursday 29 October.

Councillor Jim Paterson, who is convener of the education board, said: “It’s down to the hard work and dedication of early years staff that the vast majority of children eligible for 1140 early learning and childcare are receiving it. I’d like to thank all staff for their support throughout the years, and during the coronavirus pandemic when nurseries were closed, to ensuring we were able to accommodate more than 85 per cent of children.

“Lockdown clearly had an impact on our construction projects and it’s good to have a new timeline so that parents whose child doesn’t yet have 1140 hours now knows when they will start receiving these hours.”

Around 90 per cent of nursery staff have already been recruited, with the remaining 10 per cent to be recruited ahead of building work completion dates.

Four modern apprentices are also due to complete their qualification by the end of 2020.

A further seven more support workers and five more modern apprentices are due to qualify next year.

A further 35 posts will be advertised ahead of posts being required for the new building works timeline.

Councillor Paterson added: “It’s a good time to start your career in early years. Not only are you helping little minds to grow, you can also learn on the job and achieve qualifications”

Glasgow News? Daily Updates part of our network
The Best Area Of Wirral To Invest In