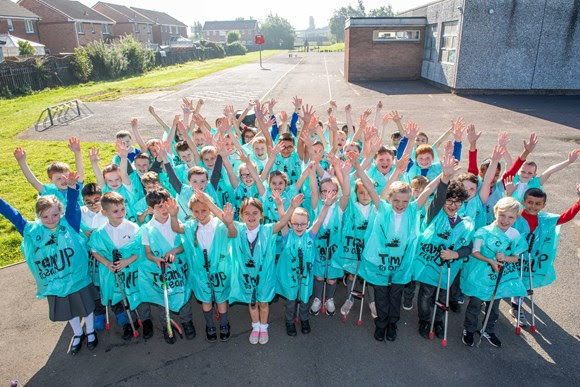 Enthusiastic pupils took the chance to clean up their community as part of Team Up to Clean Up’s Spotless September.

Pupils from Arkleston Primary and St Benedict’s High hit the streets around their schools on litter picks as they set out to make a difference to their local area.

Bibs, bags and litter pickers were provided to make it easy for the young volunteers and the council’s StreetScene team removed all the collected litter afterwards too.

It was all part of Spotless September, a month-long challenge to every community in Renfrewshire to host a litter pick and show their support for the Team Up to Clean Up campaign.

More than 35 litter picks have taken place so far by volunteers, community groups, schools and businesses which has made communities brighter, more inviting places to live, work and visit.

Councillor Cathy McEwan, Convener of Renfrewshire Council’s Infrastructure, Land and Environment Policy Board, said: “It’s fantastic to see the enthusiasm of our young pupils who recognise that littering is wrong and want to make a difference to where they go to school.

“It’s all our responsibility to ensure that we do whatever we can to keep our communities clean and our pupils are learning from a young age to put their litter in the bin as it can hurt the environment if they don’t.

“These litter picks are just two of the many that have taken place throughout September and I want to thank everyone who has taken part so far.

“Let’s keep this up until the end of Spotless September and beyond, the campaign doesn’t stop here!”

The Team Up to Clean Up campaign has benefitted from a five-year, £2.5million investment in Renfrewshire’s local environment which has seen an increased programme of road sweeping, drain clearing, litter picking and an enhanced Rapid Response Team.