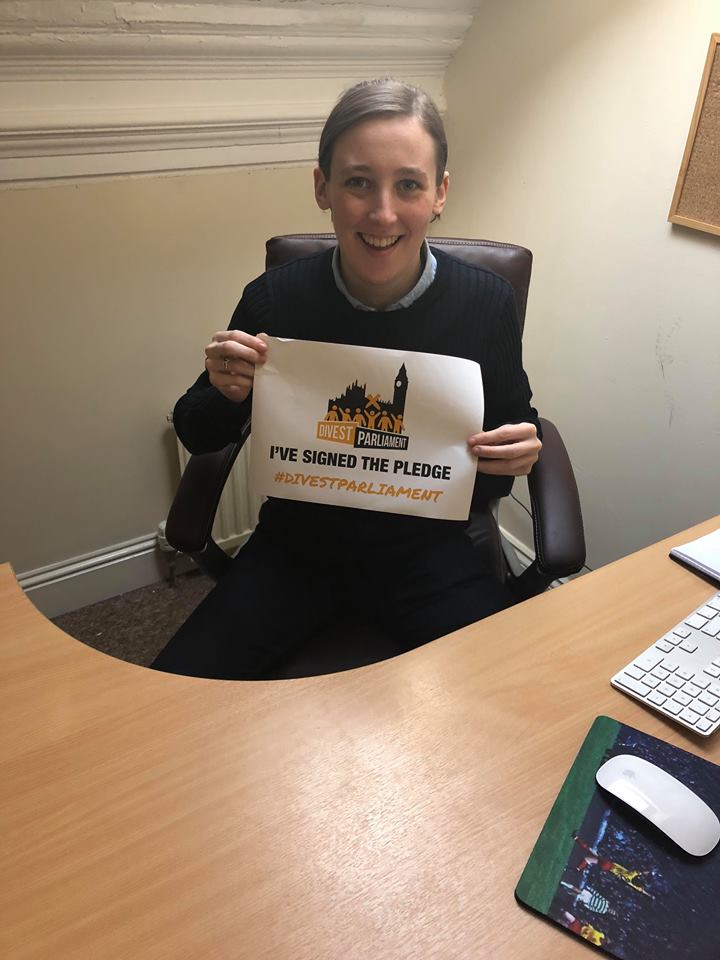 Paisley and Renfrewshire South MP Mhairi Black has become the latest Scottish MP to join a growing body of UK political leaders adding their support to the global movement for fossil fuel divestment. Mhairi Black, MP for Paisley and Renfrewshire South has joined over 160 cross-party politicians to sign the Divest Parliament pledge, calling for the MPs Pension Fund to move its £733 million of assets away from fossil fuels owing to concerns about climate change.

Mhairi Black MP said: Scotland is leading the way in formalizing a low carbon economy. We have already seen the Scottish Government reach ambitious climate change goals and renewable energy targets, it is important that we continue down this progressive path as climate change is one of the biggest threats to the planet as we know it.

Black’s pledge comes as constituents across the UK are urging their local MPs to show they care about climate change by calling on their pension fund to align its investments with the UK’s climate change commitments.

“I applaud Mhairi Black’s stand on calling for her pension to be moved away from fossil fuel investments. As a supporter of fair trade in Renfrewshire, I also believe in preserving the future of our planet’s environment by moving away from fossil fuels to more sustainable methods of energy production.”

The last Annual Report for UK Parliament MPs Pension Fund revealed 5 out of the top 20 investments were in fossil fuel companies such as BP, Shell and Total. The investments are a stark contrast to the UK government’s commitment under the Paris Agreement to keep global warming well below 2oC.

Campaigners and climate scientists argue that keeping this commitment would mean leaving most known fossil fuel reserves in the ground. If fossil fuel companies cannot use their reserves, they become stranded assets, so there is also major financial risk for continued investment in fossil fuel companies, considering international efforts to tackle climate change.

The Scottish Government is demonstrating its commitment to tackling climate change with its recent ban on fracking in Scotland and its plans for a 90% reduction in emissions by 2050 in its landmark Climate Change Bill.

Supported by the ‘Divest Parliament’ campaign, UK citizens have been writing to and organising meetings with their MPs to raise awareness of the issue.