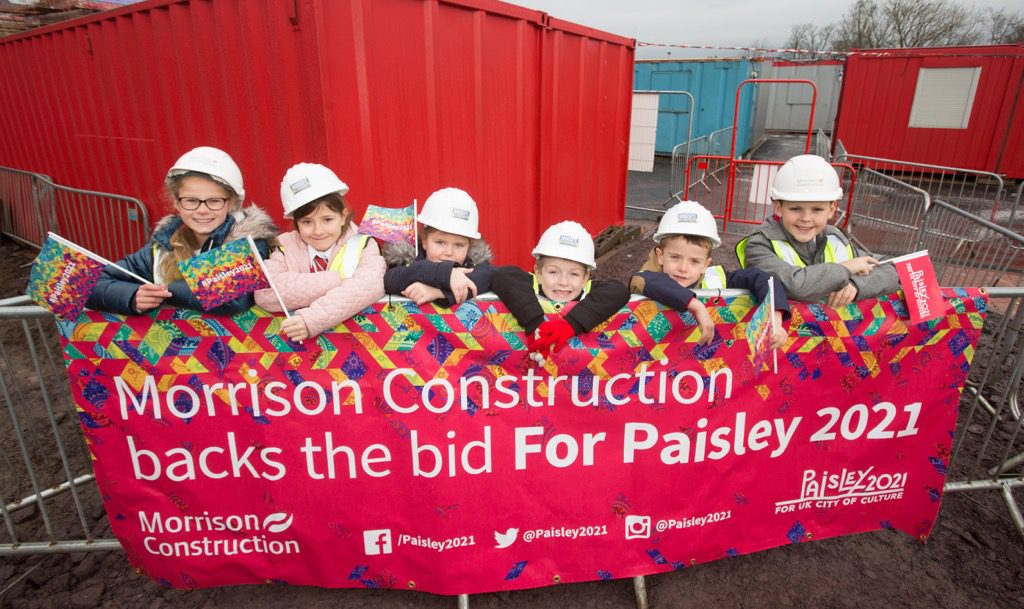 One of Scotland’s leading construction firms has declared its support for Paisley’s 2021 UK City of Culture bid. Morrison Construction will make a five-figure contribution should Paisley take the title.

More than 200 companies have shown their support, while 13 private sector organisations have committed over quarter of a million pounds if the bid is successful. Paisley has been short listed for UK City of Culture 2021, alongside Coventry, Stoke-on-Trent, Sunderland and Swansea.  A decision will be announced in December by the Department for Digital, Culture, Media and Sport which organises the competition.

Morrison Construction is part of the UK-wide Galliford Try Group, and has delivered more than £1 billion public and private sector projects over the last five years, including many schools and hospitals across Scotland. The company has also been involved in the construction of the iconic Falkirk Wheel and the Queensferry Crossing, which opened to traffic in August this year.

Renfrewshire Chamber of Commerce Chief Executive and member of the Paisley 2021 Executive Bid Team, Bob Grant welcomed the company’s support and said: “It’s great to have a company like Morrison Construction on board as a sponsor of the Paisley UK City of Culture 2021 title bid. We are very near to a decision and the scale of the support from the business community shows how widely the bid has been embraced.

“Firms large and small and many with international links have thrown their weight behind it because they recognise the economic and cultural benefits it brings.”

Morrison has strong links with Renfrewshire and its Community Benefits team has delivered careers presentations and health and safety talks at local schools including St Benedict’s High School in Linwood and Park Mains High in Erskine.

Over the past year in the west of Scotland, Morrison Construction’s Community Benefits activities have included more than 5,000 engagements with pupils and students, and 572 work experience days set up.

The company’s projects across the region have seen the creation of 107 jobs and 92 new apprenticeships through the supply chain.

Morrison Construction’s Regional Managing Director, Eddie Robertson, said: “We are excited about the new opportunities which would be sparked by a Paisley success in the UK City of Culture 2021.

“It would create direct and indirect opportunities for companies like ours to provide the services and infrastructure, with all the following spin-off benefits for communities, education and employment. “We are delighted to be a supporter of the bid.’’

Other firms to have backed the bid include drinks giants Diageo and Chivas Brothers.

Renfrewshire Chamber of Commerce and Paisley First, which represent 900 businesses between them have also backed the bid, along with local companies the Gordon Leslie Group, Clark Contracts, MacAsphalt and Scottish Leather Group, the largest manufacturer of leather in the United Kingdom.

Trucking company WH Malcom branded two trailers with the Paisley 2021 logo, which have travelled the length and breadth of the UK.