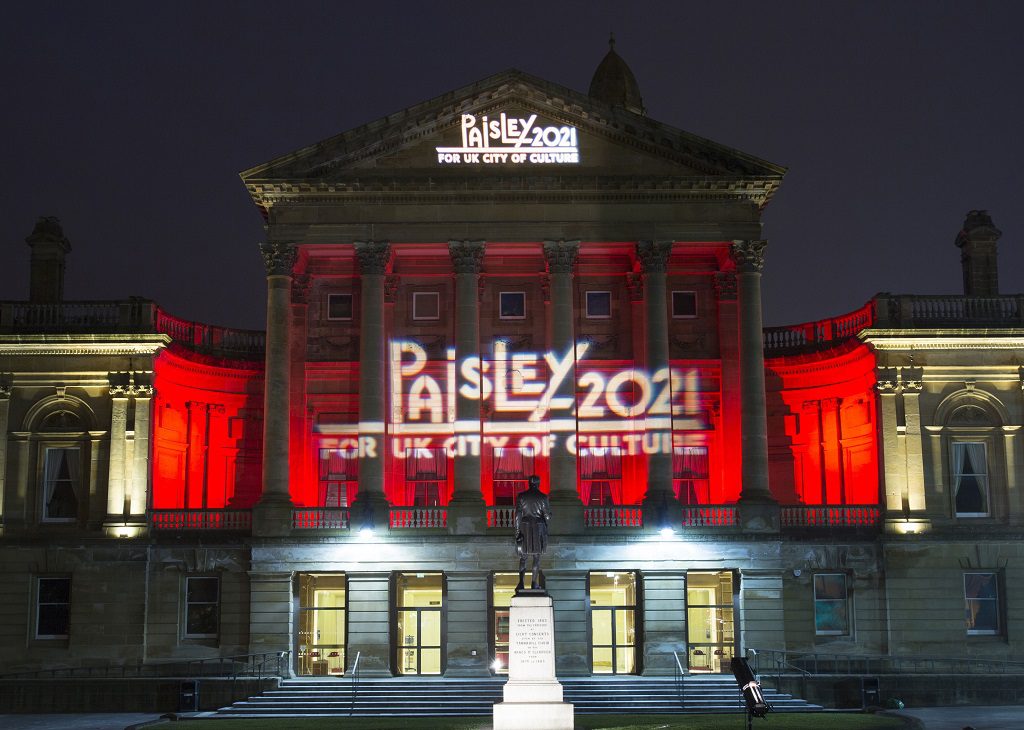 Paisley’s bid to be UK City of Culture 2021 has been boosted by a massive £45.7m town centre investment package to help the town host the title, given the green light today by councillors.

A meeting of Renfrewshire Council agreed to set aside funds for major infrastructure projects which support the wider push to transform Paisley’s future using the power of its internationally-significant heritage and cultural story. Paisley Town Hall lit up in support of the bid

The news comes as the town – the only Scottish place to make the final UK City of Culture 2021 shortlist – prepares to submit its bid to the UK Government’s Department of Digital, Culture, Media and Sport tomorrow.

Today’s investment will support the long-term future of some of the town’s historic venues and the wider regeneration of Paisley – while also ensuring the town is ready to host the 2021 title should it be announced as the winner. It includes:

– £22m for a major modernisation of Paisley Town Hall. The 135-year-old venue will get a replacement electrical system as well as an extensive programme of improvements covering an improved main hall, stage and lighting, plus a new function suite, kitchen and bar;

– a £7.7million redevelopment at St James playing field including an area for large outdoor events, upgraded grass pitches, new pavilion and café; and an upgrade to Ferguslie Park Sports Centre;

– £3.5m set aside to turn the disused Galbraiths warehouse in Back Sneddon Street into a venue capable of hosting large-scale art exhibitions such as the Turner Prize, which typically goes to the UK City of Culture host. This money will only be spent should Paisley win the 2021 title;

– £2.5m for a wide-ranging revamp of Paisley Arts Centre including improved a replacement electrical system and toilets, dressing rooms, seats and staging, as well as access improvements.

The money committed today is over and above funding previously set aside for three projects already under way – the new museum store set to open in a basement of a high street unit later this year, the new Paisley library to be built further up the same street, and a £42m revamp of Paisley Museum, for which it was announced yesterday £4.9m of National Lottery money has been earmarked.

Paisley is joined on the final UK City of Culture 2021 shortlist by Coventry, Stoke, Sunderland, and Swansea, with a decision due in December. There has never been a Scottish winner. The bid is due to be sent off tomorrow with a mass public show of support at Paisley Cross from 10.30am.

Today’s investment comes as a local group – the Paisley Community Trust – prepare to unveil their own plans for a cinema and theatre complex in the town centre.

Renfrewshire Council leader Iain Nicolson said: “The package of measures unveiled today shows the scale of our ambition for Paisley and Renfrewshire over the next decade.

“We are making sure Paisley is equipped to host the UK City of Culture title while also supporting the wider vision to use our unique and internationally-significant heritage and cultural story to transform the area’s future.

“Paisley town centre needs a boost – and the way we can deliver that is by using what sets us apart to bring people back into the town.

“Paisley has massive potential as a visitor destination and is already making a name for itself as an event venue. Improving the physical and travel infrastructure of the town centre makes it easier for people to get here, and a more attractive place to spend time.

“The work already under way on the new museum store and library – with plans to transform the museum also in the pipeline – are the first steps towards turning our high street into a culture street, bringing new life and footfall which will allow traders to thrive.

“At the same time, the scale of the investment in the town hall and arts centre will make these two outstanding listed buildings fit for the 21st century as venues capable of hosting the type of international-class programming which the UK City of Culture year will bring.

“And to have a local group preparing to unveil their own set of plans for an arts venue in the town centre just shows the extent to which the wider community and private sector see the potential of what culture can do for Paisley.

“There is nothing which could transform Paisley more than winning the UK City of Culture 2021 title – the journey we want to go on will move to a totally different level, with a year of major events and world-class programming which everybody will be invited to enjoy and benefit from.

“We need this title and Paisley Buddies have shown they want it to happen – this investment will mean we will be ready and able to host it, and I commend councillors for the long-term vision they have shown today.”

Current UK City of Culture hosts Hull have seen £1 billion of investment since winning the title in 2013, with the city attracting 1.4m visitors in just the first three months of its year in the spotlight.

Glasgow News? Daily Updates part of our network
Top Tips to Get Your Garden Ready for Autumn