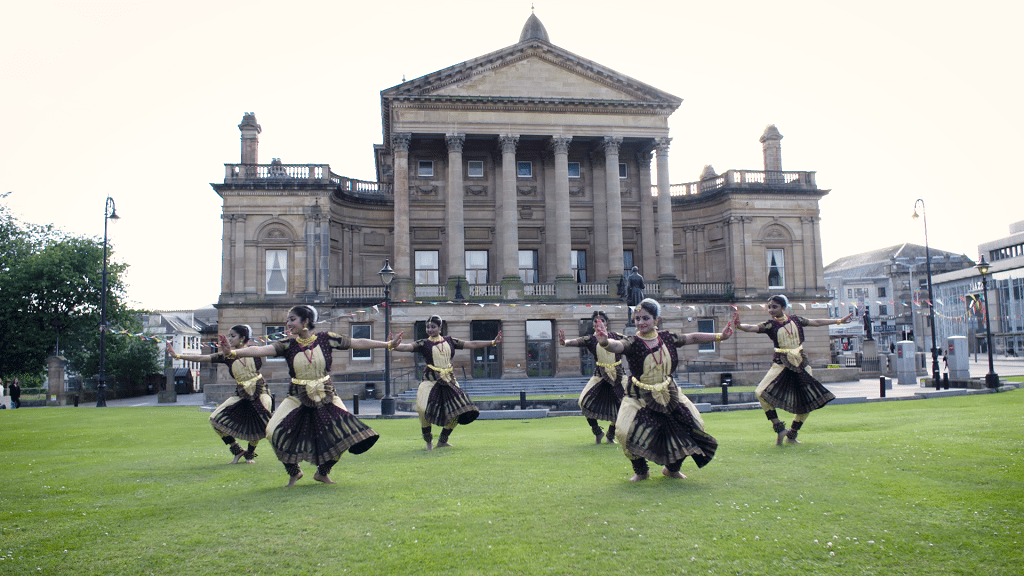 Paisley’s bid to be UK City of Culture 2021 has been boosted by a beautifully-made video showing Indian dancers performing against the backdrop of the town’s iconic landmarks.

stills from the video

The video stars dancers from Abhinaya Glasgow Dance Academy and was funded by a grant from the Renfrewshire, Culture, Heritage and Events Fund, created as part of the Paisley 2021 bid.

It has been released to coincide with the 70th anniversary of Indian independence (TUESDAY) which will see events taking place across the UK, India and beyond.

The film can be seen now via paisley2021.co.uk and on the 2021 social media channels.

The four-minute-long film – called The Longing – was shot earlier this summer and uses classical Indian dance to tell the story of ‘a beautiful girl’ Rada, who is waiting for her hero Kanan to return.

It is set in the grounds of Paisley’s 850-year-old Abbey, while dancers in traditional costume can be seen performing in front of local architectural treasures such as Paisley Town Hall, Anchor Mills and the cobbled streets of Oakshaw, while the Paisley Pattern also features.

Paisley is bidding to be UK City of Culture 2021 as part of a wider push to transform the town’s future using the power of its internationally-significant heritage and cultural story.

Earlier this month, the town was confirmed by the UK Government’s Department for Digital, Culture, Media and Sport as the only Scottish place on the final shortlist – which also features Coventry, Stoke, Sunderland and Swansea.

And Paisley 2021 bid director Jean Cameron said: “We are thrilled to support this wonderful project through Renfrewshire’s Culture, Heritage and Events Fund, created to help bring new talent to the area and boost our local creative scene.

“The diversity it shows will be central to our 2021 cultural programme, while the film also highlights the massive contribution the Indian diaspora make to the UK arts scene.

“Everything about the video is stunning – the choreography, direction, cinematography and costumes, and it shows Paisley, the Paisley Pattern, and our wonderful collection of historic buildings at its best.

“Of course Paisley and India are already linked – with our weavers having mastered the production of the original teardrop-motif Kashmiri shawls in the 19th century and created a fashion symbol which spread the Paisley name around the world.

“We are delighted to be celebrating those links for the 21st century through our digital channels, and to be making our own contribution to the 70th anniversary of Indian independence celebrations.”

The dancing was choreographed by Esther Sunija, artistic director of Abhinaya Dance Academy, who teaches Indian dance classes in the town.

Esther said: “With help from Paisley 2021, we wanted to showcase the important buildings of Paisley to people around the world.

“We used the Paisley Pattern onto the sarees and rangoli and also showed the beautiful venues of Paisley, especially the mill and riverside, to help us communicate the story behind the scene.

“The video also raises awareness of the South Asian classical dance of Bharatanatyam, which is part of one of the eight ancient dance forms in India.

“We found Paisley’s heritage buildings go well with Bharatanatyam and are delighted to highlight the diverse cultural influence of Paisley.”
Abhinaya’s classes are open to all will resume after the summer break starting next Monday, in the town’s Wynd Centre, from 6 until 8pm.

They feature two disciplines – Bharatanatyam – one of the most popular classical Indian dance forms, noted for its fixed upper torso, spectacular footwork and sophisticated vocabulary of hand and facial gestures, and Dancercise, which blends aerobics and dance moves with upbeat Bollywood music.

For more information on the bid, visit www.paisley2021.co.uk and for the classes, see www.abhinayaglasgow.org/paisley-2021

Glasgow News? Daily Updates part of our network
Johnstone hots up as Fire Engine Rally returns to the town