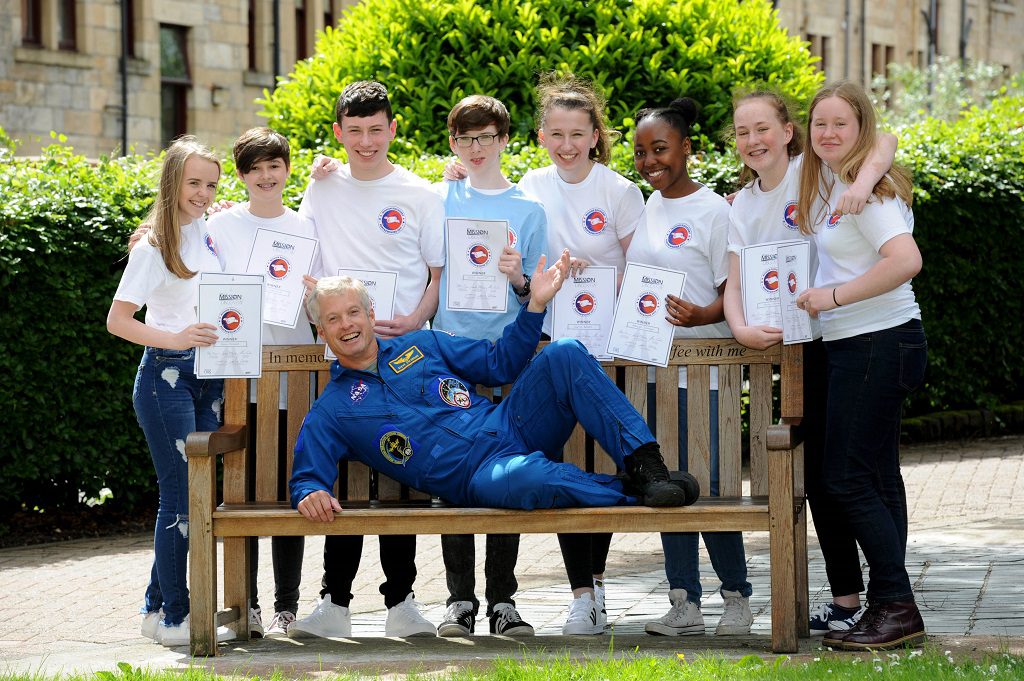 A team of secondary school pupils are over the moon after hearing their science experiment will be launched into outer space and carried out by astronauts on the International Space Station.

The sky-high feat is their reward for taking part in Mission Discovery Renfrewshire – a week-long space school, hosted by Renfrewshire Council in partnership with University of the West of Scotland (UWS) and run by the International Space School Education Trust (ISSET).

The teams were made up for 200 school pupils from Renfrewshire, Inverclyde and East Renfrewshire, mentored by a UWS student alongside a panel of space experts, including former NASA astronaut Steve Swanson, to devise a science experiment that could be conducted in outer space.

The winning team’s successful experiment – hailed as the first of its kind – will test if aloe vera can slow down or prevent the spread of candida fungus on the skin of astronauts in space.

Molly O’Brien, pupil at Gryffe High School and one of the winning team, said: “It was an amazing experience. We are so happy to have won.”

Steve Swanson said: “It was fantastic. I was really impressed with the young people and the quality of their presentations. They did a brilliant job.”

Mission Discovery gives young people the chance to learn from NASA’s approach to developing leadership, team building and personal development as well as fostering interest in science and research.

Renfrewshire Council’s Education Convener, Councillor Jim Paterson, said: “To be chosen as the winning team in this fantastic space school is a magnificent achievement and my congratulations go to all the pupils behind this superb idea.

“Mission Discovery Renfrewshire is an amazing programme for all 200 pupils from Renfrewshire, Inverclyde and East Renfrewshire who take part. Meeting an astronaut and a whole panel of space experts is a brilliant opportunity and is sure to inspire young people to pursue their goals and reach their full potential.

“This programme is a testament to how working with partners can benefit young people and I would like to thank everyone involved.”

Professor Ehsan Mesbahi, UWS Vice Principal & Pro Vice-Chancellor, said: “I would like to congratulate not just the winning team, but all of the pupils who participated in this excellent, inspiring week-long space school at our Paisley Campus.

“At UWS we are committed to developing and encouraging the best talent in science, engineering, technology and mathematics and we are delighted to be a key partner of Mission Discovery Renfrewshire.”

Start-up businesses: getting off on the right foot
Scroll to top