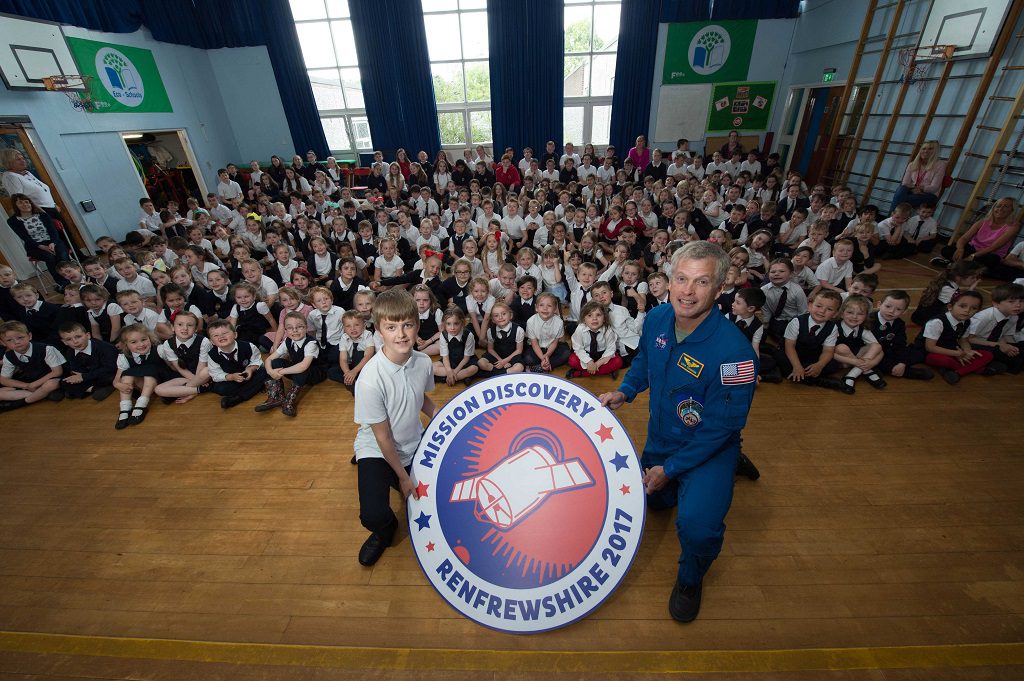 Kane Flynn, in Primary 7 at Rashielea Primary School, Erskine, received the special visit to celebrate his design being chosen for this year’s Mission Discovery Renfrewshire badge.

Astronaut Steve Swanson visited Kane and his classmates at the start of the week-long educational programme Mission Discovery Renfrewshire, an event held in Paisley at University of the West of Scotland, hosted by Renfrewshire Council and run by the International Space School Educational Trust (ISSET).

The programme sees 200 pupils from Renfrewshire, Inverclyde and East Renfrewshire working together in teams to design a science experiment that can be tested in space, with the winning experiment being launched into space to be tested on the International Space Station.

Kane and his classmates got the chance to chat with astronaut Steve Swanson and hear of his adventures in space.

Rashielea Primary Depute Headteacher, Mhairi Peden, said: “Kane is a keen artist and was inspired by the previous designs and particularly interested in the shape of the International Space Station.  Kane hopes to study palaeontology when he is older and has a keen interest in anything scientific.

“Kane was delighted to meet Steve and found what he had to say about his time in space fascinating.”

Mission Discovery Renfrewshire gives young people the chance to learn from NASA’s approach to developing leadership, team building and personal development as well as fostering interest in science and research.

Glasgow News? Daily Updates part of our network
Be part of a new show – Seraphina calls for a chorus