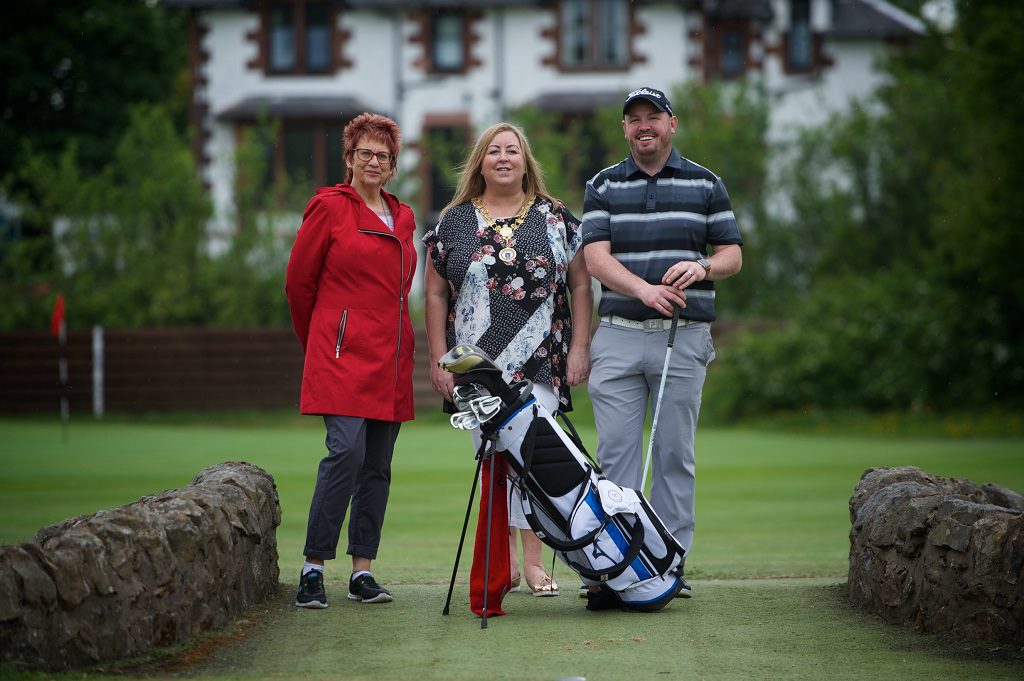 Fundraisers are teed up to take part in a charity golf tournament this weekend which aims to raise money towards suicide prevention.

Rosemary Mullan, Renfrewshire’s Provost Lorraine Cameron and Stephen Torrance on the bridge at the 18th hole

After the success of previous years of the event- which has seen more than £5000 raised for Choose Life and the Survivors of Bereavement by Suicide (SOBS) group- Elderslie residents Stephen Torrance and Andy Payne have once again come together to honour the memory of Stephen’s brother Vincent.

The Vinny Torrance Invitational will see 100 players- playing in teams of four- take part in a Texas Scramble competition- with prizes for 1st and 2nd as well as six feature holes.

Elderslie Golf Club will host the event and have helped keep costs down by subsiding green fees for the tournament which has helped ensure a capacity attendance.

Following the golf, there will be a raffle and an auction to raise funds for the charity as well as a social evening in the clubhouse.

Kindly donated by Under Armour, the auction has six hospitality tickets to the Wales v Scotland match at the 2018 6 Nations Championships to be won.

Worth an incredible £5000, the current highest bid sits at £1500 and bids are encouraged to ensure the most money is raised as possible for the SOBS group.

Renfrewshire’s Provost Lorraine Cameron said: “This is a terrific event as it allows the issue of suicide and depression to be raised and encourages people to discuss it with their peers.

“The SOBS group provides a great outlet for those who have been bereaved and the money raised will allow the SOBS group to continue to provide help to those who need it in Renfrewshire.

“Stephen should be proud of arranging such a fantastic event which is a fitting tribute to his brother’s memory.”

In 2009, Vinny took his own life at the age of 27 after suffering from depression.

Stephen added: “”Vincent battled with depression for a number of years but hid it from friends and family.

“Like so many young men, he felt if he spoke about his illnes then this was him showing a ‘weakness’.

“We want to raise awareness that depression and suicidal thoughts are not a weakness and that there is help out there.”

The SOBS support group meets on the last Wednesday of every month at The Wynd Centre, Paisley from 7pm-8:30pm.

Rosemary Mullan, Choose Life Co-ordinator, said: “Without fundraisers and volunteers such as Stephen, the SOBS group would not be able to make the connections we do with those who may be suffering from suicidal thoughts.

“An event such as this is fantastic as it brings forward the issue of mental health to a demographic which can be most at risk and can hopefully allow anyone to seek help who may need it.”

For more information on suicide prevention, call 0141 849 2200, or email  rosemary.mullan@renfrewshire.gov.uk.