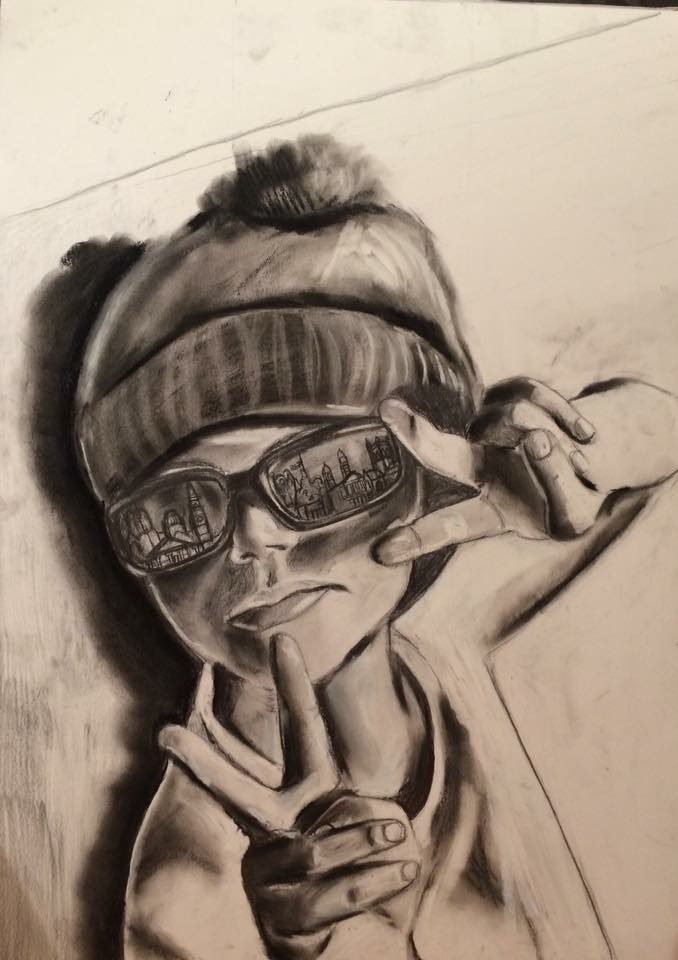 Renowned Paisley artist, Caroline Gormley, is teaming up with Paisley First and another international artist, Alexander Guy, on the second of the Paisley First Wall Series to produce a giant mural on a gable end, again in the heart of the town centre.

Caroline and Alexander are going to commence art work on March 20th, 2017 on the gable wall next to Allan’s Snack Bar, a Paisley fish and chip shop haunt and Cardosi’s, a popular Italian restaurant.

Caroline initially proposed a sketch of the lovely “Gracie” but this idea developed when she started thinking further about muralism.

“The modern tradition of muralism uses social and political themes, so community involvement is foremost for this mural. I decided early on that this project should be for the public.”

The artist’s sketch of “Gracie” shows the subject wearing a pair of oversized sunglasses with the reflection of Paisley’s wonderful architecture drawn in the lenses.

“The idea for this image was to show that our children are the future of Paisley. The reflection of the buildings are a representation of Paisleys heritage and the importance of how it’s the younger generations that uphold the future of that heritage.”

“This project is part of a wider initiative to enhance the attractiveness of the town centre. Protecting our heritage and the future of our iconic buildings is an important part of this process and the mural encourages young people to think about that.”

Paisley First, in collaboration with artist Caroline Gormley and Alexander Guy, would now like to encourage Paisley’s youth community to come forward. Anyone under 18 years of age who wants to get involved should send in a photo of themselves in the same pose as Gracie.

One winner is going to be chosen, commemorated on the gable wall and the art work will be entitled, “Buddie”.

When we quizzed the artist on what she was looking for in a winner, she responded:

“I’ll be looking for a photo that encapsulates the inquisitive nature of youth. An attitude that shows the child wants to know and learn more…. I’d like a natural curiosity to be depicted in the final outcome.”

To enter the competition, this is all you have to do: