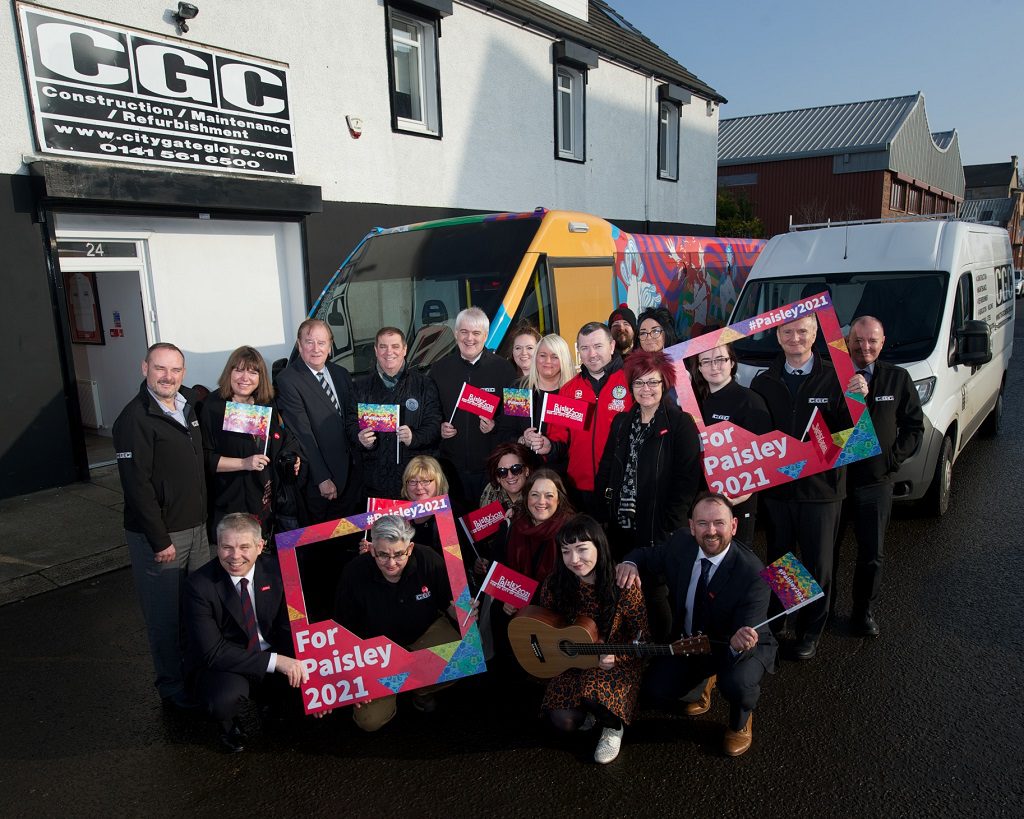 Businesses across Renfrewshire showed their support for Paisley’s bid to become UK City of Culture 2021 after a visit from the state of the art Culture Bus.

The Paisley 2021 bid took to the road yesterday to visit a number of local business organisations, hotels and fitness centres in the area and gain their support.

The Culture Bus, designed by young people from Renfrewshire’s award-winning Street Stuff youth initiative, was taking its third tour of Renfrewshire to raise awareness of the UK City of Culture 2021 bid.

Representatives from Street Stuff, the STAR project, Renfrewshire Chamber of Commerce, CREATE Paisley and the Paisley 2021 team jumped on the Culture Bus for a full day of exciting events.

After beginning its journey at Engage Renfrewshire, the bus stopped off at a number of organisations including Prolife Fitness Centre, Origins Gym, City Gate Construction, Glynhill Hotel and Spa, The Experience, Boston Networks, Campbell Dallas, The Normandy Hotel and The Gleddoch Hotel.

The Culture Bus initiative is part of Paisley’s UK City of Culture 2021 bid and took its first tour of Renfrewshire in October 2016.

To date, almost 200 local businesses and organisations have formally backed the Paisley 2021 bid and they have urged others to show their support.

Construction business City Gate Construction has thrown its weight behind the campaign by ensuring its fleet of sixty vans feature the Paisley 2021 branding.

Leo Reilly, Managing Director of CGC, said: “As a Paisley business we are proud of our town and proud of Renfrewshire.

“This is a campaign which must be won because of the benefits it will bring to tens of thousands of people. The economic impact of winning is huge and we will be doing everything we can to make that happen.”

Fran Porter, Project Executive at Renfrewshire Chamber of Commerce, said: “It was great to get out on the Culture Bus to businesses all across Renfrewshire and generate awareness of Paisley’s bid for UK city of Culture 2021.

“Gaining support from local businesses such as City Gate Construction, Boston Networks The Experience and Glynhill Hotel and Spa shows the extent of our fantastic business community and can only help boost Paisley’s quest to become UK City of Culture 2021.”

Renfrewshire Council Leader Mark Macmillan, Chair of the Paisley 2021 Partnership Board said: “We are delighted to see so many local businesses and organisations come forward and show their support for Paisley’s bid to become UK City of Culture 2021.

“For the bid to be a success, we need to be able to show the judges we have support from throughout the local community, and our businesses are a vital part of that.

“The Paisley 2021 website displays the logos of every one of the nearly-200 businesses which have formally backed us so far, and we want as many others doing the same as possible.”

The Culture Bus was designed by young people following a consultation led by Paisley 2021 and Street Stuff staff.

The Street Stuff initiative is run by a partnership including Renfrewshire Council, St Mirren FC, Police Scotland and Scottish Fire and Rescue and has helped see a fall in youth disorder locally by 75% since 2009.

Find out how you can back Paisley’s bid for UK City of Culture 2021 by visiting http://www.paisley2021.co.uk/partners/

Glasgow News? Daily Updates part of our network
Online dating: how to succeed