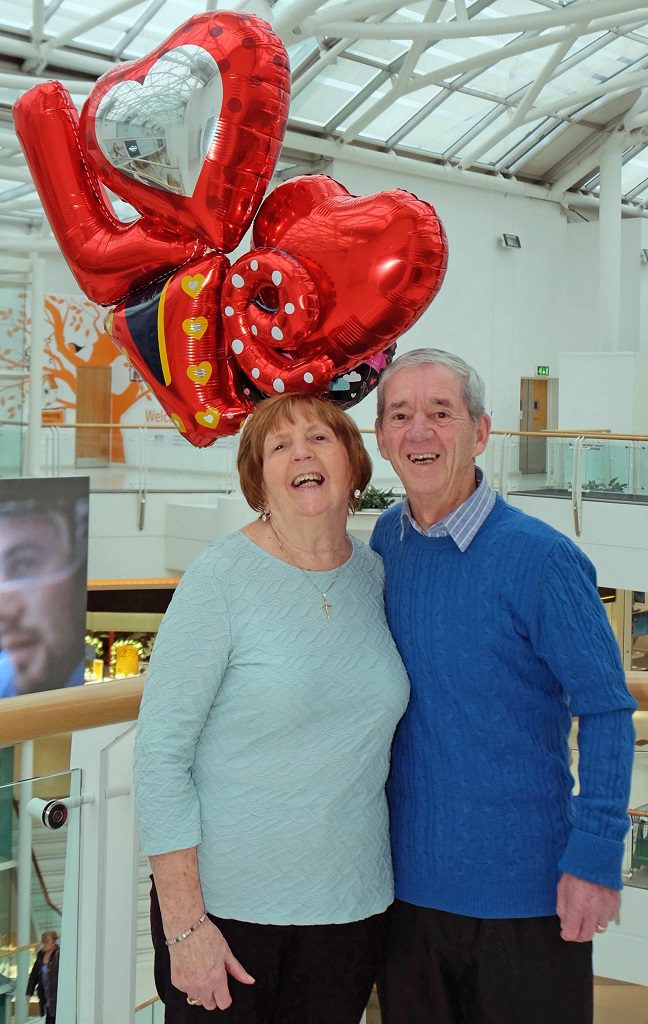 LOVED-UP pensioners Helen and James McLaren have been married for 56 years – but they’ve shown you’re never too old for romance.

Helen, 75, wrote a message to her 80-year-old hubby, James on a cardboard leaf and hung it on a branch of the intu Braehead Love Tree, as part of the shopping and leisure destination’s Valentine’s celebrations.
Scores of people hung messages on the Love Tree and Helen’s was chosen to win a £500 holiday voucher, from Barrhead Travel.
Helen’s message to James read: “You’ve been my Valentine for 57 years.”
According to the romantic couple, who live in Erskine, Renfrewshire, it was love at first sight when they both met at a house party and James plucked up the courage to ask Helen if she would go to the cinema with him the following week.
One date followed the other and just over a year later James and Helen were married in July, 1960. Now, the couple have four children, five grandchildren and one great-grandson.
Helen said: “I saw the Love Tree in the shopping mall and on the spur of the moment I thought I would write a wee message for James. “We’re quite romantic and have never missed sending each other a Valentine’s card since we started going out all those years ago. We just seem to get on with each other.”
James said: “I just love Helen’s attitude to life and when I first met her at my pal’s party, I had asked her out before the end of the night.”
And he joked about the secret of a long and successful marriage: “I just do what I’m told and a lot of hoovering at home!”
Helen is planning to spend the Barrhead Travel holiday voucher on a trip to Rome.
Marketing manager for intu Braehead, Christine Macdonald said: “James and Helen are such deserving winners we hope their trip to Rome is a romantic as they are. “Cupid was certainly on target with his bow and arrow on the night they met.”

Glasgow News? Daily Updates part of our network
What Is A CVA?