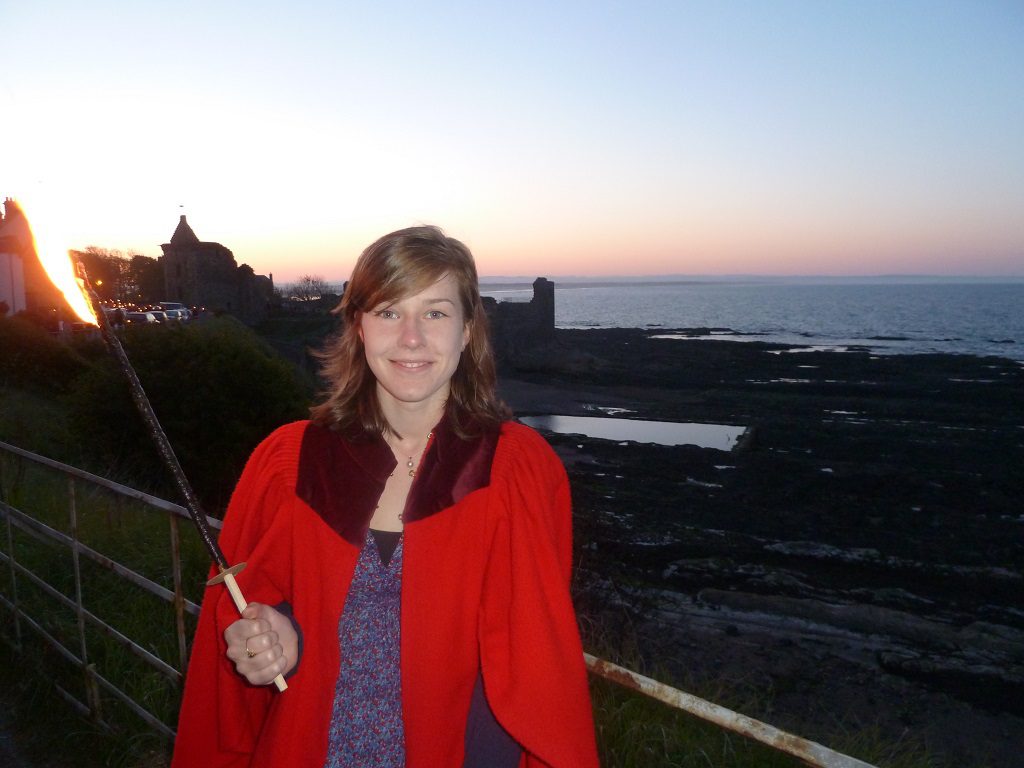 A NEW walk is to be launched in memory of Ellie MacDonald who died from cancer aged just 23 only weeks after graduating from St Andrews University. Ellie’s mum Michelle-who has overcome breast cancer twice- is set to join family and friends as well as more than 100 students on October 29 at Cambo Estate in Fife and walk the nine mile coastal picturesque path to finish at Castle Sands in St Andrews. It’s a flagship event for 1 Million Miles for Ellie, an appeal to raise a million pounds for those touched by cancer. The appeal which started last summer urges people to raise money by doing anything from a simple walk on the beach to a mountain climb, a kayaking expedition to a triathlon- all to beat cancer sooner. After adding up all the miles covered by participants, organisers hope to hit their million mile target. Money raised will be split between Cancer Research UK, which funds research in to 200 cancers, Maggie’s which offers free support to people with cancer as well as their family and friends and Macmillan Cancer Support which provides practical, emotional, financial and medical support to anyone affected by cancer. Michelle, 51, of North Uist said: “Ellie was so precious to all our family and meant everything to me.

“Ellie made a bucket list before she died and it was packed full of adventurous plans. It showed how she really believed anything was possible. We’re keen to capture that enthusiasm, energy and inspiration in 1 Million Miles for Ellie.

“Our family are so grateful to the amazing students at St Andrews University for supporting us. This walk is going to be a huge success. It will be a lovely chance for our family to retrace Ellie’s footsteps and see some of the places where she was happiest during her time at university.”

Participants will be encouraged to collect some stones on the walk to add to a cairn which will be created as a tribute to Ellie on the beach at Castle Sands. The walk is organised jointly by students who are members of the Don’t Walk fashion show committee and the St Andrews Charity Fashion Show committee.

“We’re inspired by the appeal, its message and the impact Ellie had within the St Andrews community. The walk is really exciting as there is a perceived rivalry between the two fashion shows. By joining forces to contribute to a cause so close to us all as St Andrews university students, we are showing the rest of the student community that in fact there is no rivalry and that we can work to create something bigger and more meaningful together rather than separately.”

More than £70,000 has already been raised since 1 Million Miles for Ellie started last summer when hundreds of purple balloons soared in to the sky as a tribute to Ellie. It was a chance for Ellie’s mum and dad, Michelle and Angus MacDonald, both 51, and for Ellie’s brothers Fraser, 23, and Alexander, 11, and sister Sarah, 19, to remember Ellie who died on September 18, 2014. Purple which was Ellie’s favourite colour was everywhere on the day of her funeral in North Uist, from the clothes mourners wore to the heather, lavender and thistles which filled the kayak she had loved so much. When Ellie’s coffin passed Paible Primary school where she had once been a pupil, all of her brother Alexander’s classmates were lined up like a guard of honour in the playground.

Ellie was in her final year of a degree in management when she was diagnosed with bowel cancer in December 2013. Her mum Michelle was with her every step of the way through her fight with the disease. It brought back memories of more than a decade earlier when Michelle was diagnosed with breast cancer. Michelle was pregnant when she was first diagnosed in February 1998. Doctors explained that to save her life she needed to start chemotherapy then surgery urgently which meant losing the baby. When breast cancer returned in 2007, Michelle endured a second mastectomy but got through it again with support from all her family.

Michelle said: “I was with Ellie when she was told she had cancer.

“She took it so well. Her mum had got over it twice so why shouldn’t she? I would have given her my life in a second but it doesn’t work that way. To lose a child under any circumstances is hard to come to terms with. To lose a child to a disease that has blighted our family twice and taken a child already is unbearable.”

Ellie packed so much in to her final few months- graduating from university, kayaking with her dad, jumping for joy on a Spanish beach with her boyfriend Robert Przepiorka, 26, and writing a bucket list of 10 wishes which included as number one a determination to “destroy cancer.” But the cancer had spread to Ellie’s liver and she died at Ninewells hospital, Dundee surrounded by her family.

Michelle said: “Ellie is buried next to John Joseph, the baby I lost when I had cancer.

“Even if I started as a baby and lived a long life I know I couldn’t walk a million miles alone but that distance could be covered with the help of people across Scotland and across the world. I don’t need to do this on my own as I believe together we can beat cancer. That will be my tribute to Ellie.”

Please look at 1 Million Miles for Ellie, a million pounds for those touched by cancer, at www.1millionmilesforellie.co.uk

Businesses urged to prepare for winter weather
Scroll to top