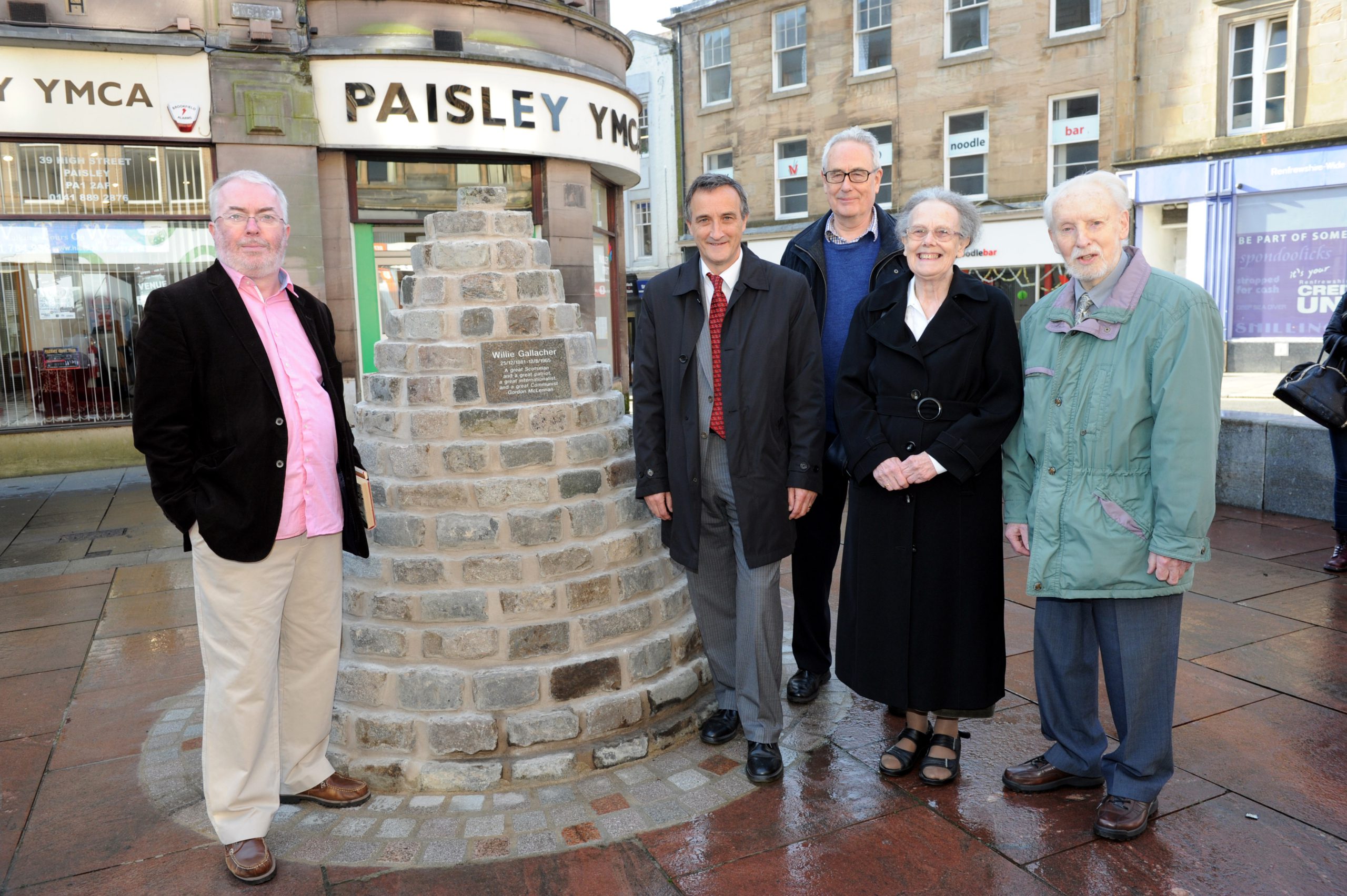 One of Paisley’s most famous political sons has been remembered with the unveiling of a new cairn on the town’s High Street. Willie Gallacher was born in Paisley on 25 December 1881 and went on to become the UK’s last Communist Member of Parliament, serving two terms in the House of Commons for his West Fife constituency. Gallacher died, aged 83, in Paisley on 12 August 1965, with an estimated 40,000 people lining the town’s streets as his funeral cortege passed.

The one time President of the Communist Party of Great Britain was well thought of both within and out with his own party, gaining respect for his commitment to his principles. Throughout his life, Gallacher worked tirelessly for workers’ rights, often falling foul of the powers that be and law while remaining true to his beliefs.

He was an active member of the ‘Red Clydeside’ movement and campaigned throughout the First World War and afterwards for the establishment and protection of workers’ rights, including a maximum 40 hour working week. In 1916, Gallacher was sentenced to six months in prison under the Defence of the Realm Act for his involvement in the publication of an article criticising Great Britain’s involvement in the war.

Renfrewshire Council’s Depute Leader, Councillor Michael Holmes, said: “Willie Gallacher should be a reminder to us all.  History records his burning ambition to improve the lives of the working class.

“I have had the privilege of speaking to those who knew him and they talk of his self-modesty, his respect for political opponents and his passion for peace and social justice.

“He truly was a giant of the working class – a great parliamentarian and a man who sacrificed his own personal freedom for the causes and philosophy in which he believed.”

Audrey Canning, Custodian of the Willie Gallacher Memorial Library, said: “We are pleased that there is now a lasting memorial to Willie in his hometown. Willie was known and highly regarded for his unwavering adherence to his beliefs throughout his life.

“He was a modest man who did not seek acclaim and lived his life simply and this cairn is a fitting memorial to Willie as it captures how he lived his life and how he’d wish to be remembered.” A simple stone cairn was chosen to commemorate Gallacher in light of the extremely modest way in which he chose to live his life, despite his relatively high profile.

A mini-exhibition celebrating Gallacher’s life and his political achievements is also on display at Paisley Museum. The collection of artefacts, books, newspaper articles and archive videos is open to the public and available to view, for free, until November 12.

The exhibition includes a bronze bust of Gallacher by renowned Russian sculptor Evgeny Vuchetich. Reputed to be Josef Stalin’s favourite sculptor, Vuchetich is best known for the famous Swords to Ploughshares sculpture which sits outside the United Nations’ headquarters in New York.

The unveiling of the memorial cairn was attended by local politicians, members of the Communist Party, relatives and associates of Gallacher.