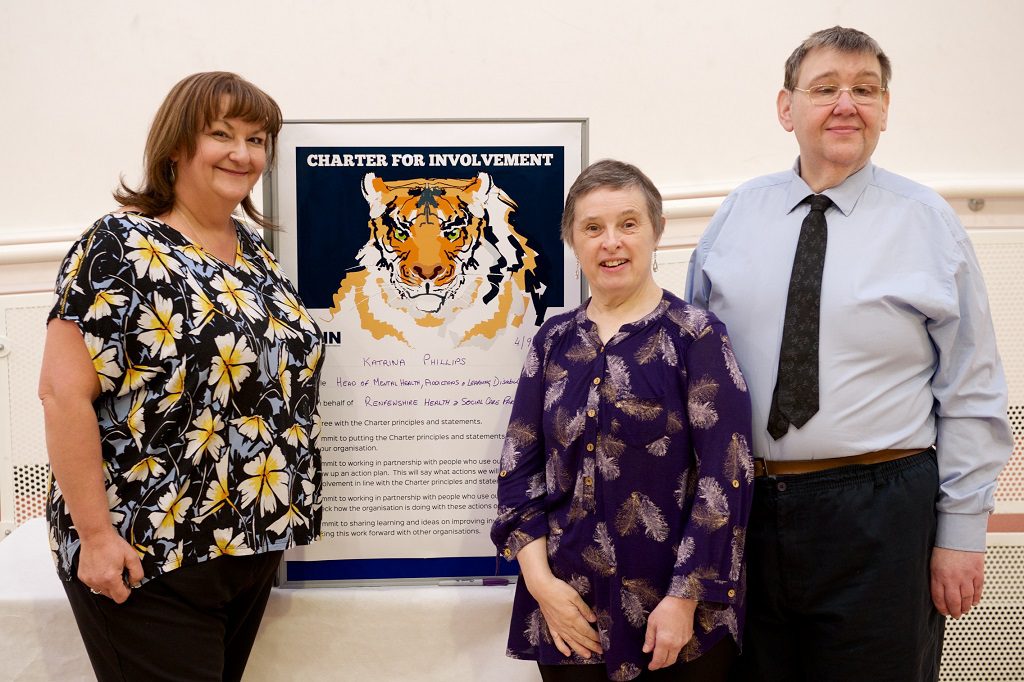 Renfrewshire Health & Social Care Partnership (H&SCP) has become the first of Scotland’s 31 H&SCPs to sign up to a national Charter for ensuring people who use learning disability services will have a say in the issues affecting them. The Partnership  –  which plans, provides and commissions a range of community-based activities and services to support  a wide range of people – has signed up to the Charter for Involvement, a national initiative funded by the Scottish Government and written by the members of the National Involvement Network (NIN).

NIN is a large group of people with learning disabilities who are supported by different organisations across Scotland.  Members share ideas and experiences of being involved in the things that affect them, including the organisations that arrange their support.

Renfrewshire’s pledge commits the local partnership to delivering 12 standards of involvement for people receiving care and support for their learning disabilities on topics including:

The Charter – supported by learning disability charity Association for Real Change (ARC Scotland) – was launched in 2015. So far there are 39 other signatories including national third sector organisations such as Cornerstone, Turning Point Scotland and Quarriers and other regional statutory sector fora.

Renfrewshire H&SCP’s signing up took place in front of 250 Council, NHS and Third Sector health and social care workers at a staff conference in Paisley.  It followed a presentation to delegates by two Renfrewshire-based members of the NIN – NIN Vice chair Brian Robertson, of Paisley and Anne McCready, from Renfrew.

The aim of the staff conference was to:

“We are delighted to be the first Health & Social Care Partnership to sign up to the Charter.

“This Council has set ambitious plans to improve opportunities and make Renfrewshire a place where all our people, communities and businesses thrive.

“People who use our health and social care services are a very important part of our community. It is essential that we do as much as we can to involve them in decision-making and action which will help them live their lives as fully as possible.

“The Charter is a great way of formalising these aspirations.   The fact that it was agreed by a group of people who use social care services – including local residents Brian and Anne – and were willing to share their ideas shows exactly what can be done, with the right will and support.”

James Fletcher, Chief Executive of ARC Scotland, said: “We are very pleased that Renfrewshire has decided to sign up to the Charter and we warmly welcome them. They are doing some great work in the area and their commitment to the Charter’s standards will only add to this.

NIN Vice-Chairperson Brian Robertson, from Paisley, said: “We’ve had a great response to the Charter since it was first launched and I hope that Renfrewshire’s lead in signing up will be followed by other H&SCPs and Councils in the near future.”

Anne McCready, NIN member, from Renfrew, said: “It is very interesting to see the Charter working and it is very worthwhile for other people that I know who get support.”

For more information on the Charter for Involvement , see  http://arcuk.org.uk/scotland/charter-for-involvement/