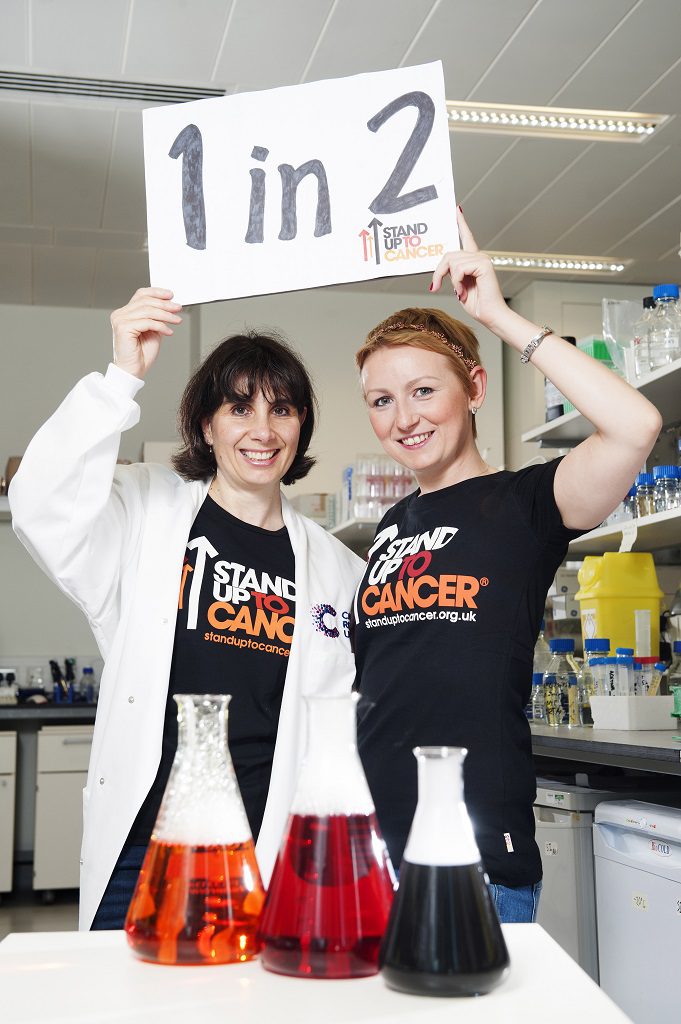 A GLASGOW breast cancer survivor has joined forces with a city scientist to Stand Up To Cancer and highlight that one in two people will be diagnosed with the disease at some point in their lives. Cancer scientist Dr Karen Blyth, of the Cancer Research UK Beatson Institute in Glasgow, took Yvette Hutcheson on a special tour of her lab ahead of Friday’s Stand Up To Cancer television fundraiser on Channel 4.

Yvette, who was diagnosed with cancer when she was just 28-years-old, saw first-hand how scientists in Scotland are working hard to beat cancer sooner.

In support of Stand Up To Cancer, Karen and Yvette also posed with a placard emblazoned with the words ‘1 in 2’, as one in two people will be diagnosed with cancer at some point in their lives.

Stand Up To Cancer is a joint fundraising campaign from Cancer Research UK and Channel 4 which aims to help save more lives, more quickly.

The campaign, which is supported by celebrities including Davina McCall and Alan Carr, culminates this Friday October 21 with a night of live TV on Channel 4 led by the brightest stars in film, TV and music.

Money raised funds translational research, which takes developments in the lab and transforms them into brand new tests and treatments for cancer patients.

Karen and Yvette are urging all Scots to show their support and join the rebellion against cancer.

Scientist Karen and her team at the Cancer Research UK Beatson Institute are studying a family of genes called RUNX genes to try and understand the role they play in breast cancer – in particular triple negative breast cancer which is more difficult to treat than other breast cancers. They hope that this information could help develop new and better treatments for the disease.

She said: “In forty years we’ve gone from a situation where women diagnosed with breast cancer had only a fifty-fifty chance of survival, to today, where almost 90 per cent of women survive breast cancer to five years after their diagnosis. That’s amazing, but we need to keep fighting on in the lab to make even more progress.

“It was an honour to meet Yvette and hear about her brave battle against cancer. I’m proud to stand together with her today and join her call for people in Glasgow to do what they can to support Stand Up To Cancer this year.”

Yvette knows only too well just how crucial new discoveries and breakthroughs are to help people like her survive. She was diagnosed with breast cancer on July 24 2015 after discovering a lump in her right breast.

Yvette said: “It was a major shock when I was told I had cancer as I was still so young with no family history of the disease. I remember looking at my dad who was with me and we were both just stunned.”

“The doctors explained I’d have to wait a week before the biopsies could 100 per cent confirm I had cancer but they thought it was. I don’t even remember leaving the hospital that day. We got to the car and were in bits. It took us ten minutes to gather ourselves together before we could even drive home.”

A week later, tests confirmed that Yvette had HER2 positive breast cancer. But – following six lots of chemotherapy, surgery to remove the breast lump and 20 sessions of radiotherapy – brave Yvette completed her treatment this spring.

Now she gets an injection of the breast cancer drug, Herceptin once every three weeks. She will receive 18 in total and her final injection is scheduled for November 25.

Cancer Research UK scientists played a crucial part in the early development of Herceptin by helping to establish the link between some breast cancers and ‘growth factor receptor’ proteins on the surface of cells.

Yvette said: “I’m standing up to cancer because my story shows the real power of research and why it’s so important to keep raising money to fund the vital work scientists like Karen are doing every day to beat cancer.

“I know what it’s like to go through cancer. I had the full bhuna of treatment – I had chemotherapy, radiotherapy and surgery and I’m still getting hormone therapy and immunotherapy. But hopefully, through money raised by Stand Up To Cancer, people won’t need to do the full shebang in the future and treatment will be easier for them.

“That’s why I want to encourage as many people as possible to join with Karen and me and stand up to this devastating disease.”

Every day, 85 people are diagnosed with cancer in Scotland.* By joining Stand Up To Cancer, supporters in Glasgow will be uniting with doctors, nurses, scientists and celebrities to generate funds, raise awareness and help accelerate progress in life-saving cancer research.

There are many ways to Stand Up To Cancer and show support. Cancer Research UK is calling on Scots to take a stand and do something to help raise money at work, school or at home – from fancy dress days and sponsored silences to bake sales and open mic nights. The charity is urging people in the city to get started right now and sign up for their free fundraising pack which includes everything supporters need to spark creative ideas and help beat cancer sooner.

Victoria Steven, Cancer Research UK’s spokesperson for Scotland said: “We’d like to thank Yvette and Karen for standing up to cancer with us.

“Yvette’s experience brings home the fact that one in two of us will be diagnosed with cancer at some point in our lives. Cancer doesn’t discriminate. Whether it’s you or someone you know, it leaves its mark on us all.

“So the time to act is now. We’re on the brink of a revolution in cancer research – thanks to new treatments, screening and earlier diagnosis,more people are surviving the disease than ever before. But we can’t afford to stand still. It’s time to rebel against cancer, raise money and save lives. Research is our weapon against this terrible disease and we’re calling on an army of supporters in Glasgow to stand up to cancer and show their support.”

People across the city can also show their support for the campaign in style as a fun range of clothing and accessories for men, women and children is available online at standuptocancer.org.uk

For more information and to get involved visit standuptocancer.org.uk