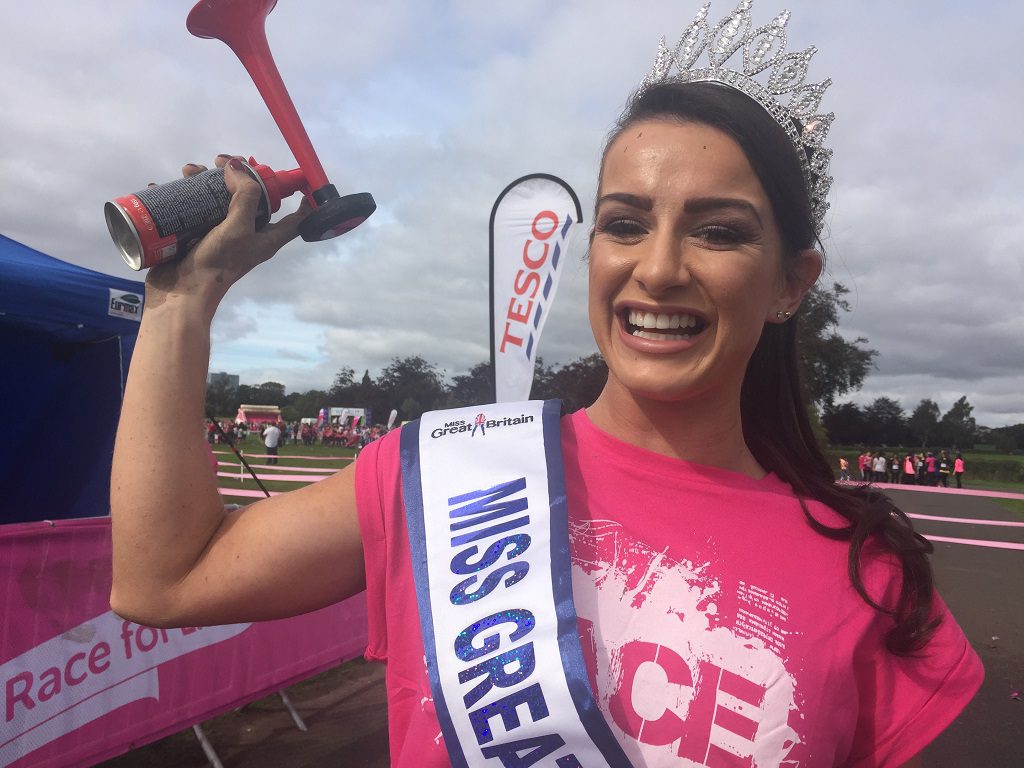 MISS Great Britain Deone Robertson paid tribute to her inspirational aunt who has fought cancer twice as more than 10,000 women across Scotland got pretty muddy to help beat the disease sooner. Beauty queen Deone from Cumbernauld dedicated her medal for crossing the finish line of the 5K mud splattered course to her aunt Cathie Neil in recognition of the remarkable courage shown during a fight with cancer. Deone,who was chosen as VIP starter for the event at Bellahouston Park in Glasgow on Saturday (September 17), sounded an airhorn to set off a pink army of more than 5,772 women of all ages, shapes and sizes on obstacles including an inflatable mud slide and scramble net. And in Edinburgh on Saturday at the Royal Highland Centre, Islington, 4,600 women took part in Pretty Muddy- all to raise vital funds for Cancer Research UK.

Deone, 28, said: “I feel so proud to be part of a powerful, passionate pink army of women at the frontline in the fight against cancer.

“The one thought which pushed me on to the finish line at Pretty Muddy was just how brave my Auntie Cathie has been through cancer over many years. She’s my mum’s sister and we’re a really close family. I’m so proud of how she’s taken everything life has thrown at her head on. I’m also really keen to support Cancer Research UK as I know cancer is something which affects almost every family. It touches so many lives but events like Pretty Muddy are a chance to fight back, to find a way to come together to beat cancer. It’s a great event, running, laughing and getting pretty muddy all for a wonderful cause.”

Deone was still in primary school when Cathie, now 59, was first diagnosed with cervical cancer in 1995. Mum of three Cathie had to take a break from her job as a hotel chef to endure surgery followed by radiotherapy for eight weeks before getting the all clear. But it was a hammer blow in 1998 when tests showed Cathie had cancer of the bowel and bladder, meaning more surgery and a long recovery period. She was left with long term side effects but is today clear of cancer.

TV presenter Cat Cubie also took part in Pretty Muddy Glasgow, joining Kate’s army, a 50-strong group who have raised more than £4,000 for Cancer Research UK. They signed up in memory of law student Kate Bowman of Mount Vernon who died on June 4 this year aged 25 from a rare form of ovarian cancer. Cat and Kate met last summer when they were both VIPs at Pretty Muddy Glasgow. The pair had vowed to return this year to complete the challenge together but instead mum of one Cat joined Kate’s sisters, Laura Bowman, 30, and Elaine Docherty, 28, to complete the course. Cat said: “Kate battled- and battled is the right word because she was such a fighter.

“She was just 23 when diagnosed with ovarian cancer. She was a beautiful person inside and out. She was so strong.

“I first met Kate when we did a photoshoot to promote Pretty Muddy. We had both hoped to actually take part in the 5K but I was advised not to as I was pregnant at the time and although Kate really wanted to, sadly chemotherapy stopped Kate. We made a pact that we’d do it together in 2016. I feel so sad she’s not here. I’m honoured to be part of Kate’s army. We’re all in this together and we’re going to get you cancer.”

Cancer Research UK’s Race for Life, whose official energy sponsor is ScottishPower, is an inspiring women-only series of 5k, 10k, Pretty Muddy and marathon events which raises millions of pounds every year to help fund life-saving research. Every hour, around three people are diagnosed with cancer in Scotland* and the number of people being diagnosed with cancer has now reached around 30,200 cases each year.**

One in two people in the UK will be diagnosed with cancer at some stage in their lives, but the good news is more people are surviving the disease now than ever before. Survival rates have doubled since the early 1970s. Money raised through Race for Life allows Cancer Research UK’s doctors, nurses and scientists to advance research which is helping to save the lives of men, women and children across Scotland and the UK.

Race For Life’s area events manager for Glasgow, Angela Wilson said: “I want to say a huge thank you to everyone who took part in Pretty Muddy Glasgow.

“The atmosphere was full of emotion with participants wearing signs on their backs declaring their reasons for taking part. Many will be remembering loved ones lost to cancer or celebrating the lives of people dear to them who have survived.”

Paisley Pirates – Team of the Year
Scroll to top