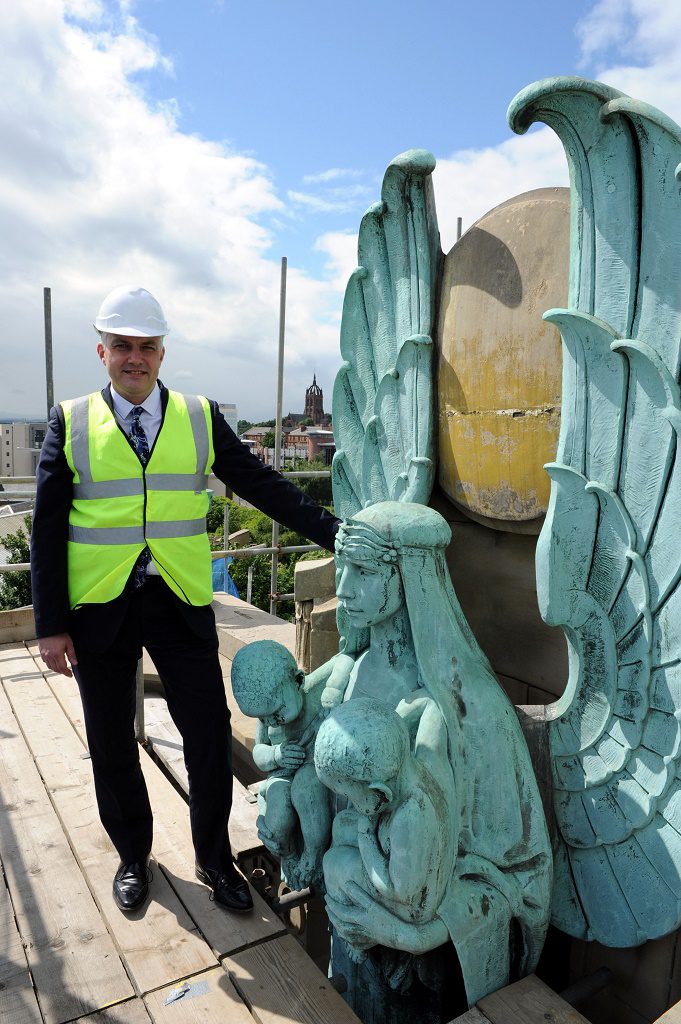 Renfrewshire’s council leader was given a behind-the-scenes look at work on Paisley’s iconic Russell Institute building…and declared it will be ‘spectacular’ when it reopens next year as a skills and employability hub. The striking A-listed former health centre on the corner of Causeyside Street and New Street is halfway through a year-long £5m council-led project to restore it to its former glory.

When it reopens next year it is expected to bring around 80 new office jobs into the town centre, with national skills body Skills Development Scotland moving in as anchor tenants, alongside staff from the council’s Invest in Renfrewshire employability team.

And Councillor Mark Macmillan and SDS director of operations Danny Logue donned their hard hats for a tour of the facility to see the latest progress.

Since construction kicked off at the end of last year, main contractors CBC Ltd have been cleaning the external stonework and repointing some of the distinctive and intricate statues on the outside of the building.

Internally, the recognisable entrance hallway, staircase and balcony remain in place but work has been ongoing to turn the small rooms and cubicles of the former clinic into bright and open office space.

Councillor Macmillan said: “It was great to get a look inside the building and to see how the work is progressing – the revamped building will be spectacular.

“Along with Arnotts, the planned museum revamp, and with work starting soon on the museum store on the High Street, this is just one of several current major regeneration projects making the most of Paisley’s unique architecture and history.

“That unique heritage will be key to the town’s bid for UK City of Culture 2021 and – as people will have noticed – the scaffolding around the Russell Institute has been used as an opportunity to help showcase the bid.

“From speaking to people around the town you realise how many residents have their own stories and memories of visiting here while growing up, so from that point of view it is great we are keeping the building alive for future generations too.

“The work taking place here is preserving the original 1920s features while creating bright and open 21st-century office space which people will enjoy working in.”

Danny Logue of SDS added: “It was fantastic to see the work that has been done already to breathe new life into this building.

“We are really looking forward to moving in and continuing to help the people of Renfrewshire to achieve careers success, as well as supporting businesses to grow and develop the skills of their workforce.”

The work is being funded by Renfrewshire Council, the Scottish Government’s Regeneration Capital Grant Fund and Historic Environment Scotland.

The Paisley Development Trust kicked the project off by commissioning an initial feasibility study into its use.

The Russell Institute was opened in 1927 and was gifted to Paisley Burgh by Miss Agnes Russell, who wanted it to be used as a child welfare clinic as a memorial to her two brothers.

Poverty Commission Chair: More than 70% drop in sanctions is “an important...
Scroll to top