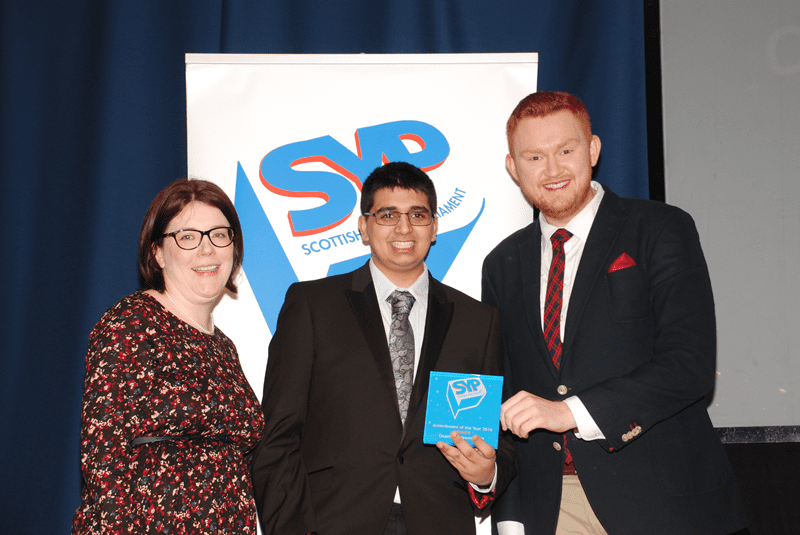 An aspiring politician who campaigned to change a curfew on child bus tickets has won a top award for his work in the Renfrewshire community. Osama lobbied local councillors, MSPs and MPs for their support to challenge local bus company McGill’s on their policy which saw a child’s all day ticket become invalid after 7pm.

Young people were disadvantaged by being unable to take advantage of the reduced fare in the evening which caused issue for those attending after school and evening sports clubs.

Osama met with the bus company who responded positively and advised they would extend the curfew to 10pm for the use of child tickets.

He said: “”I’m delighted to receive this award from the Scottish Youth Parliament and it has inspired me to continue to campaign for change.

“The curfew had been a big issue with young people who use the bus service so it has been great to solve this problem for my constituents.

“As a representative of Paisley, and Renfrewshire as a whole, it is great to have a successful campaign which benefits all of Renfrewshire’s young people.”

Peter McLeod, Director of Children’s Services, said: “This is a great achievement. Osama listened to what his constituents had to say and took it to the highest level of decision makers in order to make change.

“Not only has Osama achieved a great financial deal for Paisley’s young people he has in fact eased the financial burden for all of Renfrewshire’s young people who use the local bus service.”

In June last year, Renfrewshire hosted the first SYP Sitting since the Scottish Youth Parliament elections held in March which around 150 MSYPs attended.

Katie Burke MSYP, Vice Chair of the Scottish Youth Parliament, said: “Osama embodied what being an MSYP is all about by listening to his constituents, and tackling the problems affecting the lives of young people head-on.

“Osama says there is still work to be done, and would like to see more fare discounts available with a Young Scot card.”

“We can’t wait to see what the next stage of his campaigning will lead to.”