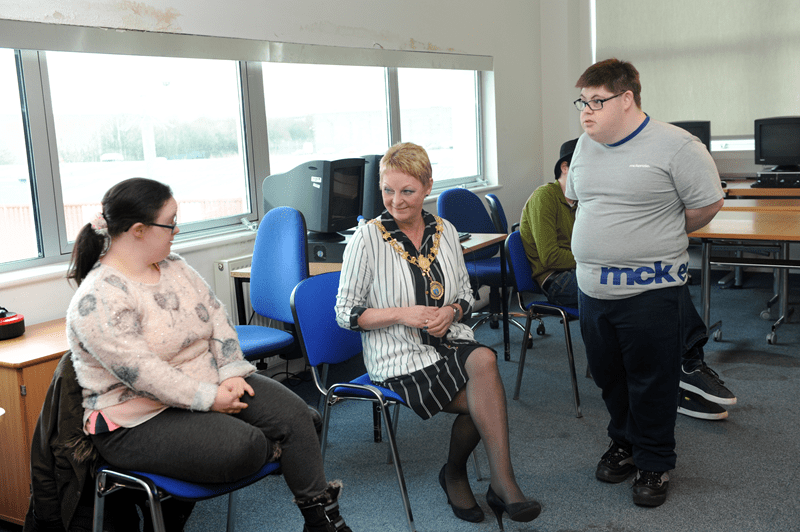 Renfrewshire Provost Anne Hall went back to school in the name of charity – spending the day working at West College Scotland in Paisley. The challenge saw the Provost earn the living wage, with the donation going to the Provost’s charity fundraising scheme. Provost Hall spent the morning working with student support workers who examine the needs of each student on a case by case basis in order to support their learning effectively.

The afternoon saw the Provost meet with both students and employers to discuss work placements and their importance in providing real life job skills as part of their course.

Provost Hall supports four charities within Renfrewshire close to her heart – Renfrewshire Carers Centre, Recovery Across Mental Health (RAMH) and both Accord and St Vincent’s Hospices – and has raised over £25,000 during her time as Provost.

Provost Hall said: “The working challenges give me a great opportunity to see the terrific work which goes on within Renfrewshire whilst also raising money for my four chosen charities.

“West College Scotland are providing thousands of students with the opportunity to learn, develop and improve their career opportunities; which they will hopefully come to utilise within Renfrewshire.

“It was great to gain an insight into one of Renfrewshire’s foremost educational facilities and I was delighted to raise money for my chosen charities at the same time. The money raised will allow them to continue the vital work they undertake within Renfrewshire.”

Paul Martin, Curriculum & Quality Leader for Learner Development at WCS Paisley Campus said: “It’s brilliant that the Provost has given us her time so that she can see the fantastic work put in by all students and staff in the Learner Development here at West College Scotland. She made a great contribution and everyone involved will benefit from her time with us.”

For further information on the Provost’s charity fundraising visit:http://www.renfrewshire.gov.uk/provostcharity

Glasgow News? Daily Updates part of our network
Paisley to host the Scottish Album of the Year Award 2016