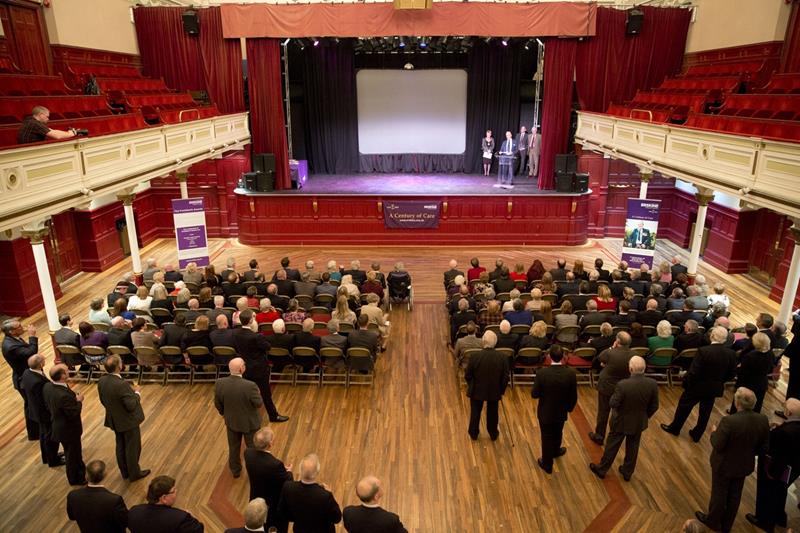 A civic reception was held to honour a century of care provided by staff and volunteers for ex-service and serving men and women in Renfrewshire. A series of speeches on the history of Erskine accompanied the launch of a new book- Erskine: A Century of Care- which tells the story of the how the new hospital was established.

At a public meeting held in Glasgow City Chambers on 29th March 1916, the proposal to establish a hospital in the West of Scotland for amputees wounded in battle was approved.

Within a few weeks £100,000 was contributed and that figure doubled within the year. Today the charity needs to raise over £8.5million a year to continue the work started in 1916.

The charity is the UK’s foremost provider of care and support for veterans and their spouses and recently completed the build of over 40 veterans’ cottages at Bishopton – suitable for ex-Service representatives and their families so they can enjoy more independent living together.

The centenary coincides with Renfrewshire’s participation in a national programme of commemorative, educational, cultural and community events to mark the 100th anniversary of the outbreak of the First World War.

Renfrewshire Reflects will span a four-year period from 2014 to 2018 focusing on the impact of the war and on marking the significant events of the conflict.

Renfrewshire’s Provost Anne Hall said: “I am delighted to be able to support Erskine as they celebrate a hundred years of care in Renfrewshire.

“A civic reception shows the regard our community has for Erskine. Their work provides ex-service and serving men and women with a higher quality of life and serves this brave community in the manner it should.

“The charity are a credit to Renfrewshire and I’m sure their work will continue long into the future.”

Lieutenant Colonel Steve Conway, Erskine Chief Executive said: “This event marks the start of our centenary events which also include a Service of Commemoration in Glasgow Cathedral, Open Days, and the Erskine Ball, which this year returns to Mar Hall where the hospital was founded.

‘I think it is fitting that this year we pay tribute to all those staff and volunteers who have cared for over 85,000 veterans to such a very high standard, and also thank all our supporters, past and present, that enable us to continue our work.

“I hope as many people as possible will be able to join us at our events to learn a little more about our history and join us in our celebrations.”