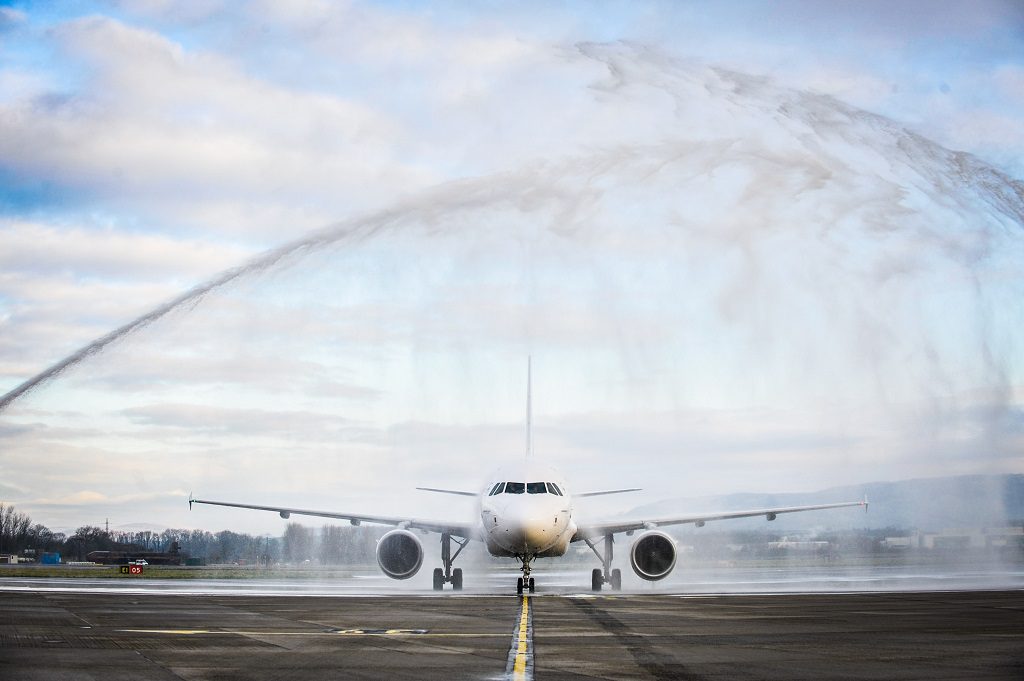 On board the official inaugural Air France flight from Paris, which was greeted by a water cannon salute upon arrival, were Henri de Peyrelongue, Air France Senior Vice President Europe alongside French media and VIPs. 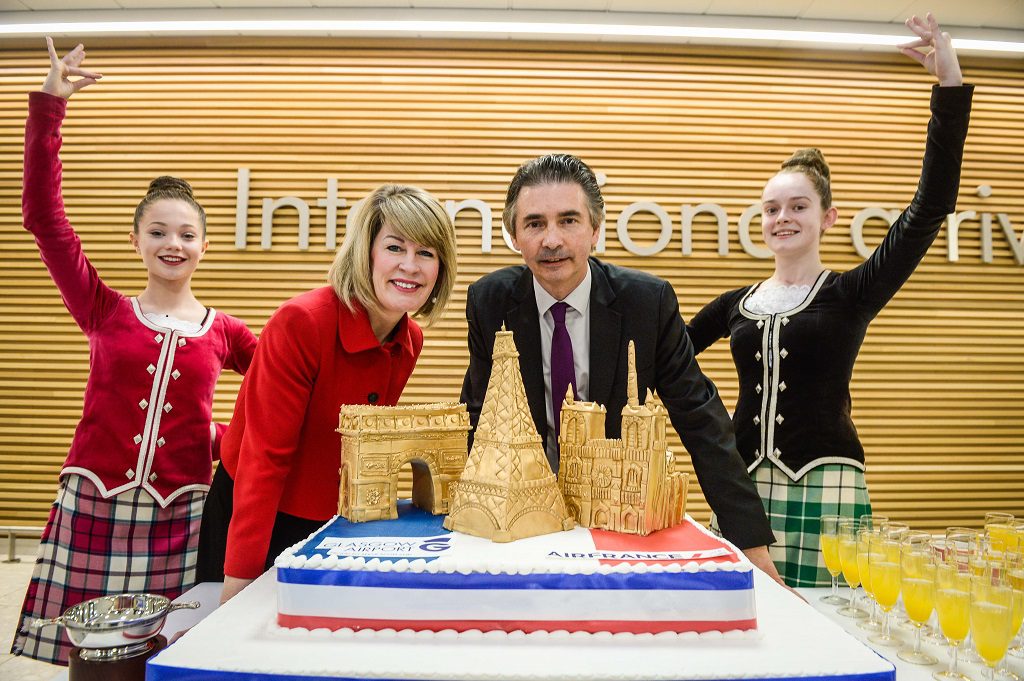 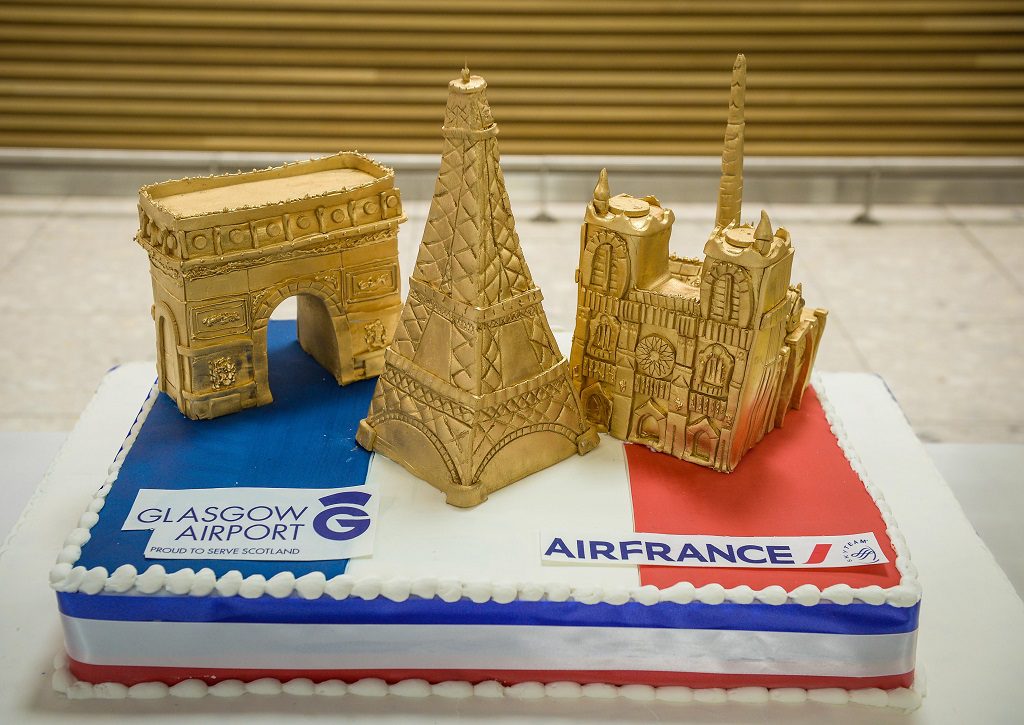 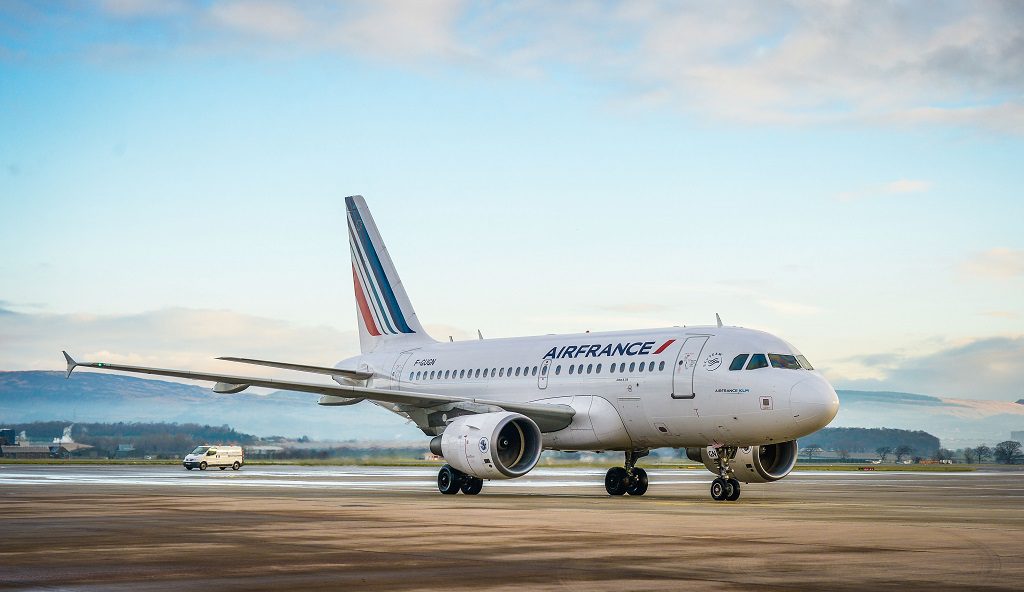 This celebration came after the operations began on Sunday 27 March 2016. The daily flight connects Glasgow to Air France’s international hub in Paris-Charles de Gaulle. The airline offers a number of connections to its worldwide network of over 130 destinations from Scotland, including Shanghai, Tokyo and New York. The daily flight is operated by an Airbus A318, carrying up to 131 passengers.

Every year, close to 15 million visitors travel to Scotland for both business and leisure. By serving Glasgow from Paris-Charles de Gaulle, Air France is offering customers the opportunity to fly to one of the fastest growing destinations in Scotland, boasting strong economic and tourist attractions.

With the addition of the Air France Glasgow to Paris-Charles de Gaulle route, the AIR FRANCE KLM Group has strengthened its overall presence in Scotland and offers more than 150 weekly flights. In total the Group offers 7 routes from 4 Scottish airports (Glasgow, Edinburgh, Aberdeen and Inverness) to Paris-Charles de Gaulle or Amsterdam Airport Schiphol, where passengers will be able to connect to the extensive AIR FRANCE KLM worldwide network.

Warner Rootliep, General Manager AIR FRANCE KLM UK & Ireland said: “Demand from Scotland continues to grow which is why our Group has always invested in its Scottish network and local relationships with the region. Today we celebrate the introduction of the Glasgow-Paris route and looking at the results of the route so far, I am confident we will make it a success. AIR FRANCE KLM’s Scottish offering will ensure that local businesses are better connected to key markets around the world and we are proud to provide the largest city in Scotland with connectivity to and from key worldwide destinations”

Amanda McMillan, managing director of Glasgow Airport, said: “To be able to officially welcome Air France to Glasgow Airport today is fantastic – both for the city and our customers.  Air France is a major player in the world of aviation with an extensive route network through its hub at Paris Charles de Gaulle into important global markets such as South America, China, India and Africa. The airline’s introduction of a daily service from Glasgow Airport this summer will play a crucial role in encouraging export led-growth, attracting further inward investment and supporting Scotland’s burgeoning tourism industry. Glasgow is the economic powerhouse of Scotland and the arrival of the French national flag carrier will further boost our connectivity with the world. We are looking forward to working with Air France to ensure the success of this exciting new service.”

Councillor Frank McAveety, Leader of Glasgow City Council and Chair of Glasgow City Marketing Bureau, said: “The arrival of Air France’s inaugural Paris flight into Glasgow is a significant boost for the city’s economy. Securing France’s national air carrier and the introduction of a direct daily, year-round service will further strengthen cultural and business links between Paris, Glasgow and the wider west of Scotland. There will undoubtedly be strong demand for this service, which has the potential to deliver considerable inbound leisure and business tourism. It will also vastly improve the city’s competitiveness by providing passengers with greater worldwide connectivity through one of Europe’s largest hub airports and Air France’s membership of the SkyTeam alliance route network. Glasgow is constantly striving to grow its air links and connect the city to the global marketplace. We’re looking forward to working with Air France, Glasgow Airport and VisitScotland on joint marketing communications activity in the coming months to ensure the success of this new route.”

Malcolm Roughead, Chief Executive of VisitScotland, said “We are delighted to welcome the launch of Air France’s direct service from Paris-Charles de Gaulle to Glasgow Airport. The romance of its dramatic landscapes and the richness of its culture and traditions make Scotland a popular destination for visitors from France – currently one of our biggest European markets and set to deliver strong future growth. Glasgow, too, is increasingly becoming a must-visit destination for the French traveller, combining the cultural vibrancy of city life with the stunning scenery of Loch Lomond & The Trossachs National Park right on its doorstep.

This new route presents a fantastic opportunity for Scottish tourism to grow through increased connectivity, not only for our French visitors, but also our long-haul and emerging markets via the Parisian global hub.”