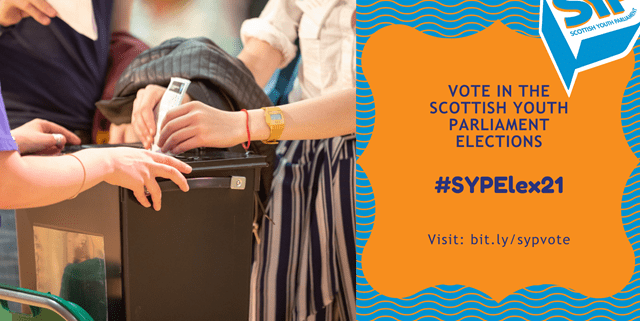 The Scottish Youth Parliament is the democratically elected voice of Scotland’s young people, providing a national platform for young people to discuss issues important to them and affect the change they wish to see locally and nationally.

It has been influential in helping secure votes for 16-year-olds in Scotland, been a key voice in the campaign for equal marriage and recently delivered the Pack it up, Pack it in campaign tackling pollution, reducing single-use packaging and improving recycling.

Held every two years, voting is now open for the 2021 SYP Elections, with MSYP candidates standing in the Paisley; Renfrewshire North and Renfrewshire South constituencies.

Young people aged 12-25 can cast their vote online before the voting period closes at 3pm on Sunday 21 November 2021.

Voting is through the Young Scot e-voting system and voters will need to have a Young Scot National Entitlement Card.

There’s more about the elections, how to vote and details of the candidates standing in Renfrewshire on the Young Scot website.

Councillor Michelle Campbell, Renfrewshire Council’s Young People’s Champion, said: “It is so important for young people to have their voices heard and throughout my time at the council I’ve had the pleasure of meeting the MSYPs representing Renfrewshire and have seen first-hand how passionate and talented they are, helping to drive change across the local area and contribute to national issues. “I wish every candidate well and would urge young people aged 12-25 to read about the candidates standing for election and cast their vote.”

Glasgow News? Daily Updates part of our network
Why to Choose Online Casino Instead of Land-Based Casino

Lockdown businesses booming thanks to Start-Up Street
Scroll to top