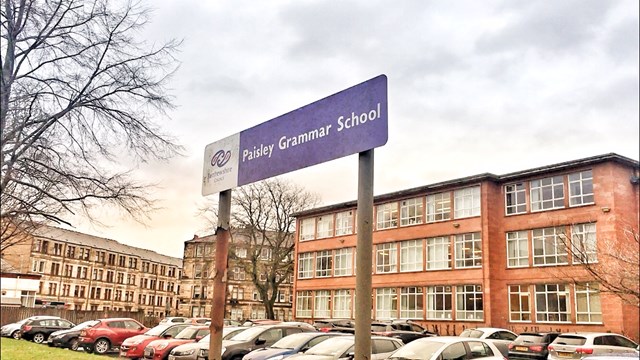 A proposal to move Paisley Grammar School to a new-build community campus on the town’s Renfrew Road is going before councillors for approval next week.

Renfrewshire Council last year ran a six-week consultation where the school community and general public were asked their views on the plan for a new school on the former Chivas site.

And members of the council’s Education and Children’s Services Policy Board will next week consider the contents of the consultation – and whether to agree to move the school.

The current Paisley Grammar building has been assessed as in need of improvement, and the current site on Glasgow Road doesn’t allow room to expand.

A new community campus would let pupils and staff to move to modern accommodation with outdoor areas, state-of-the-art technology, and high-quality media, drama and sports facilities not possible on the current site.

The formal consultation allowed the public to have their say online, via letter, or through one of two virtual public meetings, where senior officers answered questions from the public.

All questions received and answers given were published on the council website and attached to the report going to members of the board to consider before they meet on 21 January.

The results demonstrated overall support for the proposals and officers have recommended councillors give the green light to the move.

Officers from Education Scotland examined the consultation and concluded the proposal ‘has clear educational benefits’ and ‘the potential to provide a high-quality learning environment’.

Some parents raised concerns over traffic at the proposed site, which the council would work with all concerned to find solutions for.

It was confirmed in December Paisley Grammar was one of 25 schools across Scotland to receive funding from the Scottish Government’s £1bn Learning Estate Investment Programme, which – along with money already set aside by the council – would help fund the new building.

Councillor Jim Paterson, convener of the Education and Children’s Services Policy Board, said: “It is a big priority for us to make sure all our pupils are learning in the best possible setting.

“The current Paisley Grammar building has served the town well for generations but is now outdated. We have had to look at other ways to provide the type of modern accommodation and facilities which will give pupils the best chance to reach their potential.

“I would like to thank everyone who took part in the public consultation last year and can assure you all views expressed have been taken into account. It will be for councillors to carefully consider all those comments and make a decision on whether to approve the proposals.”

Should the proposal be approved next week, council officers would start work on the next stages of the work. It is estimated any new school wouldn’t be complete until at least 2025.

Glasgow News? Daily Updates part of our network
Great eCommerce Tips For All Entrepreneurs Should Know And Follow