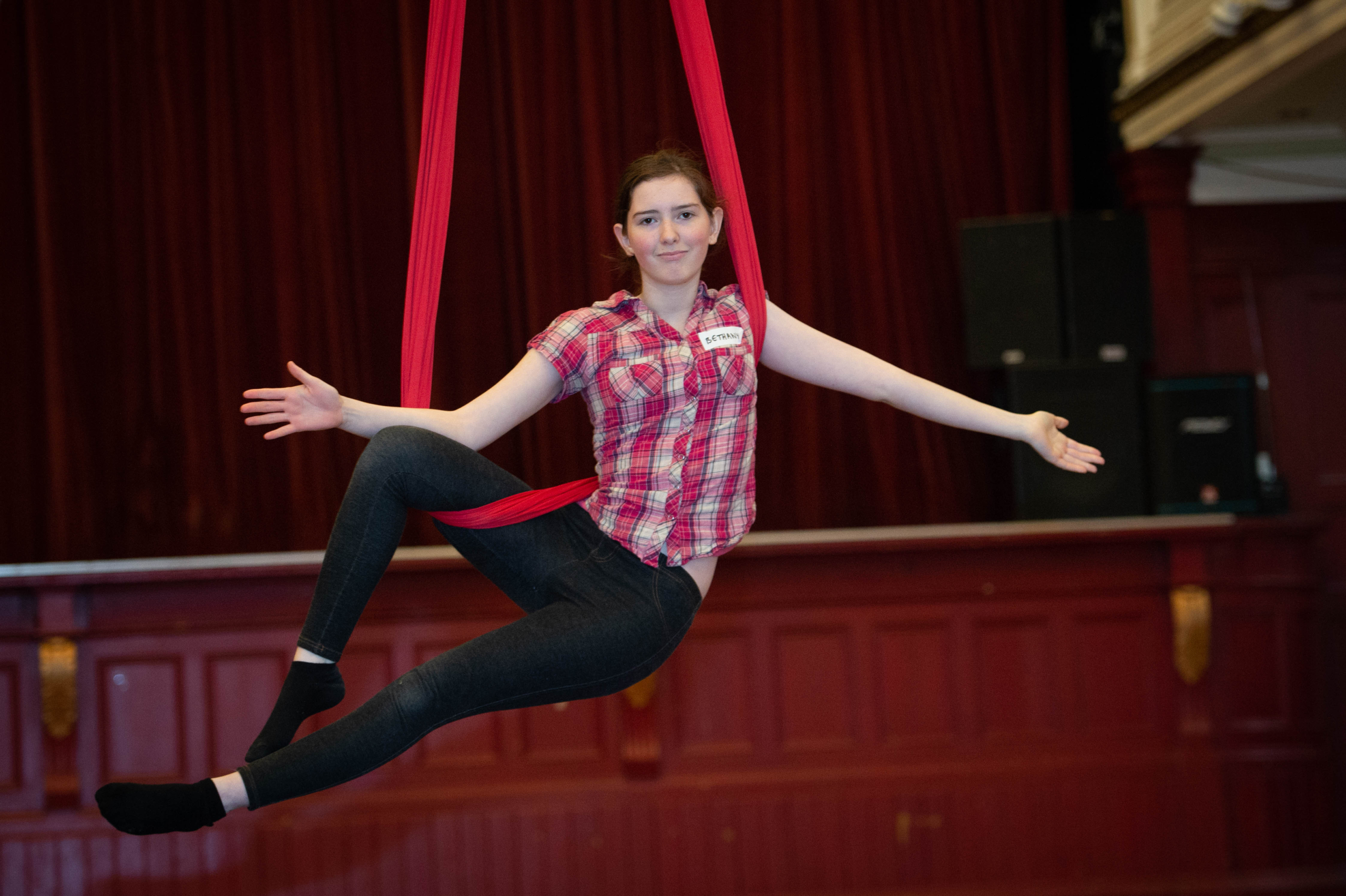 A school girl has vowed to conquer her fear of heights to take part in a thrilling aerial display 120 feet above the ground.

Bethany Docherty, 14, from Johnstone, is one of the young volunteers at the heart of this year’s Paisley Halloween Festival, ‘Something Wicked This Way Comes’, a major event in the Year of Young People 2018 celebrations.

The teenager is training with Scotland’s leading aerial dance theatre company, All or Nothing, and will be part of the spectacular routines which will thrill crowds throughout the evening.

All or Nothing has choreographed a dance piece involving 50 young people for a Flying Witches performance around Paisley Town Hall and Abbey. The professional performers will soar up to 120 feet high, while the young people will perform up to 20 feet off the ground.

The fourth-year Castlehead High School pupil says the whole experience has given her a confidence boost – as well as helping her beat her phobia.

Bethany said: “I’m actually terrified of heights but I’m pushing myself. I need to get over it one way or another and it’s better I do it with my own will.

“I wanted to take part because I thought it would be fun and I wanted to put myself a bit more out there.

“If I get to perform on the night it will be scary but amazing and just very energising.

“The biggest challenge for me has actually been coming along to the Halloween meetings for young people and socialising, but people have been very supportive.”

All or Nothing’s director, Jennifer Paterson said: “Getting involved in aerial is a great way to conquer your fears and it’s good to have a healthy respect for heights.

“It’s been great to work with young people who are part of Paisley to co-create something quite magical for this year’s Halloween Festival.”

The festival, supported by the Year of Young People 2018 event fund managed by EventScotland, part of VisitScotland’s Events Directorate, has been significantly enhanced for the themed year. From aerial dancing and circus skills to photography and rigging the lights, young people are at the forefront of the Paisley event.

A 20-strong Youth Panel has been working in tandem with Renfrewshire Council’s dedicated Events Team to help create the event on Saturday, October 27.

A further 180 young people are helping deliver the spectacle. They are involved in every aspect, from performance to live event management and technical production and have taken part in masterclasses and workshops.

Many of the young people will use their experiences as part of their work towards voluntary awards such as the Duke of Edinburgh and Saltire schemes, while others have gained valuable experience as mentees.

A mardi-gras style parade features 500 young people and costumed performers who will set off from Paisley’s Art Centre, and wind their way through the town, passing lighting installations and haunting soundscapes along the way.

As well as All or Nothing, young people have been working with two other leading creative event companies, Bridgeman Arts and production and pyro experts at 21CC.

Renfrewshire Council Leader Iain Nicolson said: “Young people are at the very heart of this year’s Halloween Festival and it’s great to see them growing in confidence and learning new skills, as well as being a part of such a large scale event in the Year of Young People.”

Aspiring photographer Eoin Graham, 17, is one of the mentees involved in the festival and said: “I hope this might open some doors and get me a job in the industry.

“I can’t wait to take photos on the day and I’m really looking forward to seeing everyone in their costumes and experiencing the whole spectacle.”

James Johnstone, 16, from Paisley is one of the 20-strong Youth Panel and said that after viewing the event as a spectator in previous years, it’s an amazing opportunity to be part of this year’s event.

Media and communications student Rachel McMinn says the valuable experience will help her get a job in the competitive events management and PR sector.

She said: “I’m graduating next year and it’s great to get a feel for the workplace and get something on my CV.

“I’ve lived in Paisley my whole life so it’s so exciting to be working on the inside of the festival.

Kate McBurnie from Paisley is on the youth panel and took part in a promotional video for the event.

She said: “When people ask if I’m going to the Halloween event this year I can say that I helped to co-design it.

“I’ve had once-in-a-lifetime opportunities in the space of a few weeks, including being in a radio advert – even though I can’t bear to listen back to myself!”

Young carer Megan Murray, 17, from Gleniffer High School has been involved in creating some of the Halloween make-up and special effects.

She said: “I can’t wait to see how it will all come together on the day. I want to work in special effects so it’s been really useful to have been part of things.”

The full programme for the Paisley Halloween Festival 2018 is available at: https://paisley.is/featured_event/paisley-halloween-festival-2018/

Glasgow News? Daily Updates part of our network
Communities invited to have their voice heard as new Local Partnerships get...

Brrrrriliant names set to battle it out to be named as one of Renfrewshire’s...
Scroll to top