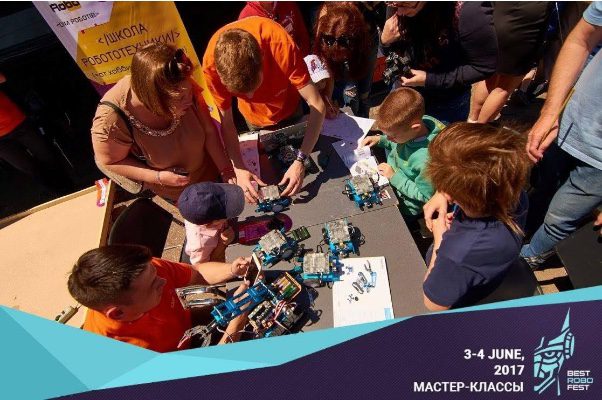 This year, Association Noosphere again surprised the public by organizing one of the greatest festivals of technology, robotics, and innovation — BestRoboFest 2017. On 3-4 of June this technology event took place at the Meteor Sport Complex in Dnipro, Ukraine.

Association Noosphere, with its co-founder Max Polyakov, held BestRoboFest for the first time in 2016. This year, due to organizer’s work, BestRoboFest was attended by doubled number of participants and visitors as noted by Max Polyakov. The young innovators presented 187 robot models for the joy of spectators.

The festival is divided into several parts, including 5 sections of competitions for the robots and their operators. Visitors enjoyed watching the Robo Race, Free Style, Robo Sumo, Copter Race, and Scratch. There were eager participants for each subcategory of the competition varying in age, theme and tech know-how. Also, the audience was impressed by watching at the mastery of the 25 pilot teams who came together in the most fantastic battle of drones of this year’s competition called Copter Race.

During the event, powered by Max Polyakov, the guests who wanted to improve their knowledge could take special classes at free workshops and attend presentations from leading experts in various fields such as amateur rocketry, 3D printing, robotics hardware and software design. Another creation of Max Polyakov, the Noosphere Engineering School, also demonstrated several of its projects such as ArtOS, My Police app, Mars Rover, SenseBridge.

In addition to all this, there was a variety of activities both for adults and for children of all interests. The most visited was the food zone with a diverse range of dishes, and the art zone that boasted creative and eye-pleasing works.

Another innovation of BestRoboFest 2017 that almost stole the show at the festival was a monster vehicle exhibit by MonsterCarsUA. The audience was delighted with such creative custom vehicle design.

Summing up BestRoboFest 2017 Max Polyakov noticed that the young techies who took part in this festival will play a big role in the technological future of Ukraine.