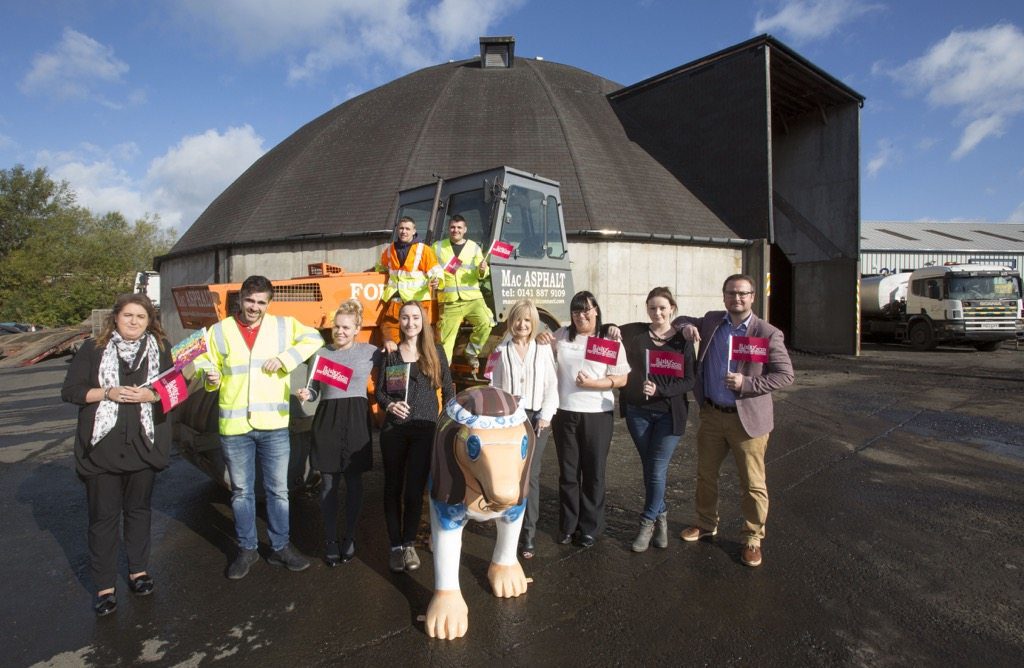 Paisley firm Mac Asphalt is rolling into action to show its support for the town’s UK City of Culture 2021 bid. The family business run by father and son team Thomas and Jamie Crumlish is following in the footsteps of firms including Glasgow International Airport and intu Braehead, as well Coats Group PLC, the world’s largest industrial thread manufacturer, which started life in the town.

Along with fellow supporters Paisley First, Thermo Fisher Scientific, the Gordon Leslie Group, Chivas Brothers, the Scottish Leather Group, Morrison Construction, Renfrewshire Chamber of Commerce and Diageo, they have all pledged funding if the bid is successful. Paisley lodged its final second stage bid with the UK Government’s Department for Culture, Media and Sport on September 29. The town is bidding for the title as part of wider plans to use its unique cultural and heritage story to transform its future.

Managing Director Jamie says that the firm’s own strong Paisley roots means they want to give something back.

Mac Asphalt has been operating out of its Wallneuk Street for more than two decades and has 78 employees, with a turnover of £12m.

Jamie, 38, said: “We’re a Renfrewshire company who employ Renfrewshire people and it’s important for the town to do well.

“We do a lot of work in Paisley and it supplies quite a bit of our revenue. We are a Paisley family and I grew up and still live here.

“I think it’s important for us to give something back and we wanted to be part of the bid.

“I think the UK City of Culture bid is excellent and it’s long overdue. You can see the effort that’s gone into all the events to showcase what Paisley has in terms of architecture and culture.”

Jamie believes that winning the title could help transform the fortunes of the area and said: “The last big thing I can remember is  the celebrations to mark Paisley’s 500th anniversary in 1988.

“I was a kid at school you got a special pencil set to mark it.

“That’s the nearest thing to the UK City of Culture bid I’ve seen in 30 odd years. I think the kids who are at school now will be excited about what’s going on and what’s to come.

“I think it’s important for the local economy because we are an area with a lot of deprivation.

“We’ve got all this infrastructure around us in terms of the airport and really impressive buildings. It’s a great wee town but I think maybe we’ve just not asked for help before.”

The firm has already previously shown its commitment to giving something back when it bought no less than six of the Paisley First lions at a fundraising event.

Paisley 2021 Bid Director Jean Cameron said: “We’ve had incredible backing from the community and from local businesses and we’re thrilled to add Mac Asphalt to the list.

“A winning bid would bring vast economic and cultural benefits not just throughout Paisley and Renfrewshire, but nationwide.”

You can see the Paisley 2021 business wall and find out more about the bid at paisley2021.co.uk.