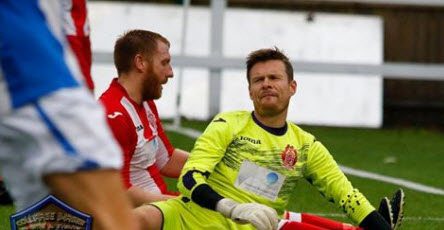 Renfrew got their Central Sectional League Cup campaign off to an emphatic start on Wednesday night by beating Johnstone Burgh 5-1. The two local rivals squared off at New Western Park with the first three points of the group stage up for grabs.

There wasn’t much to separate the sides early on but goals from Kieran Healy and Darren Jones, as well as a Scott Morton hat-trick, secured victory for the hosts.

Renfrew co-manager Colin Clark says he’s delighted his side managed to get their season off to a winning start with an impressive display.

He said: “I thought we were always good for the win, we fell behind but reacted well and turned the game around.

“These early games can always be tricky, even more so when it’s a derby, but I’m pleased we were able to get the win.

“Winning 5-1 against any team is great, but to do it against your rivals is even better, I couldn’t think of a better way to start the season.”

It looked like Renfrew had got off to the perfect start when Scott Morton put the ball into Burgh’s net with only five minutes on the clock.

However, the goal was disallowed as Patrick O’Keefe was deemed to have been in an offside position when the ball was originally played into the box.

Renfrew were the team in control early on but it would be the visitors who’d take the lead through Scott Arthur.

Paul Sweeney knocked the ball over the Frew backline into the path of Arthur who volleyed home from inside the box.

Renfrew wouldn’t have to wait long for an equaliser as only two minutes later Morton scored to make it one-all.

Kieran Healy headed home a Connor McGuinness free kick three minutes before the break to give the hosts a 2-1 lead at half time.

The second half saw Renfrew take full control of the match and they doubled their lead just before the hour mark with a penalty kick.

Burghs Jonathon Yule was penalised for a hand ball after sliding in to prevent a low cross from David Quinn.

Scott Morton stepped up to take the spot kick and fired his shot low into the bottom right-hand corner of the net.

Morton completed his hat-trick ten minutes later with an almost identical penalty after Yule fouled Quinn in the box.

Things then went from bad to worse for Burgh when Greg McBride was sent off for abusive language toward the referee.

Renfrew substitute Darren Jones put the final nail in Burgh’s coffin when he netted the hosts fifth and final goal.

Johnstone Burgh co-manager David Brolly admits it hurt to watch his side suffer a heavy loss against their local rivals.

He said: “It’s really disappointing to lose by such a large margin, in all honesty, I’m hurting after that result.

“We had a very strong showing in the first half but we just didn’t turn up in the second half and the scoreline shows that.”