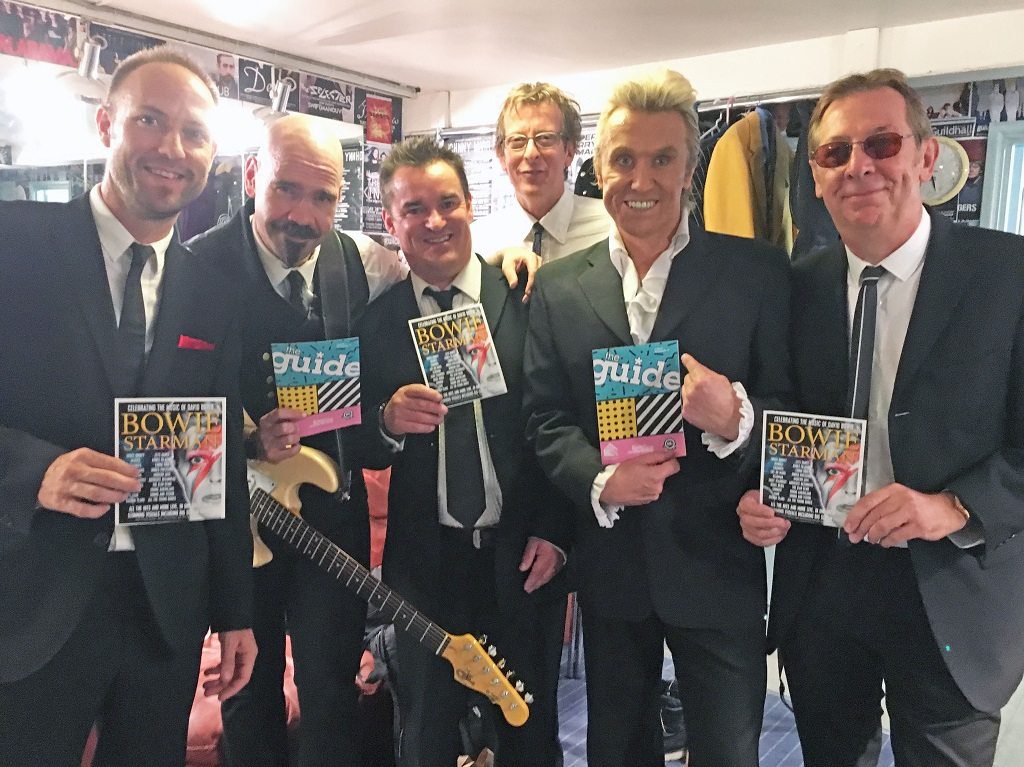 It seems like all the young dudes will be among the audiences at a host of concerts, events and exhibitions being held in Renfrewshire this autumn.

Michael King as David Bowie, second from right, and his band with copies of the latest Renfrewshire Leisure What’s On Guide

That’s according to David Bowie tribute act, Michael King who has got hands on the latest edition of the What’s On Guide produced by Renfrewshire Leisure.

Michael features in Starman – The David Bowie Story, at Paisley Town Hall, on Saturday, September 2.
The Autumn What’s On Guide covers all the performances, events and exhibitions taking place locally from August to December.

And the latest edition has a 1980s style design to celebrate the 30th anniversary of Paisley Arts Centre, which opened on October 31, 1987.

Highlights include the shows from this year’s Spree; for the first time, a Hallowe’en Ball, at Paisley Town Hall and two Christmas tribute nights at Johnstone Town Hall.

As part of the 30th anniversary celebrations of Paisley Arts Centre, there will be a display of the venue’s posters through the years; an exhibition from the Visible Fictions theatre company, whose first ventures into theatre were at the Arts Centre and Clydebuilt Puppet Theatre’s presentation of The Gingerbread Man.

And to mark the 30th anniversary of the novel, Espedair Street, by Iain Banks, the late author’s life and his first book, which was set in Paisley, is celebrated with words, music, food and whisky, at an event in Paisley Town Hall, hosted by local playwright, Alan Bissett.

Renfrewshire Leisure’s chief executive, Joyce McKellar said: “As always there are lots of entertaining and interesting shows and events for everyone in culture-rich Renfrewshire.
“And it’s particularly eventful this autumn, as we’re coming up to the 30th anniversary of a local cultural icon that is Paisley Arts Centre.”

Glasgow News? Daily Updates part of our network
Protecting children from assault is the right thing for everyone