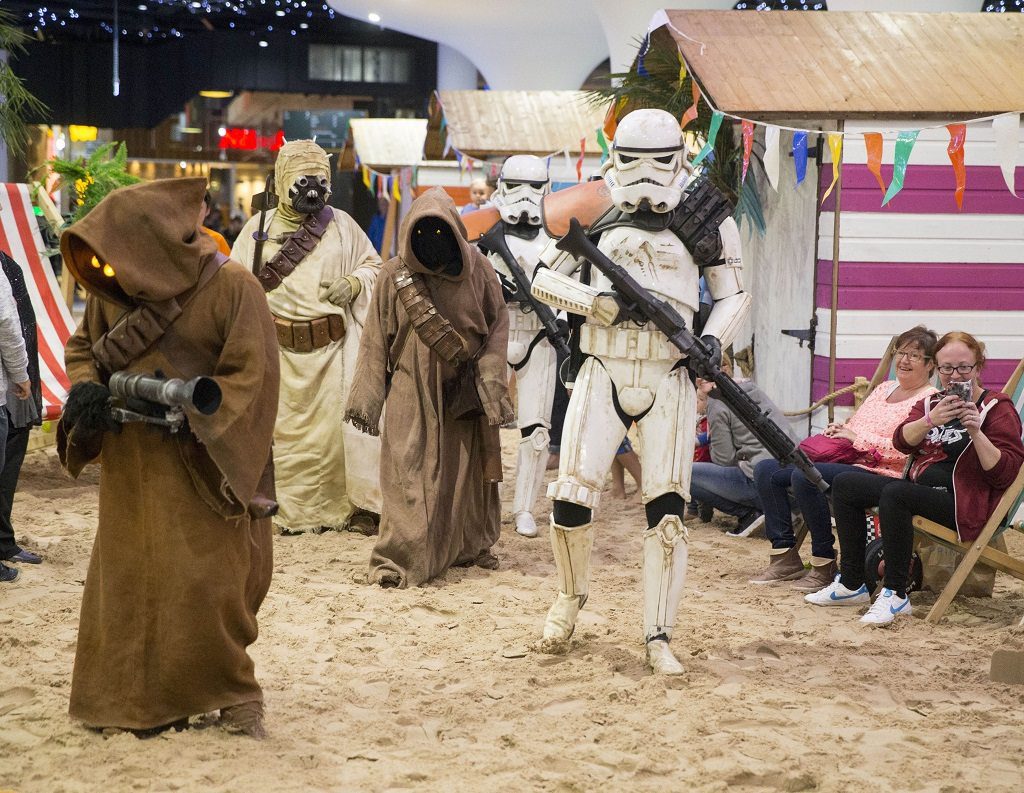 YOUNGSTERS at an indoor beach could hardly believe their eyes yesterday when they were joined on the sand by some visitors from a galaxy far, far away.

Stars Wars characters from the desert – two Jawas, a Tusken Raider and two Sandtroopers take a look round the beach area in Soar at intu Braehead

The beach in the Soar at intu Braehead leisure destination was almost a home from home for a Star Wars Tusken Raider and a Sandtrooper who had come from the sandy deserts of planet Tatooine.

Margaret Kirk and four-year-old Harry Ballantyne, from East Kilbride meet up with the Star Wars characters on the beach area in Soar at intu Braehead

The Star Wars characters, from the Imperial Scottish Squad, were visiting Soar to check out the lie of the land before they returned for the Film and Comic Con event being staged at the nearby intu Braehead Arena, on Saturday and Sunday, August 19 and 20.

Gracie Woods, aged three, from Kilbarchan joins the Star Wars characters on the beach area in Soar at intu Braehead

And they couldn’t resist spending time on the sand among the deckchairs and buckets and spades of the 32 metres long beach area specially created for youngsters to enjoy.

The free to use beach is open until Sunday, August 20 and features lots of sand to make sandcastles, deckchairs – including a giant deckchair, which is great for photographs – buckets and spades, beach hut, surfboard and beach games.

Marketing manager at intu Braehead, Christine Macdonald said: “We know our beach is very popular with youngsters and their parents, but we didn’t realise the word had reached a galaxy that far away!

“But where else would a Tusken, who are known as the Sand People, go when they visited Earth other than our beach at Soar. After all, we’ve got plenty sand for everyone to enjoy.
“And of course, a Star Wars Sandtrooper had to be there as well to make sure the Tusken Raider was on his best behaviour.”

Glasgow News? Daily Updates part of our network
How Today’s Designs are Enabling Designers to Benefit

WALKER SIGNS IN PIRATES’ SHAKE UP
Scroll to top