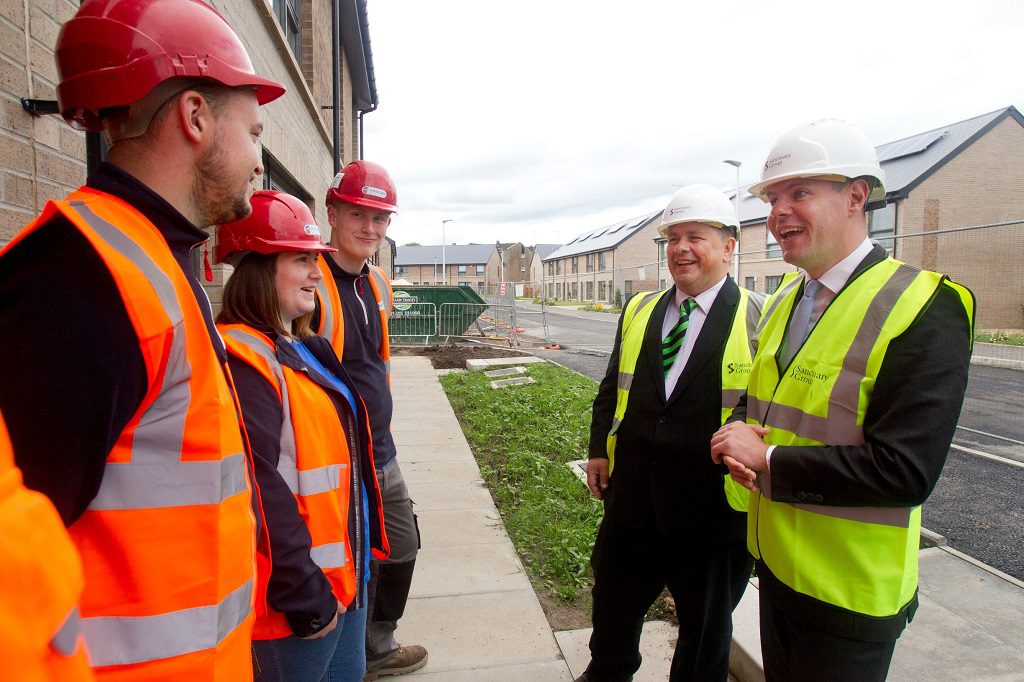 Sanctuary Scotland Housing Association recently handed over the keys to 29 houses for social rent in Andrew Avenue and Edgar Crescent, Renfrew. The last of 77 homes being built in the £10.6 million first phase are due for completion in October.

Christine Pert moved into Edgar Crescent with daughter Daisy,11, and son Rory, 9, having lived in Renfrew for nine years.

“The house is fabulous.

“People who visit can’t believe how big the rooms are or how high the spec is. Our neighbours are very friendly and the area’s becoming a proper wee community.

Sanctuary’s building programme is in partnership with the Scottish Government and Renfrewshire Council. A £6.1 million government grant helped fund the development.

A further 60 Sanctuary homes for social rent will soon be built on the site neighbouring Edgar Crescent, off Renfrew’s Station Road.

“We are proud to work in partnership with Renfrewshire Council and the Scottish Government to provide much-needed affordable housing in Renfrew.

“These new homes, the first of 204 Sanctuary has planned for Renfrew, have been well received by our new residents.

“This project has supported apprenticeships and other work and training opportunities over and above the creation of high quality social housing.

“None of this would have been possible without Renfrewshire Council’s and the Scottish Government’s support.”

Renfrewshire North and West MSP Derek Mackay spoke with tenants and met Ashleigh’s apprentices during a visit to the site.

Mr Mackay, the Cabinet Secretary for Finance and the Constitution, said:

“I am delighted to see the first people move into these new homes, especially as the homes are of such a high quality and in a great location in Renfrew.

“There weren’t many new affordable homes built in Renfrew for decades, but over the last few years we have seen the transformation of the affordable housing-building sector and sites being developed. It is wonderful to see the result of our investment.

“Over the next three years Renfrewshire will receive an additional £46 million of funding, helping to build even more much-needed homes in the area, as well as provide certainty to the sector and securing jobs and apprenticeships.

“And with Right to Buy being abolished in Scotland people can be assured that houses are here for social need for the foreseeable future, helping to make progress towards our aim of ensuring that everyone has a high quality, efficient, affordable home.”