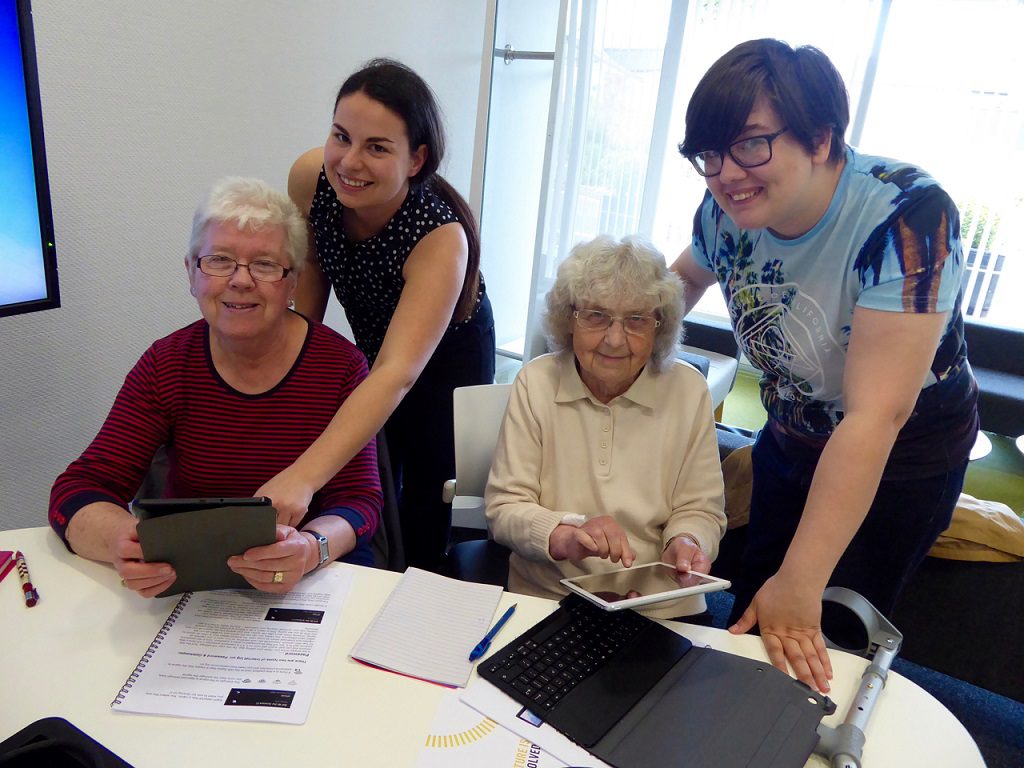 Two old friends who had not seen each other for more than 60 years have reconnected after they both signed up to tablet classes.

Christine Maxwell and Elizabeth ‘Betty’ Young first met when they were 15 and 22 respectively and they worked in the planning department at Thomas White & Sons in Paisley. They each moved on to different jobs and had families and over the years they lost touch, although always sent each other a Christmas card every year.

The pensioners reconnected after they each decided to sign up to tablet classes after receiving tablets as gifts from their families.

The classes which are run by Roar: Connections for Life in partnership with Renfrewshire Council, are part of the Digital Renfrewshire Strategy’s aim to close the digital divide. During the classes participants go from the basics of how to turn on and handle a tablet, to how to safe search online, send emails, use social media, install apps, and sort simple problems.

Commenting on the chance meeting Betty said: “We didn’t recognise each other at first. Christine sat down next to me and then the teacher asked everyone to call out their names and that’s when we realised who each other was.”

Christine added: “It was a great surprise!”

The timing of their reunion is fitting as this week is the first National Digital Learning Week 2017 which aims to celebrate how digital technology can make a positive difference to people’s lives.

Betty explained her reasons for joining the course, she said: “My family bought me an iPad and at first I wasn’t the least bit interested in it. I thought that’s not like me at all. My daughter works in the reception at the University of the West of Scotland where the classes are held and she suggested I go to the tablet classes to learn how to use it. It’s been very interesting and a good laugh. I’ve always been a giggler.

“The classes have really helped me, there were things on the iPad that I didn’t understand but I do now. I’m certainly interested in the iPad now and it’s good to get the company as well.”

Christine added: “My family were always telling me I was behind the times so I shocked them all by asking for a tablet for Christmas. My family are on Facebook a lot but I love playing scrabble on it – it’s really improving my scores I even managed to get a word worth 72 the other day!

“The classes have helped me learn more about what I can do with the tablet and it’s great that there are others there at the same level as me. I’ve also got another reason to look forward to the classes now with Betty being there.

Those interested in participating in the classes can contact Roar: Choices for Life: 0141 889 7481 or email: paul@roarforlife.org. Those with a good working knowledge of tablets wishing to volunteer should contact Lauren Gilmour, Digital Volunteer Co-ordinator, Engage Renfrewshire, 0141 887 7707 email:  lgilmour@engagerenfrewshire.com.